Bacteria may require adequate nutrition, optimum pH, temperature and oxygen for multiplication and growth. Bacteria can be classified into following types on the basis of nutritional requirement:
I. On the basis of energy sources:
a. Phototrophics which get energy from photochemical reaction.
b. Chemotrophics which get energy from chemical reaction.

II. On the basis of their ability to synthesize essential metabolites.

a. Autotrophic: These are the organisms in which all essential metabolites are synthesized from inorganic sources.
They use carbon dioxide as the main source of carbon and simple inorganic salts, e.g. nitrates, nitrites, ammonium sulfate, phosphates, etc. to form new protoplasm of the cell.

b. Heterotrophic: Here some of the 00sential metabolites are not synthesized. Organic compounds, e.g. protein, peptones, amino acids, vitamins and growth factors are supplied from outside. Most of the bacteria producing disease in man are heterotrophic.

Hydrogen and oxygen are made available from water added to culture medium. Heterotrophic bacteria require organic carbon for growth in a suitable form and can be assimilated by the bacteria. Carbohydrate is principal source of carbon which is degraded by the bacteria either by oxidation or by fermentation. Thus providing energy in the form of adenosine triphosphate.

Nitrogen is a major component of protein and nucleic acids and its main source is ammonia usually in the form of ammonium salt. The ammonium salt is made available either from environment or it may be produced by deamination of amino acids by bacteria

Sulfur forms part of the structure of several coenzymes cysteinyl and methionyl side chains of proteins. Most bacteria use sulfate (SO4 ) as a sulfur source and reduce it to hydrogen sulfide.

Phosphorus is required as a component of nucleic acid ATP coenzyme NAD, and flavins. It is always assimulated as free inorganic phosphate.

2. Mineral salts They are potassium, calcium, magnesium, iron, copper, manganese, molybdenum and zinc required in traces for enzyme function and can be provided in tap water or as contaminant of other medium ingredients.

3. Growth factor These may be essential for some who do not grow in their absence. Following a gene mutation of bacterium, there results in failure of one of the enzymes to synthesize amino acids or
purines or pyrimidines from simpler compounds. In such case exogenous supply of relevant factor is required called accessory growth factors. 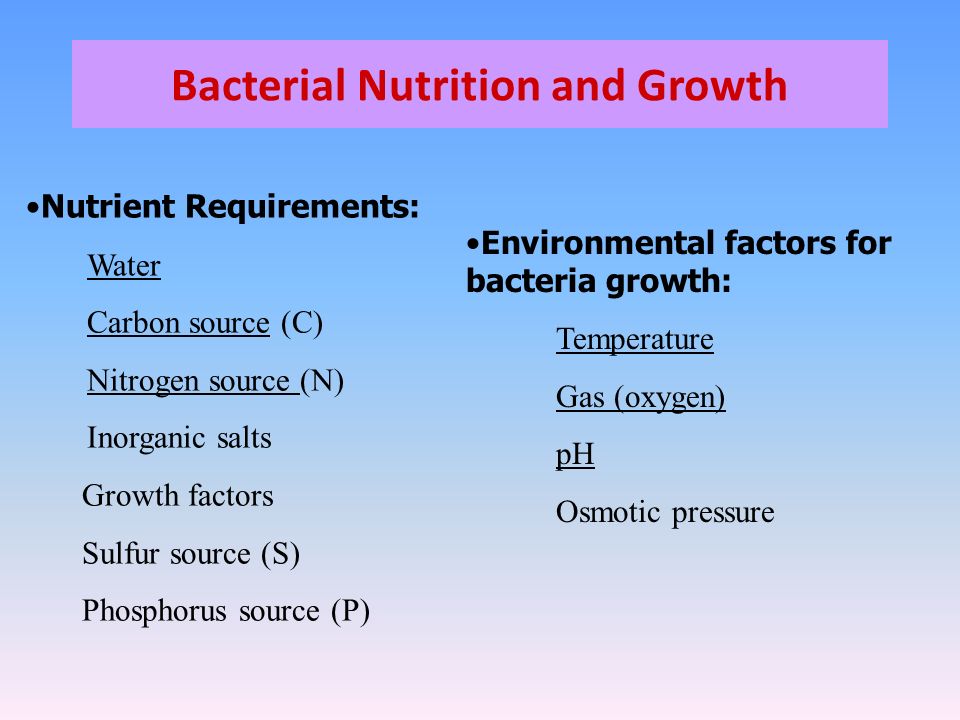 The other nutritional requirements are as under:

a. Oxygen: The capacity of bacteria to grow in the presence of oxygen and to utilize it depends on possession of a cytochrome oxidase system.

Aerobes: The aerobe organisms grow only in the presence of oxygen, e.g. pseudomonadaceae, bacillus, nitrobacter, sarcina, etc. They require oxygen as hydrogen acceptor.

Facultative anaerobes: They are the organisms that can live with or without oxygen, e.g. vibrio, Escherichia coli, Salmonella, Shigella and Staphylococcus. The microaerophilic organisms grow well with relatively small quantities of oxygen, e.g. Hemophilus.

Obligate anaerobes: The strict anaerobes multiply only in the absence of oxygen, e.g. Bacteroides, Clostridium. They require a substance other than oxygen as hydrogen acceptor.
The toxicity of oxygen results from its reduction by enzymes in the cell (e.g. flavoprotein) to hydrogen peroxide and even more toxic free radical superoxide. Aerobes and aerotolerant anaerobes are
protected from these products by the presence of superoxide dismutase, an enzyme and the presence of catalase. There is one exception to this rule, i.e. lactic acid bacteria; aerotolerant anaerobes that do not
contain catalase. This group however, relies instead on peroxidases. All strict anaerobes lack superoxide dismutase, catalase and peroxidase. Superoxide dismutase is indespensable for survival in presence of oxygen.

Hydrogen peroxide owes much of its toxicity to the damage it causes to DNA. DNA repair deficient mutants are exceptionally sensitive to hydrogen peroxide. The rec A gene product has the function of both genetic recombination and repair. It is said to be more important than either catalase or superoxide dismutase in protecting Escherichia coli against hydrogen peroxide toxicity.

b. Carbon dioxide: The metabolic activities of some organisms like Neisseria gonorrhoea, Brucella abortus are greatly enhanced by the presence of extra-amount of carbon dioxide (capnophilic bacteria) in atmospheric air.

Bacteria require water for their growth. Desiccation may kill most of bacteria.

They are not synthesized by bacteria and so supplied in media.
Bacterial growth in vivo depends upon:
• Availability of nutrition with human body
• Generation time of bacteria
• Cellular and humoral defence of host, i.e. human body
• Redox potential
• pH