The ovary is part of the female reproductive organ of the flower, or gynoecium, in flowering plants. Specifically, it is the part of the pistil that holds the ovule(s) and the base of the petals and sepals is located above or below or at the point of connection. The pistil may consist of one or more fused carpels (e.g., tricarpels) and the ovary may therefore contain parts of one or several fused carpels. The style and stigma are above the ovary, which is where the pollen lands and germinates to grow down to the ovary through the style and to fertilize one individual ovule for each individual pollen grain. There are significantly reduced and modified ovaries in some wind-pollinated flowers. 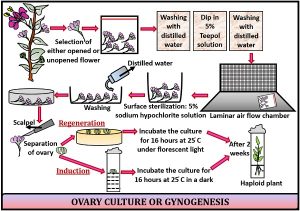 Ovule culture is an elegant experimental system by which ovules are aseptically isolated from the ovary and are grown aseptically on a chemically defined nutrient medium under controlled conditions.

An ovule is an integument-covered mega-sporangium. The ovules are attached through the funiculus to the placenta inside the ovary. A megaspore or egg cell is contained in an ovule. A single-cell zygote is formed after fertilization, which ultimately leads to the formation of a mature embryo possessing shoot and root primordia. Ovules in the nutrient medium can be isolated and cultured. The culture of in vitro ovules helps to understand the variables that regulate the development of a zygote into a mature embryo through organized phases. Alternatively, in the same culture as the excised ovule, it may be possible to germinate pollen and to induce in vitro fertilization and subsequently embryo production.

Importance and applications of ovule culture

The importance and application of in vitro ovule culture are discussed below on different specific aspects.

The development of the technique of test tube pollination and fertilization was an important achievement of research on ovule culture. It is possible to germinate pollen in the same culture as the excised ovum by this technique and to induce in vitro fertilization. In addition to their respective pollen grammes, the excised unfertilized ovules of Argemone mexicana, Eschscholtzia califormca, Papaver sonniferum, Nxcotxana tabacum, N.rustica were cultured. All stages of development from pollen germination to double fertilization were observed and the above experiments obtained mature seeds containing viable embryos. Using the same method, it was possible to fertilize the Melandrium album ovules with pollen grains from other Caryophyllaceae species and subsequently with Datura stramonium pollen. The incompatibility barrier in Petunia axillaris has been overcome using the ovule culture technique.

Application of ovule culture in hybridization

The F1 hybrid embryos frequently become abortive in the developing seeds in many interspecific and inter-generic crosses, or the F1 seeds are not able to support embryo development. The culture of ovules has been used successfully to obtain hybrid seedlings. It has been found that the hybrid embryo of Abelmoschus fails to develop beyond the heart or torpedo-shaped embryo in several inter-specific crosses.

By ovule culture, viable hybrids have been obtained in three out of five interspecific crosses attempted, namely, A. esculentus, A. ficuneus, A. esculentus, A. moschatus and A. tuberculatus, A. moschatus. Similarly, a true hybrid between Brassica chinensis and B. pekinensis has been obtained by culturing the fertilized ovule in vitro. A hybrid between Lolium perenne and Festuca rubra has also been obtained successfully by means of ovule culture.

There have been several attempts to hybridize between the various New World and Old World cotton species. Although successful crosses have been achieved between various cotton species, hybrid plants have not been obtained through the culture of fertilized ovules. But the development of seeds and the production of fibre from the cultured ovule has been shown. Exogenous hormones can also regulate the in vitro growth ovule and the development of fibre from the developing seed, and in this respect, cotton ovule culture provides a unique method for studies on the effect of phytohormones on fibre and the development of seeds.

Uchimiya and others tried to cultivate Solanum melongena underutilized ovules and obtained vigorous callus formation on a medium supplemented with IAA and kinetin. Although the origin of the callus tissue was not known, it was revealed to be haploid in nature by a cytological assay. Thus, rather than anther or pollen culture, it is an important attempt to obtain a haploid cell line or plant from an alternative source.

It is generally believed that the formation of seedlings depends on some stimulus from the host root in mandatory root parasites such as Striga or Orobanke. Orobanche aegyptica and Cistanche tubulosa ovule culture studies have shown that the formation of shoots in vitro can be induced in the absence of any host stimulation.

In nature, orchid seeds only germinate in combination with a suitable fungus. As a result, numerous seeds are lost due to the lack of proper fungus availability. Besides this, it takes a long time for the seed capsules of many orchids to mature. Several attempts were made to cultivate the fertilized orchid ovule in vitro to overcome such problems. The fertilized ovules of Calanthe Veitch, Cypripedium insigne, Dendrobium no- bile and Phalaenopsis schilleriana were successfully grown by Poddubnaya-Arnoldi.

Induction of poly-embryo by ovule culture:

The artificial induction of poly-embryos holds great potential in horticultural practices. It has been observed that the nucellus of the citrus mono-embryonic ovule may be induced in culture to form adventive embryos. Such success is therefore very important. Virus irradiation through ovule culture: The ovule culture has proved to be decisively advantageous in the varieties of citrus that are otherwise impossible to free of virus.