There are about 6000 species of living echinoderms, and many fossil species are known. They are all marine, although some live in intertidal zones.

Simple organic molecules can be absorbed directly through the epidermis, but most food is obtained by predation, scavenging or suspension feeding. The gut is usually complete, with a mouth and an anus (although in a few species the anus is secondarily lost).

Locomotion is effected in many forms (e.g. starfishes) by tube-feet. The tubefoot is usually bottle-shaped. It has a central, fluid-filled cavity, and shape changes are effected by antagonistic circular and longitudinal muscles. An ampulla (bulb) at the proximal end of the tube-foot acts as a compensation chamber for fluid when the elongated (externally visible) part of the foot contracts. The end of the foot may have a sucker, and the foot can be used to haul the echinoderm along: thus the tube-foot has a local hydrostatic skeleton and is used primarily for locomotion in many groups of echinoderms. Muscular movement of arms, aided by spines, effects movement in brittlestars.

The surface of the echinoderm has a delicate epidermis which covers an endoskeleton of calcareous plates: these may move or be fixed, and may bear spines. Pedicellariae are minute, jaw-like appendages found on the body walls of starfishes. Perforation in some plates allows tube-feet to project through.

Respiration is generally through the body surface, but may be effected particularly by papillae, tiny gills, or by the tube-feet. Sea-cucumbers have cloacal filaments called respiratory trees. There is no true blood, but a ‘water vascular system’, which radiates into the arms and connects with the tube-feet, contains a fluid similar in constitution to coelomic fluid. In some species the coelomic fluid may serve a respiratory or circulatory function. Amoebocytes have aphagocytic, defensive function (arguably homologous to vertebrate macrophages), and cells morphologically and histochemically similar to lymphocytes have been described.

Wastes are generally voided via the body surfaces: specialized excretory organs are not found.

There is no cephalization; the nervous system is rather simple, consisting of a circumoral nerve ring with radial nerves extending from it to a nerve net.

In many echinoderm species reproduction can be effected asexually by fission. For sexual reproduction, the sexes are usually separate with external fertilization taking place. Development follows the deuterostome pattern: radial cleavage and the mouth developing from an opening separate from the blastopore. The ciliated echinoderm larva is bilaterally symmetrical, growing and (in many species) passing through several stages before metamorphosis to an adult. Many echinoderms exhibit impressive regeneration capacities. Similarities in embryonic and larval development point to links between the echinoderms and the chordates.

The sub-phylum Pelmatozoa contains the single class Crinoidea, the sea-lilies and feather-stars. These echinoderms are attached to the substratum or the colony, either permanently or during development, by a stalk from the aboral apex of the body. The oral surface faces upwards. The arms are sharply distinct from the oral disk and bear pinnules. Tube-feet are used for filter-feeding and for respiration. The sea-lilies are sessile, stalked forms; feather-stars swim. Many fossil forms are known, the earliest from the Cambrian Burgess shale (about 530 million years B.P.). An example is Antedon sp. (feather-star). 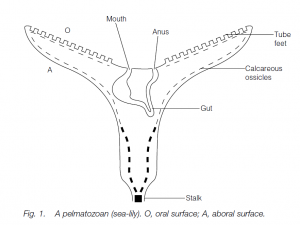 The Eleutherozoa lack a stalk; there are four classes:

(1) Class Asteroidea. The starfishes are typically pentaradiate with the arms not set off distinctly from the oral disk . They use their tube-feet as extensible, flexible, sucking devices for locomotion. Many feed on bivalve molluscs or suspension-feed using cilia. Pedicellariae help to kill small organisms which settle on the starfish surface. An example is Asterias rubens (starfish). 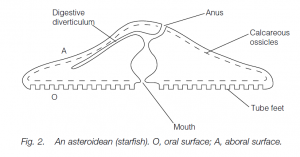 (2) Class Ophiuroidea. Brittlestars are also typically pentaradiate but their arms are sharply set off from the oral disks ; the arms contain articulating ossicles or ‘vertebrae’; spines give a spiked appearance. Brittlestars feed on small particles. An example is Ophiura sp. (brittlestar).

(3) Class Echinoidea. The sea-urchins, sand-dollars and their allies are pentamerous but lack arms: the oral surface extends over most of the globose body whose skeleton forms a test. Locomotion is by spines(which can also be long, protective and poisonous) and/or tubefeet. Five teeth and an Aristotle’s lantern allow the urchin to scrape algae off rocks. In heart-urchins and sea-potatoes, bilateral symmetry is superimposed on the pentaradiate symmetry: the mouth is ‘anterior’ and the anus is ‘posterior’. Heart-urchins burrow and lack the Aristotle’s lantern. An example is Echinus esculentus (edible sea-urchin). 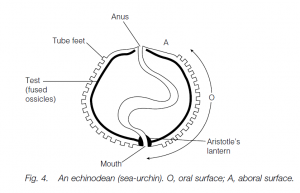 (4) Class Holothuroidea. The sea-cucumbers and beches de mer are elongated along the oral–aboral axis so that they lie on their ‘sides’. The oralsurface is greatly expanded. The endoskeleton is reduced within the muscular body walls. There are many tube-feet, extended to form 10 branched tentacles around the mouth. They suspension-feed or are selective detritus feeders. An example is Cucumaria frondosa (North Atlantic sea-cucumber).

There are about 100 species of arrow-worms, a phylum well preserved in the fossil record from about 500 million years B.P. These deuterostome coelomates possess bilateral symmetry and have a streamlined appearance. Most are active marine swimmers although a few exist on the sea bottom. Their small size allows gas exchange and excretion to occur through the body wall. The nervous system is simple, although cephalization is seen: there are two compound eyes.

Characteristic of chaetognaths are grasping spines on the head, used to seize prey. Chaetognaths are important components in plankton. They are hermaphrodites and reproduce sexually: fertilization is internal, miniature adults hatching directly from eggs shed into the water. An example is Sagitta elegans.

The lophophorates (bilaterally symmetrical, triploblastic coelomates) are probably deuterostomes, although the mouth often forms from or near the blastopore. The body comprises three parts: a prosome, mesosome and metasome, normally each with a separate coelomic compartment. There is a complex, U shaped gut and a tough outer cuticle. Diagnostic of lophophorates is a lophophore. This is a circular or U-shaped ridge bearing one or two rows of hollow, ciliated tentacles. The lophophore is used for feeding and for respiration. Adult lophophorates are sessile: the lophophore is used to capture plankton.

There are three related phyla:

(1) Phylum Bryozoa (= Ectoprocta; moss animals). Bryozoans are colonial animals living in a test secreted by the body wall; most are marine. The indiviuals within the colony (which is formed by asexual reproduction) are connected by tissue strands along which substances can move. The lophophore is retractable. Individuals in a colony, which may comprise millions of animals, may exhibit differentiation according to role, for example feeding, reproduction (cf. cnidarian polyp colonies). Sexual reproduction is also seen, with internal fertilization of eggs. An example is Plumatella repens.

(2) Phylum Brachiopoda (lampshells). This ancient phylum has animals with two-valved shells which can be closed to protect the soft brachiopod body. The shell valves are dorsal and ventral (rather than lateral as in bivalve molluscs). The lophophore lies within the shell: cilia beat to draw water into the shell cavity, and food is caught on the lophophore.

Brachiopods usually lie buried in sand or mud, the anterior protruding above the substratum and being supported by a worm-like stalk. Thephylum is well-known to palaeontologists: over 25 000 fossil species are known (compared with <400 species alive today), mostly from the Palaeozoic and the Mesozoic. An example is Lingula sp. 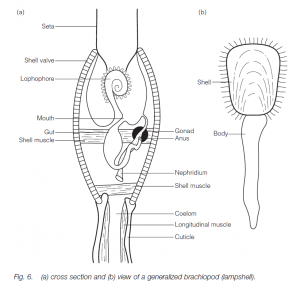 (3) Phylum Phoronida. This small phylum (15 species) is made up of sedentary marine worms living in sand or mud, or attached to rocks. They live in secreted, chitinous tubes. Cilia propel water down through the lophophore where food is trapped prior to transport to the mouth. An example is Phoronis australis.