There are about 900 species of nemertines ranging in length from less than 0.5 mm to more than 30 m. Most ribbonworms are marine, living in habitats from the intertidal zone to a depth of 4000 m in the ocean. Some are tubiculous (e.g. Tubulanus sp. living in a self-secreted mucus tube). There are a few freshwater nemertine species and Geonemertes sp. lives in damp soil in the tropics. Many nemertines exhibit vivid colors and some Emplectonema spp. are bioluminescent. Further classification (not covered here) of the phylum is based on the anatomy of the nervous system and the presence or absence of a proboscis stylet. Nemertines are known from Cambrian rocks; they may be derived from platyhelminth ancestors. An example is Lineus longissimus (bootlace worm).

Nemertines are bilaterally symmetrical, triploblastic acoelomates. The body is unsegmented. There is a basement membrane between the ectoderm and the mesoderm which forms a firm, elastic cover to the extensive longitudinal and circular muscles. 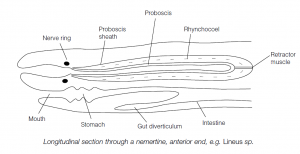 The nemertines are characterized by a long, anterior, eversible proboscis (used to explore the environment and to ‘lasso’ prey); when not in use, the proboscis is retained within a cavity known as a rhynchocoel. Most nemertines are carnivores. Muscular pressure on the fluid in the rhynchocoel everts the proboscis which may have a venomous stylet at its tip. Prey are sucked into the mouth, or juices are sucked out. The proboscis may be used for defense and it can be shed, whereupon a new proboscis regenerates. Nemertines have a ‘complete gut’ with a mouth and an anus.

Use of antagonistic longitudinal and circular muscles facilitates burrowing; swimming can be effected by lateral undulations of the body; they can crawl by ciliary creeping using cilia on the integument, or by peristalsis-like waves of the body musculature.

Nemertines possess a closed blood vascular system with contractile vessels containing blood which may have pigments of different colors: hemoglobin is sometimes present. Respiration is by integumentary diffusion.

There is considerable cephalization. Several hundred eyespots may be present. Nemertines have a lobed ‘brain’ (cerebral ganglia) and longitudinal lateral nerve cords.

Asexual reproduction is by fragmentation. Sexual reproduction is also seen: the sexes are usually separate. Temporary gonads develop in the parenchymatous mesoderm tissue: these open to the outside by means of gonopores. Eggs are laid in strands in the water where fertilization occurs. The eggs develop (by spiral cleavage in a protostome fashion,  directly to adults or via a dipilidium larva. The hermaphroditic terrestrial Geonemertes spp. Are viviparous.