Plasmids are extra-chromosomal circular, double stranded DNA material present in cell cytoplasm. They may autonomously or may be in episomal state.

They are present in most of the species but not in all strains of bacteria. They are ranging in size from about 0.2 to 4 % that of the bacterial chromosome. Under most condition of growth they are dispensable to their host cell.

Lederberg (1952) gave the name Plasmid as genetic name of the extra chromosomal DNA. 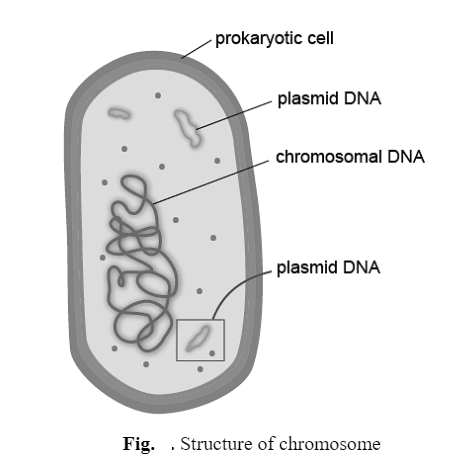 1) They are circular molecule of double-stranded DNA

2) Six basic rules which are applied for replication of DNA are also applicable for plasmid.

3) State of plasmid – Mostly plasmids are circular but in some cases linear plasmid are also observed. e.g. Streptomyces

4) Size of plasmid – The size of plasmid varies from 1×10° to 1 x 10° (0.2 to 4 %) of bacterial chromosome. The 1×108 size big plasmids are observed in Pseudomonas and Agrobacterium Most of the plasmid studied in the enterobactericeae family are divided in two groups,

7) They can exchange their genetic material with other plasmids.

8) They can exchange the genetic material with their host chromosome. An episome is a plasmid that can exist either with or without being integrated into the host’s chromosome.

9) They can exchange the genetic material with bacteriophage DNA.

10) Some plasmid contains gene for drug resistance and gene for toxin production.

11) Most important property is that these plasmids are not absolutely required to be present in cell Le. they are not indispensable to cell e.g. drug resistance, if drug is present in medium. Their genetic information is not essential to the host, and bacteria that lack them usually function normally.

12) Plasmid curing – Characteristically, plasmids can be eliminated from host cells in a process known as curing. Curing may occur spontaneously or be induced by treatments that inhibit plasmid replication while not affecting host cell reproduction. The inhibited plasmids are slowly diluted out of the growing bacterial population. Some commonly used curing treatments are acridine mutagens, UV and ionizing radiation, thymine starvation, and growth above optimal temperatures.

Many plasmids contain genes that have value in particular environment, and often these genes are the main indication that a plasmid is present. For example, R plasmids render their host cells resistant to certain antibiotics, so in nature a cell containing R plasmid can better survive in environments in which a fungal antibiotic is present. Plasmids are heavily dependent on the metabolic function of the host cell for their reproduction. They normally use most of the replication machinery of the host and hence have been useful mode is for understanding certain features of bacterial DNA replication. A number of plasmid per cell may vary from 1-3.

Different plasmid confers/imparts different functions or properties to the cell. These properties are as-

a) Metabolism of carbohydrate – Certain plasmid are responsible for conferring the property of metabolizing carbohydrates like sucrose and lactose.

b) Metabolism of protein –Ti plasmid in Agrobacterium sp. impart the property of metabolizing opine Le. a type of protein.

d) Fixation of N2 –Nif plasmid in Rhizobium sp. is responsible for imparting the property of nitrogen fixation.

b) Haemolysin production – Col V in E. coli and Hly plasmid in S. aureus are known to synthesize heamolysin that causes haemolysis of host RBCs.

In many bacterial species plasmids are responsible for a particular type of gene transfer between individual cells. It is a replicon, which is stably inherited in an extra chromosomal state. Plasmids are by far the most extensively used, versatile, and easily manipulated vectors. Generally plasmids used as gene cloning vectors are small (2-5kb). Most of the commonly used plasmids are naturally occurring E. coli plasmid such as ColEl, pBR322 and pUC18.

A plasmid called the fertility or F factor plays a major role in conjugation. The F factor is about 100 kilobases long and bears genes responsible for cell attachment and plasmid transfer between specific bacterial strains during conjugation. Most of the information required for plasmid transfer is located in the tra operon, which contains at least 28 genes.

Many of these direct the formation of sex pili that attach the F+ cell (the donor cell containing an F plasmid) to an F cell. Other gene products aid DNA transfer. The F factor also has several segments called insertion sequences that assist plasmid integration into the host cell chromosome. Thus the F factor is an episome that can exist outside the bacterial chromosome or be integrated into it.

Plasmids often confer antibiotic resistance on the bacteria that contain them. R factors or plasmids typically have genes that code for enzymes capable of destroying or modifying antibiotics. They are not usually integrated into the host chromosome.

Genes coding for resistance to antibiotics such as ampicillin, chloramphenicol, and kanamycin have been found in plasmids. Some R plasmids have only a single resistance gene, whereas others can have as many as eight. Often the resistance genes are within a transposon, and thus it is possible for bacterial strains to rapidly develop multiple resistance plasmids.

Bacteria also harbor plasmids with genes that may give them a competitive advantage in the microbial world. Bacteriocins are bacterial proteins that destroy other bacteria. They usually act only against closely related strains. Bacteriocin often kill cells by forming channels in the plasma membrane, thus increasing its permeability. They also may degrade DNA and RNA or attack peptidoglycan and weaken the cell wall.

Col plasmids contain genes for the synthesis of bacteriocin known as colicins, which are directed against E. coli. Similar plasmids carry genes for bacteriocins against other species. For example, Col plasmids produce cloacins that kill Enterobacter species. Clearly, the host is unaffected by the bacteriocin it produces. Some Col plasmids are conjugative and also can carry resistance genes.

4) Other types of plasmids

Several other important types of plasmids have been discovered. Some plasmids, called virulence plasmids, make their hosts more pathogenic because the bacterium is better able to resist host defense or to produce toxins. For example, enterotoxigenic strains of E. coli cause traveler’s diarrhea because of a plasmid that codes for an enterotoxin.