Pollen culture
•In a common method of pollen culture, anther is collected from sterilized flower buds which contain basal media.
•Anther tissue debris is removed by filtering process the suspension through a nylon sieve having a pore diameter which is slightly under then the diameter of pollen.
•Smaller microspores don’t regenerate thus layer good and viable microscopes can be concentration by filtering the microscope was suspension through a nylon Sievers.
•This pollen suspension is then centrifuged get at low speed 150 ×g for five minutes. 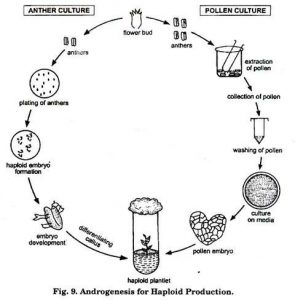 •The microspores are mixed within an appropriate culture medium.
•Approximately density of 103 to 104 microspore 1 ml.
•After that final suspension is then pipetted into small Petri dishes.
•Responsive microspores from embryos or calli and its subsequent development to plant formation can be achieved by transferring to suitable media.
Factors:-
Genotype
•Success in anther culture is predominantly dependent on the genotype of the anther donor material.
• it is also known that anther culture ability is genetically controlled.
Physiological status of the donor plants:-
•In order to allowed in vitro development of pollen into an adult plant, it is very important to start with healthy pollen sales.
•Therefore it is good to culture anthers from plants grown under the best environmental condition.
Stage of pollen:-
•Anthers with microspores ranging from tetrad to the binucleate stage are responsive.
•But as soon as starch deposition has begun in the microscope no sporophytic development and subsequently no microscopic structure formation occurs.
•Data has established that uninucleate microspores are more proof of experimental treatment for culture before or during the first mitosis.
Pretreatment of anthers:-
•The underlying principle of androgenesis is to stop the development of the pollen cell which fate is normally to become a gamete and to force its development directly into a plant.
Cold treatment:-
•In general cold treatment between 3 degree Celsius and 6 degree Celsius for 3 to 15 days give a good response, Maize respond better to a temperature of 4 degree Celsius.
Hot treatment:-
•Floral buds or entire plant in some species when subjected to 30 degree Celsius for 24 hours or 40 degree Celsius for 1 hour stimulates embryogenesis.
Chemical treatment:-
The various chemical is known to induce pathogenesis to chloroethyl phosphoric acid has a pronounced effect in increasing the haploid production in various species.
Culture media:-
•Sucrose is essential for androgenesis.
•Sugar are dispensable in the basal medium as they are not only the sucrose of carbon but are also involved in osmoregulation nitrogen metabolism is quite an important feature.
• It contains nitrate ammonium salt.
•Appears to play a very special role at different stages of the development process.
Deploidization:-
•Haploids can be depolarised to produce homozygous plant by following methods:-
Colchicine treatment:-
•It has been extensively used as a spindle inhibitor.
•The plantlet when still attached to the anther are treated for 24 to 48 hours with 0.5% colchicine solution was thoroughly and replanted.
Endonitrosis:-
•Haploid cells are unstable in culture .
•It has a capacity to undergo endomitosis to form diploid cells.
•This characteristic of cell culture has been exploited in some species for producing homozygous plant or diploidization.
•A small segment of system grown on an auxin, cytokinin medium to induce callus formation.
•There is doubling of chromosome by endomitosis to form deployed homozygous cell and ultimately plant.
Anther culture:-
•The calyx from the flower bud is removed by flammed group the Corolla is slit open and stamens are removed and placed in a sterile Petri dish.
•One of the anther is washed in acetone carmine to test the stage of pollen development.
•In case of cereals spikes are harvested at uninucleate stage of microspore development and surface sterilized.
•Anther can be planted on solid agar media in petri dishes.
•Normally 10 to 20 anthers are plated in a 6 cm petri dish.
•Anthers can be cultured on liquid media and 50 anthers can be cultured in 10 ml of liquid medium.
•In responsive anthers the wall tissues gradually turn brown and within three to eight weeks they breast open due to the pressure extended by the growing pollen callus of pollen plants.
•After they have attained a height of 3-5cm the individual plantlet emerging from the callus are separated and transformed to a medium that would support for their development.
•It is very quick for practical purpose. 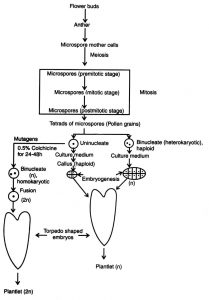