PCR is an in-vitro method for producing large amounts of specific DNA fragments of defined length and sequence from a small amount of complex template, In this technique microgram quantities of DNA from picogram produce amounts of starting material, Target DNA, primers, polymerase and nucleotides are combined in a test tube for multiplication of genetic material.

DNA Template : Any source that contains one or more target DNA molecules to be amplified can be taken as template. RNA can also be used for PCR by first making a DNA copy using the enzyme reverse transcriptase.

Primers: Each PCR requires a pair of oligonucleotide primers, These are short single-stranded DNA molecules obtained by chemical synthesis. These primers are designed to anneal on opposite strands of target sequence so that they will be extended towards each other by addition of nucleotides.

DNA polymerase: The most commonly used enzyme in PCR is Tag DNA polymerase isolated from a thermostable bacterium called Thermus aquaticus. It survives at 95°C for 1 to 2 minutes and has a half life for more than 2 hours at same temperature. The DNA polymerase binds to a single-stranded DNA and synthesizes a new strand complementary to the original strand. The role of this enzyme in PCR is to copy DNA molecules. 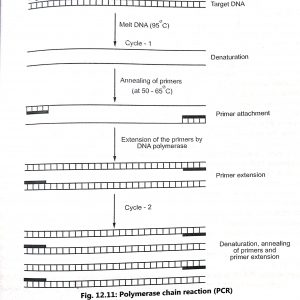 The oligonucleotide primers are designed to hybridise the region of DNA flanking a desired target gene sequence. The primers are then extended across the target sequence using DNA polymerase derived from Thermus aquaticus (Taq) in the presence of free deoxynucleotide triphosphate. These three steps constitute one cycle of the reaction. These steps are repeated by manipulating the temperature, by using the PCR machine, A cycle takes about 3 to 5 minutes and after 30 cycles (about 3 hours), a single copy of DNA can be multiplied into 1,000,000 copies. 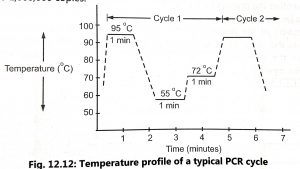 Inverse PCR: PCR can be used to the amplification of those DNA sequences which are away from the primer and not of those which are flanked by the primer. The sequences to be amplified may be cloned in a vector and border sequence of the vector may be used as a primer in such a way that the polymerization proceeds in reverse direction.

Anchored PCR: In this method only one primer is used. One strand is copied first and then poly G tail is attached at the end of the newly synthesized strand. This allows the use of complementary homopolymer, poly-C, to be used as primer for copying the DNA single strands generated by PCR. It gives rise to the complete DNA duplex that can be amplified normally.

Asymmetric PCR: It is used to generate single-strand copies of a DNA sequence which can be directly used for DNA sequencing. The two primers (100 : 1 ratio) are such adjusted in  the reaction mixture that one of them is exhausted about 10 or more cycles. After these cycles only a single strand of DNA segment is copied and these copies are the ideal starting materials for DNA sequencing. This variation is known as asymmetric PCR.

AP-PCR: Arbitrary primed PCR (AP-PCR) is a type of random amplified polymorphic DNA (RAPD) where single primers of 10 to 50 bases are used to amplify genomic DNA in PCR. Welsh and McCleland (1990) developed the arbitrary primed – PCR and carried out finger printing of genomes with arbitrary primers.