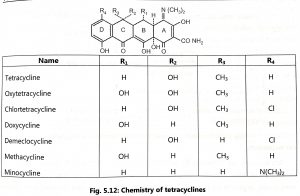 Streptomyces aureofaciens ATCC 13908-13911 and NCI B-9114 are used for industrial production of tetracycline. The stock cultures are maintained for longer periods in the form of lyophilized spores or at liquid nitrogen temperature as spore stock. Tetracycline antibiotic yield can be improved by mutagens like UV light, X-rays, γ-radiation, ethylene amine and nitrogen mustards, alone or in combinations.

The medium used for inoculum development contains carbohydrate (sucrose and maltose)- 2.5%, corn-steep liquor 1.7%, calcium carbonate 1%, (NH4)2SO4 – 0.2% and other inorganic salts and minerals. The composition of inoculation media is made similar to the fermentation media to ensure short lag phase. The different steps in the inoculum development of tetracycline production are shown in Fig. 5.13. The culture is monitored for temperature, pH, residual sugar, carbon dioxide, biomass etc. Optimum yield is obtained from medium containing inoculum for 24 hours. 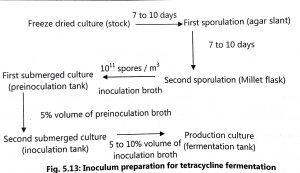 Tetracyclines are obtained by submerged culture technique. A typical medium for production of tetracycline by fermentation contains carbon sources (e.g. sucrose, dextrose. corn starch, vegetable oils), nitrogen sources (e.g. corn-steep liquor, soybean meal, peanut meal) and inorganic salts (M9SO, ZnSO4, NaCl etc). Lactose and saccharose are not used by Streptomyces species. Animal and vegetable oils are used as antifoaming agents as well as carbon sources. Calcium carbonate helps in maintaining pH and also binds with antibiotics. Hence, it prevents from product accumulation and inhibition of product formation. The fermentation is conducted at 28 to 30°C, pH 6 to 6.5 and aeration level of 0.5 to 0.8 volume of air per volume of liquid per minute. The fermentation process may be batch or semi-continuous type. The yield of antibiotic depends upon pH, age of the inoculum and composition of the medium. Aeration of the culture is also very important for the biosynthesis of antibiotic.

Tetracycline is obtained from the filtrate of the acidic medium by adsorption on diatomaceous earth or activated charcoal. It is precipitated in the form of salts with metals of alkaline earth. Extraction is carried from the broth with 1-butanol or in addition of a carrier i.e. quaternary ammonium compounds. Tetracycline forms complex salt with divalent Ca* and Mg*. It is purified by crystallization as salts or bases from boiling solvents like lower alcohols ketones etc.