Riboflavin is an important vitamin required by man and animals. Kuhn, Gyorgy and Wagner Jauregg in 1933 isolated riboflavin from whey of milk. It was first isolated from milk and then prepared by fermentation in 1935. It is also present in other foods as flavoproteins which contain the prosthetic group flavin mononucleotide (FMN) or flavin adenine dinucleotide (FAD). Chemically, riboflavin is an alloxazine derivative which consists of a pteridine ring condensed to a benzene ring. The side chain consists of a C5-polyhydroxyl group (Fig. 5.14). Riboflavin is prepared by a fermentation process as well as by a synthetic method. It is produced by a number of microorganisms including bacteria (Clostridium butyricum, Clostridium acetobutyticum, Clostridium felsineum, Mycobacterium smegmatis, Aerobacter aerogenes), yeast (Candida arborea, Candida flareri, Saccharomyces species) and yeast like fungi, ascomycetes (Ereomothecium ashbyi, Ashbya gossypii).

The hyphae of Ashbya gossypii can produce large amount of riboflavin. Carbon sources (glucose, sucrose, maltose), Nitrogen sources (peptone, corn-steep liquor) and other nutrients are used to produce maximum yield of riboflavin. Production medium is prepared according to the type of microorganisms to be used for the fermentation process. Inoculum is prepared from slants or spores of particular cultures. After one or two flask stages, further inoculum is prepared through one or two small fermentation tanks.

Glucose, corn steep liquor, soybean and glycine are most suitable for production of vitamin B2, from Ashbya gossypii. Flow diagram for production of riboflavin is shown in Fig.5.15. A laboratory culture of Ashbya gossypii is inoculated into a sterilized medium containing the required ingredients. The fermentation is carried out at 28°C temperature and at pH 6.8 for 4 to 5 days under aerobic conditions. The excess aeration is not suitable for growth of cells because it inhibits mycelia production and reduces the yield. 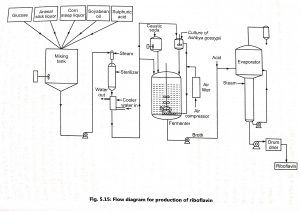 An aeration rate at 0.25 to 0.30 volumes of air per volume of medium per minute is satisfactory for maximum yield. The fermentation progresses through four phases.

(a) First phase: It is the initial rapid growth phase of Ashbya gossypli. In this phase, glucose is utilized and decreases the pH due to accumulation of pyruvic acid.

(b) Second phase: In the phase, sporulation occurs and this phase is called as production phase. Ammonia in the medium accumulates (deaminase activity) and increases the pH.

(c) Third phase: The third phase is characterized by the synthesis of cell bound riboflavin in the form of flavin adenine dinucleotide (FAD) and flavin mononucleotide (FMN). This phase is accompanied by rapid increase in catalase activity and subsequently cytochromes disappear.

(d) Fourth phase: The free riboflavin is released into the medium due to autolysis of the cells.

The riboflavin is present in solution as well as bound form to the mycelium. Acetone, petroleum, ether and butanol are used for extraction of riboflavin from fermentation broth, It is precipitated by using reducing agents as hydro sulphite and finely divided diatomaceous earth.