With the development of technology in biochemistry, the chemical composition of chromosomes has been carried out which revealed that major components of chromosomes are DNA (Deoxyribose Nucleic Acid), RNA (Ribo Nucleic Acid), histones (basic proteins of low molecular weights), and acidic proteins (non-histone proteins). Calcium has also been found associated with addition to these constituents but the exact way in which the nucleoprotein complex is assembled is still not very clear. It is thought by the cytologists that RNA is localized at certain regions of the chromosome but proteins are associated with DNA molecules along its entire length. RNA seems to be associated with DNA because some part or the other of chromatin is always being transcribed. Therefore, RNA is the transcription product of chromatin and probably not it’s an integral part. 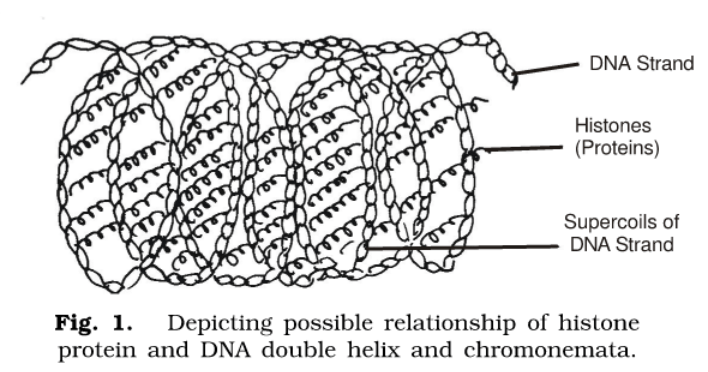 According to Ambrose & Easty (1970), the electrical properties of nucleoproteins mainly determine the stability of chromosomes. Histones partly neutralize the negatively charged phosphate groups of DNA. Further neutralization is brought about by calcium bridges formed by the Ca++ ion between phosphate groups. On the basis of Ambrose & Gopal Ayenger’s (1952) observations, it has also been reported that any factor which reduces the negative charges on nucleoprotein will tend to lead to the formation of a more compact structure and conversely any factor, which increases the negative charges will cause repulsive forces to operate, thus expanding the chromosomes.

The relative proportion of components suggests that, generally, there occurs more protein than DNA in chromosomes. The relative amount of different constituents of the chromosome is given as follows:

DNA is the most important chemical component of chromatin since it plays a central role in controlling heredity. The most convenient of DNA is a picogram (10-12). DNA of chromatin represents the following two phenomena:

The C-value. The DNA in nuclei was stained using the feulgen reaction and the amount of stain in single nuclei was measured using a special microscope called a cytophotometer. Both of these techniques demonstrated that nuclei contain a constant amount of DNA. Thus, all the cells in an organism contain the same DNA content (2C) provided that they are diploid. Gametes are haploid and, therefore, have half the DNA content (1C). Some tissues such as the liver, contain occasional cells that are polyploid and their nuclei have a correspondingly higher DNA content (4C or 8C).

Thus, each species has a characteristic content of DNA, which is constant in all individuals of that species. This is called the C-value.

The C-value Paradox. Eukaryotes vary greatly in DNA content but always contain much more DNA than prokaryotes. Lower eukaryotes, in general, have less DNA, such as nematode Caenorhabditis elegans which has only 20 times more DNA than E. coli, or the fruit fly (D. melanogaster) which has 40 times more DNA (ie., 0.18 pg or picogram per haploid genome). Vertebrates have greater DNA content (about 3 pg), in general about 700 times more than E. coli. One of the highest DNA content is that of the Salamander amphivma which has 84 pg of DNA. Man has about 3 pg of DNA genome, or 3 x 109 base pairs, ie., the human genome could accommodate about 3 million average-sized proteins if all the DNA were coding (or containing structural genes) and if this was true, salamanders would have 30 times more genes than human beings. This is called the C-value paradox (Gall, 1981). It was detected quite early that there was little connection between the morphological complexity of eukaryotic organisms and their DNA content.

For example, E. coli (containing 3,400,000 base pairs in its DNA) has about 3000 genes. Although it is difficult to estimate how many different genes exist in the human genome, there are probably not more than 20000 to 30000 genes. There is no reason to believe that salamanders should have more.

Histones are very basic proteins, basic because they are enriched in the amino acids—arginine and lysine, to a level of about 24 moles per cent. Arginine and lysine at physiological pH are cationic and can interact electrostatically with anionic nucleic acids. Thus, being basic, histones bind tightly to DNA which is an acid. There are five types of histones in the eukaryotic chromosomes, namely H1, H2A, H2B, H3, and H4.

One of the important discoveries that have come from chemical studies is that the primary structures of histones have been highly conserved during evolutionary history. For example, histone H4 of the calf and of garden pea contains only two amino acid differences in a protein of 102 residues (DeLange, 1969). Likewise, the sequence of histone H3 from rats differs only in two amino acids from that of a pea, out of 102 total amino acid residues.

These organisms are estimated to have an evolutionary history of at least 600 million years, during which they diverged structurally. This conservation of structure suggests that over the eras, histones have a very similar and crucial role in maintaining the structural and functional integrity of chromatin. Such evolutionary conservation suggests that the functions of these two histones involve nearly all of their amino acids so that a change in any position is deleterious to the cell.

Histone H1 is the least rigidly conserved histone protein. It contains 210 to 220 amino acids and may be represented by a variety of forms even within a single tissue. H1 is present only once per 200 base pairs of DNA (in contrast to the rest of the four types of histones, each of which is present twice) and is rather loosely associated with DNA. H1 histone is absent in yeast, Saccharomyces cerevisiae. Histones besides determining the structures of chromatin play a regulatory role in the repression activity of genes.

In contrast to the modest population of histones in chromatin, non-histone proteins display more diversity. In various organisms, the number of non-histones can vary from 12 to 20. The heterogeneity of these proteins is not conserved in evolution as the histones. These non-histones differ even between different tissues of the same organism suggesting that they regulate the activity of specific genes.

About 50 percent of non-histones of chromatin have been found to be structural proteins. They include such proteins as actin « and B-tubulins and myosin. Although for some time these contractile proteins were thought to be contaminants, it is now believed that they are vital ingredients for the chromosome condensation and in the movement of chromosomes during mitosis and meiosis (Thorpe, 1984). Many of the remaining 50 percent of non-histones include all the enzymes and factors that are involved in DNA replication, transcription, and regulation of transcription. These proteins are not very highly conserved among organisms, although they must carry out similar enzymatic activities. Apparently, they are not as important as the histones in maintaining chromosome integrity.

Several methods have been developed over the years to prepare chromatin for microscopical examination. A relatively simple approval is to first prepare purified nuclei from the thymus. Liver or any other desired source nuclei are then lysed with detergent and the chromatin is pelleted at 20000 rpm (about 50000 g) in a preparative centrifuge. Chromatin can also be isolated biochemically by purifying nuclei and then lysing them in a hypotonic solution. When prepared in this way chromatin appears as a viscous gelatinous substance. Thus, chromatin which has been isolated from the rat liver contains DNA, RNA, and protein. Rat liver chromatin has been used as a model for chromatin. It possesses a histone to DNA ratio near 1: 1, a non-histone protein to DNA ratio of 0.6: 1, and an RNA/DNA ratio of 0.1: 1.