The root is a downward growth of the plant into the soil. It is positively geotropic and hydrotropic. Radicle from the germinating seed grows further into the soil to form the root. It produces similar organs. Root does not have nodes or internodes. Branching of the root arises from the pericyclic tissues. Roots are covered by root caps or root heads.

(i) Functions of Roots:

1. Roots fix the plant to the soil and give mechanical support to the plant body.

2. Roots absorb water and the minerals dissolved in it from the soil and transport them to the aerial parts where they are needed.

(ii) Various parts of a root:

(a) Root-cap: The tip of the root is very delicate and is covered by root cap. Root cap protects the growing cells and when it is worn out it is replaced by the underlying tissues immediately.

(c) Region of elongation: The newly formed cells in the growing region grow further by elongation in this region resulting in the increase in the length of the root. 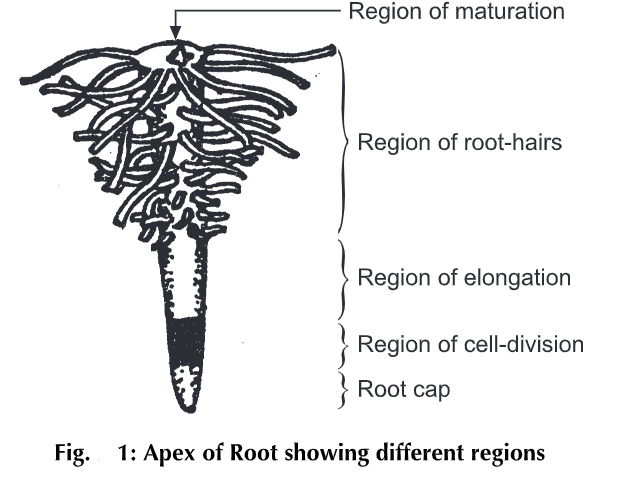 (e) Region of maturation: It is located above the region of root hairs. It does not absorb anything but is mainly responsible for the absorbed material by roots. The root-branches or the lateral roots are produced in this region.

Root-caps as well as root-hairs are absent in case of aquatic roots. There are certain plants in which roots are absent and are described as rootless plants, such as Utriculara salvinia etc.

There are two types of root-systems.

(a) Tap-root system or primary roots.

(a) Tap root system: The radicle grows into the soil and forms main axis of the root known as tap root. It grows further to produce branches in the acropetal manner known as secondary roots which further branches to give tertiary roots. These are all true roots. This system is characteristic of dicotyledons. 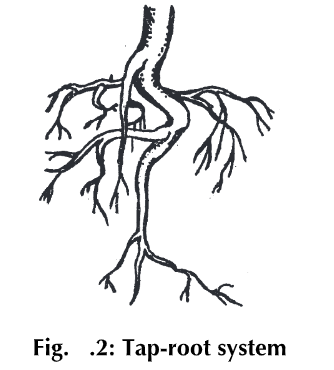 As stated earlier, under unfavourable circumstances for growth or in special cases roots undergo modification for various purposes. Modification of roots are as under:

I. Modification for storage of food:

This type of modification is shown by both the types of roots i.e. tap roots and adventitious roots. These store carbohydrates and are used during early growth of successive season.

(i) Tap-roots show the following three types of modifications: 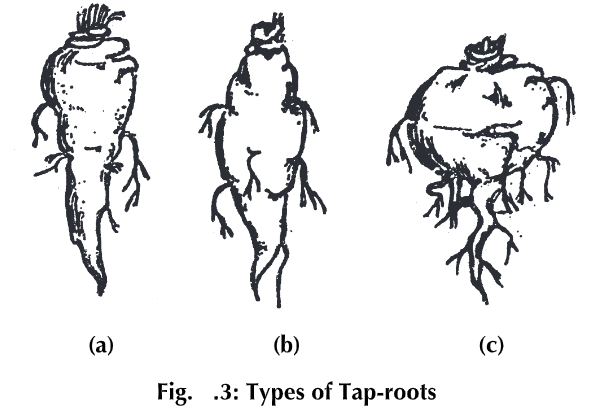 (B) Fusiform root of radish.

(a) Conical: These are cone-like, broader at the base and tape-ring at the tip. example: carrot.

(b) Fusiform: These roots are more or less spindle-shaped i.e. tapering at both the ends e.g. Raddish.

(c) Napiform: These are spherical shaped and very sharply tapering at lower part such as beat and turnip.

They store carbohydrates but do not assume any special shape.

(a) Tuberous roots: These get swollen and form single or isolated tuberous roots which are fusiform in shape. These also serve the purpose of propagation such as Four o’clock, sweet potato, jalap aconite. 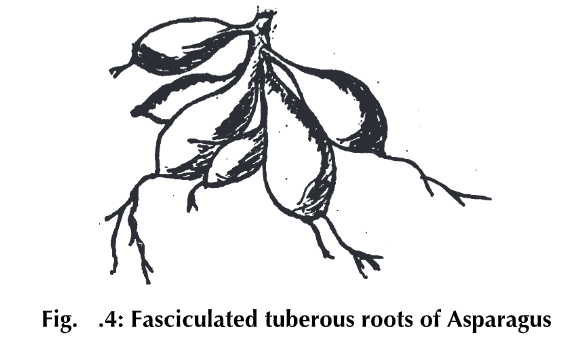 (c) Palmated tuberous roots: When they are exhibited like palm with fingers as in common ground orchid.

(d) Annulated roots: The swollen portion is in the form of a series of rings called annules as in Ipecacuanha.

(a) Clinging or Climbing roots: These types of roots are developed by plants like pothos Betel vine, Black-pepper for support or for climbing purposes at nodes.

(b) Stilt roots: This type of root is observed in maize and screw-pine which grow vertically or obliquely downwards and penetrate into soil and give additional support to the main plant.

(c) Columnar roots: In certain plants like banyan the additional support is given by specially developed pillars or columnar roots. They even perform the function of regular roots.

1. Respiratory roots or pneumatophores: The roots of the plant growing in marshy places on seashores due to continuous waterlogging are unable to respire properly. They develop some roots growing against the gravitational force (in the air) with minute openings called lenticels. With the help of lenticels, they carry on the exchange of gases. They look like conical spikes around the stems. This type of root is observed in the case of plants called mangroves found in creeks i.e. Avicennia. 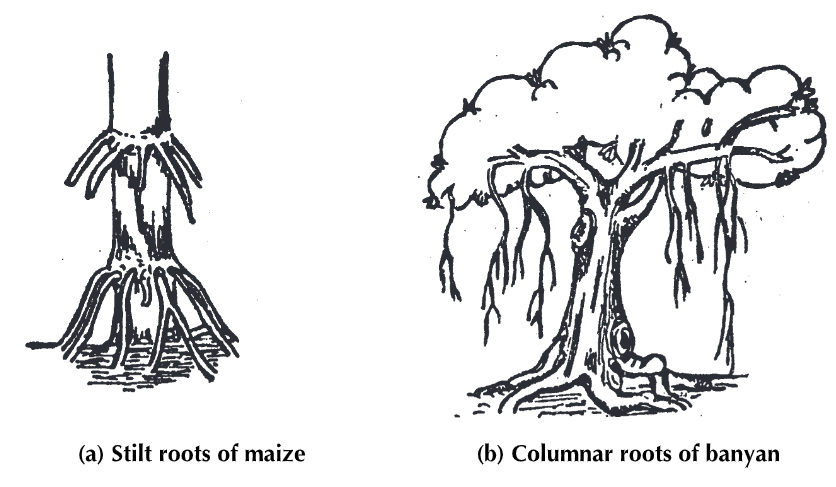 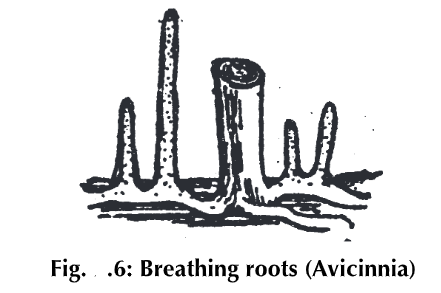 2. Sucking roots or Haustoria: The plants which are total parasites on the host, develop special type of roots for the purpose of absorption of food material from the host. These roots neither possess root-caps nor root-hairs and are known as sucking roots, cuscuta, striga and viscum are examples of this type of roots. 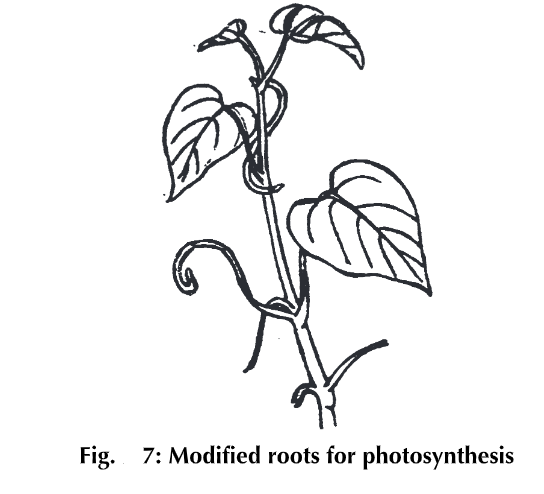 4. Epiphytic or Assimilatory roots: The plants which grow on the branches or stems of the plants without taking any food from them are called epiphytic and the roots developed by them are the epiphytic roots. They consist of the following:

(b) Aerial roots which hang freely in the air, which are normally long greenish white in colour and absorb moisture from the atmosphere with the help of porous tissue. These roots are devoid of root-caps and root-hairs. They carry on photosynthesis. These are developed in the plants growing in humid atmosphere. Bulbophyllum, vanda are the examples of this type.

5. Nodulated roots or root tubercles: The plants belonging to leguminosae family develop nodules or tubercles. These are formed by nitrogen-fixing bacteria and getting carbohydrates from the plants. Roots and bacteria are symbiotic to each other. These swellings developed by roots are nodulated roots.

1. Source of food and vegetables: Most vegetables constitute roots only i.e. radish, turnip, beet, carrot etc. They are rich sources of vitamins or precursors. Some of them like sweet- potato and tapioca are rich in starch and hence consumed as food.

2. Various types of drugs are obtained from roots. Following is the list of plants providing medicinal roots along with their contents and uses. 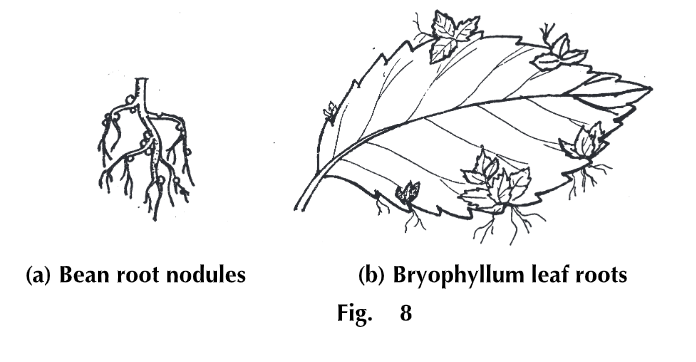