Soil is a stratified mixture of inorganic and organic materials, both of which are decay products. The mineral constituents of the soil are derived from some parent material, the soil forming rocks by fragmentation or weathering, while the organic components of the soil are formed either by the decomposition (or transformation) of dead remains of plants or animals or by the metabolic activities of living organisms present in the soil. Before discussing the soil-forming processes, let us briefly describe the nature of the rock-forming soil as follows: 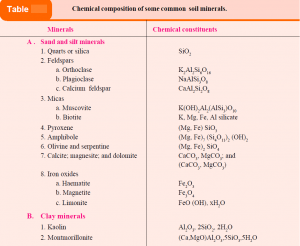 The processes which are involved in the formation of mature soil can be studied under the following heads:

The formation of soil begins with the disintegration or weathering of parent rocks by certain physical , chemical and/or biological agents, which cause the soil-forming rocks to be broken down into small particles called regoliths. Regoliths are the basic materials which, under the influence of various other pedogenic processes, finally develop into mature soils.

(a) Physical weathering: Physical weathering agents are primarily climatic in nature , having a mechanical effect on the substrate, resulting in the pulverisation of fragments into progressively decreasing particle sizes (i.e. regoliths). Such weathering of rocks does not cause any chemical transformation of rock-minerals and is common in deserts, high altitudes, high latitudes, and locations with marked topographical relief and sparse vegetation cover. The agents involved in the weathering of rocks are temperature, water, ice, gravity and wind.

The temperature causes the disintegrating of those rocks which have a heterogeneous structure due to the fact of differential expansion and the coefficient of contraction of the materials which make up the rocks. Minerals that make up the rocks have different degrees of expansion. These minerals expand at high day temperatures and contract when the temperature drops. The differential expansion and contraction of the different rock minerals creates internal tensions and produces cracks in the rocks and, as a result, the weather of the rocks into finer particles.

In its liquid state water causes mechanical weathering of rocks by following methods :

(i) Rain water. Natural water falling either in the form of rain drops or hail storm on the surface of rock with beating effect bring about abrasion of massive rocks into smaller particles.

(ii) Torrent water. Rapidly flowing water rolls the heavy rock masses such as rock boulders along the bottom of stream and grinds them into finer particles.

(iii) Wave action. The wave actions are most effective in sea shores. The rapidly striking water waves dislocate solid particles of varying diameters from sea shore rocks and the debris is then settled at the sea bottom to form marine soil.

Water is also a mechanical carrier. Almost 5 billion tonnes of mineral matter are transported annually in solution from land to sea . In its freezing and ice-melting states, water causes frost and glacier formation to weather the rock. Water in the form of frost or ice is an extremely effective physical weathering agent for rocks. It sinks into rock crevices, freezes due to a sudden drop in rock temperature, expands about nine per cent of its original volume, exerts a pressure (expanding force) of approximately 150 tonne / ft2 and eventually cracks the rock into smaller pieces. Likewise, in summer, when ice begins to melt at the mountain tops and glaciers (huge ice sliding masses) move downwards on the slope, then, during glacier movements, the rock over which they move is gradually worn down to produce fine particles deposited as drift or till when the glacier finally retreats.

Gravitation weathering action is most effectively demonstrated by land slides and rock slides caused by earth quakes and faults during which the rock is fragmented by abrasion and impact forces. Finally, the rapid stormy wind carrying suspended sand particles causes the abrasion of exposed rock. It acts as a mechanical carrier when moving particles over the surface of the earth as dunes or drifts and when transporting large quantities of fine suspended particles over long distances.

(c) Biological weathering: Although the surface of bare rock is unsuitable for many forms of life, a number of microorganisms ( bacteria, protozoa, fungi, nematodes, etc.) may have a foothold in lichens and mosses. These early colonisers transformed the rock into a dynamic system, storing energy and synthesising organic material . Their activities alter both the mineral composition and the physical structure of the rock. For example, lichens are present in the early stages of biological succession, and their growth may cause cracking or flaking, which may lead to further weathering of a larger area of rock. Mosses and lichens extract mineral nutrients such as P, S, Ca , Mg, K , Na, Fe, Si, and Al from the rock. These elements are combined with organic complexes and eventually return to the developing soil when the vegetation is decomposed.

Products of Weathering and Soil Types

The soil formed by the weathering of soil-forming rocks is called embryonic or primary soil. Secondary or transported soils are those which are transported to other places by carriers such as gravity, water, glacier and wind. Soil material transported from one area to another is known as loess or eolian; transported by water as alluvial, lacustrine (lake soil) and marine deposits; transported by gravity as colluvial soil and transported by sand storms as sand dunes. In a few places, soil material comes from accumulated organic matter such as peat. Residual or sedentary soil is the soil that develops in situ above the parent bedrock.