The Menstrual Cycle In Women

The Menstrual Cycle In Women

After puberty in women, the menstrual (monthly) cycle is established. The production of eggs (oocytes) is cyclical: it involves an interplay of hormones and changes in the follicle cells of the ovary and lining of the uterus. The controller is the hypothalamus. The hypothalamus secretes GnRH which acts on the anterior pituitary: this releases the gonadotropins LH and FSH. These act on the ovaries, stimulating them to make sex steroids, principally progesterone and estrogens. In low concentrations, estrogens act to increase the sensitivity of the pituitary to GnRH, resulting in increased gonadotropin synthesis; progesterone inhibits GnRH and gonadotropin production.

The menstrual cycle begins on the first day of menstrual flow (menorrhoea) caused by the shedding of the endometrium lining the uterus.

A rise in estrogens in mid-cycle due to dramatic growth of the follicles triggers a sharp increase in pituitary LH (positive feedback), stimulating release of the egg (ovulation). FSH levels also rise, but less dramatically because they are regulated by another follicular hormone, inhibin. 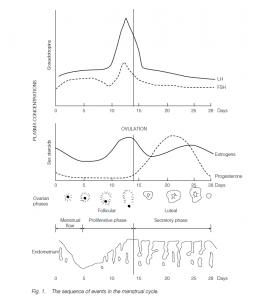 Under the continued influence of LH, cells from the emptied follicle enlarge and fill the cavity, producing the corpus luteum which secretes estrogens and progesterone. Progesterone further stimulates endometrial growth and transforms it into a secretory tissue, preparing it for implantation of the conceptus.

In the absence of fertilization of the egg, the corpus luteum degenerates, production of sex steroids falls, the endometrium is shed and the cycle ends and recommences.

During early and mid-adulthood, the woman’s menstrual cycle continues with a periodicity of about 28 days.