Transgenesis is a new technology for altering the characteristics of animals by directly changing the genetic material. It has been gaining application among biotechnologists since the development of transgenic ‘super mice’ in 1982 and the development of the first mice to produce a human drug (tissue plasminogen activator) in 1987. Transgenic sheeps and goats are being used to produce recombinant proteins secreted in milk. In pharmaceutical development, transgenic animals and plants may be used as ‘bioreactors’ for chemical production. The transgene is introduced into a fertilized ovum or cells of an early stage embryo by microinjection, manipulation of embryonic stem cells or using retroviral vectors.

The first step in developing a transgenic organism is to identify, prepare and purify the DNA coding of the particular trait desired. The transgene contains not only the gene of interest, but a promoter sequence which controls the gene’s function. The purity of the DNA construct is important in order to avoid toxic effect on the embryo. Transgenes can be introduced into animals by three methods. Each involves gene transfer into a fertilized ovum or into cells of an early stage embryo. Modified embryos are them implanted into the uterus of a host animal where they develop into genetically modified offspring.

The microinjection method was first documented in 1966. This is most commonly used method to produce genetically modified animals. In this method, eggs are harvested from super ovulated animals and fertilized in-vitro. A microtube is used to hold the fertilized egg and an extremely fine needle used to inject DNA directly into the nucleus (Fig. 19.10). The embryo is then implanted in the uterus of a surrogate mother. After birth, the animals are tested to determine if they have the transgene and corresponding desired traits. This method is commonly used to produce transgenic fish, insects, birds and mammals.

Retroviruses can be used to infect cell of an early stage embryo prior to implantation. Viruses are effective vectors for DNA, however, transgene size is limited to 8 to 10 kilobases. The offspring are chimeric and transmission only occurs if the retrovirus integrates into some of the germ cells. Embryos that carry the transgene can be frozen and stored for implantation.

Embryonic stem (ES) cells are pluripotent cells isolated from inner cells mass of early embryos. Embryonic stem cells can be genetically modified in the laboratory and incorporated into blastocysts for implantation. Embryonic transfer is then conducted resulting in the production of a chimeric animal (Fig. 19.11). In production of chimeric mouse, the ES cells of black mouse intermingle with that of albino. The microinjected embryo is transplanted into the uterus of a surrogate mother. The progeny born has black and white skin colour. Such mouse was called chimera or chimeric mouse. Transgenic mice that carry a knockout gene is called knockout mice. Now it is possible to select and knockout (remove) a gene and make genetic modifications in the embryonic cells and mouse. These animals are particularly useful in the study of genetic control of the developmental process.

Recently it has become possible to extend the nuclear transplantation procedure, originally carried out in amphibians to mammals. The first mammal to be cloned in this way was ‘Dolly’. Ian Wilmut and his colleagues at Roslin Institute, Edinburgh, Scotland developed first mammalian clone ‘Dolly’ in 1996. ‘Dolly’ is the first transgenic lamb to be produced by nuclear transfer. She was produced from foetal fibroblast cells that were modified by the addition of the human gene coding for blood clotting factor IX together with a marker gene .Nuclear transfer has been used successfully in cloning several mammalian species including sheep, mice, cattle, cats and monkeys. 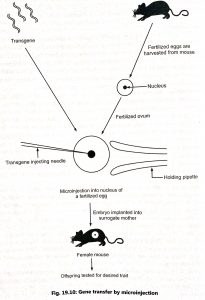