It is a microscope that uses a beam of accelerated electrons as a source of illumination. As the wavelength of an electron can be 100,000 times shorter than that of visible light photons, electron microscopes have a higher resolving power than light microscopes and can reveal the structure of smaller objects like viruses. Ernst Ruska developed the first electron microscope, a TEM, with the assistance of Max Knolls in 1931. In 1934 Ruska developed an electron microscope that could magnify objects up to 12,000 times. Both light and electron microscopes have the same purpose of producing a magnified image of the object. In a TEM, electrons replace visible light, electromagnetic coils replace glass lenses, and images are viewed on a screen rather than through an eyepiece. The electron beam is accelerated by an anode with respect to the cathode, focused by electrostatic and electromagnetic lenses, and transmitted through the specimen that is in part transparent to electrons and in part scatters them out of the beam. When it emerges from the specimen, the electron beam carries information about the structure of the specimen that is magnified by the objective lens system of the microscope.

You May Read: Scanning electron microscope

A Transmission Electron Microscope produces a high-resolution, black and white image from the interaction that takes place between prepared samples and energetic electrons in the vacuum chamber. Image formation occurs by electron scattering. Electrons strike the atomic nuclei and get dispersed and form the image. The electron image is converted to a visible form by projecting it on the fluorescent screen.

It is a simple method of studying the morphology and structure of viruses, cell components like ribosomes, cell membrane as well as macromolecules like proteins. The shapes can be determined at the molecular level. The specimen is embedded in a negative stain- a metal in its salt form (potassium phosphotungstate). After drying the electron-dense metal ions surround the specimen. The difference between the specimen and the surrounding heavy metal ions with respect to density produces the contrast. The bright specimen is observed in the dark background of dried stain. The electrons pass through the specimen but not through metallic background. There is no reaction between the stain and the specimen. It is accomplished by using the stain at a pH at which there is no or negligible attraction between the specimen and the stain

This technique is used to increase the contrast. The specimen is dried on a special grid and placed in a vacuum jar. A heavy metal like chromium, palladium, platinum, or uranium is evaporated at an angle from a filament of glowing tungsten. As it gets deposited at an angle, it piles up on the side from which is deposited while the other side remains clear of it. Under TEM the sides with deposition show dark areas while the other side shows bright shadows. We can get information about the shape of viruses and bacteriophages. It can determine the height of the object. It can give a three-dimensional picture that can’t be obtained by other methods. 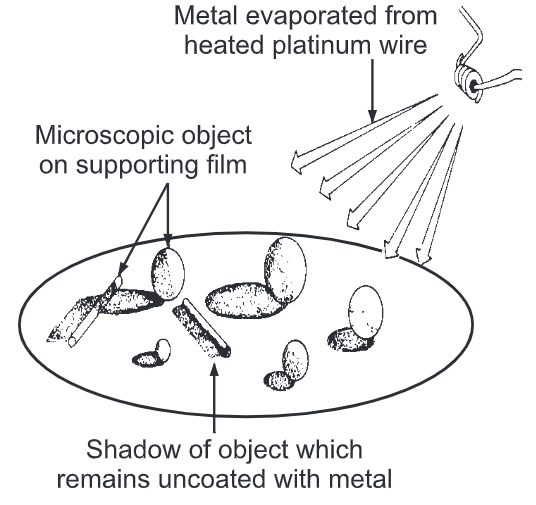