Transport From Golgi apparatus to Lysosomes

Transport From GA to Lysosomes

Proteins, lipids and polysaccharides are transported from the Golgi apparatus to their final destinations through the secretory pathway. Proteins are sorted into different kinds of transport vesicles, which bud from the trans Golgi network and deliver their contents to the appropriate cellular locations. Some proteins are carried from the Golgi apparatus to the plasma membrane by a constitutive secretory pathway and some proteins are transported to the cell surface by a distinct pathway of regulated secretion or are specifically targeted to other intracellular destinations, such as lysosomes in animal cells or vacuoles in yeast.

Proteins are sorted into the regulated secretory pathway in the trans Golgi network, where they are packaged into specialized secretory vesicles. These immature secretory vesicles are larger than the transport vesicles, often fuses with each other while further processing their protein contents. The sorting of proteins into the regulated secretory pathway appears to involve the recognition of signal patches shared by multiple proteins that enter this pathway. The cisternal maturation model proposed for transport of proteins through the Golgi apparatus deals with the fact that the cisternae of the Golgi apparatus move by being built at the cis face and destroyed at the trans face. Vesicles from the endoplasmic reticulum fuse with each other to form a cisterna at the cis face, consequently this cisterna would appear to move through the Golgi stack when a new cisterna is formed at the cis face. This model is supported by the fact that structures larger than the transport vesicles, such as collagen rods, were observed microscopically to progress through the Golgi apparatus.

The vesicular transport model views the Golgi as a very stable organelle, divided into compartments in the cis to trans direction. Membrane bound carriers transport material between the endoplasmic reticulum and the different compartments of the Golgi. Experimental evidence includes the abundance of small vesicles also known as shuttle vesicles in proximity to the Golgi apparatus. To direct the vesicles, actin filaments connect packaging proteins to the membrane to ensure that they fuse with the correct compartment. The cisternal maturation model and the vesicular transport model may actually work in conjuction with each other and sometimes referred to as the combined model.

The vesicles that leave the rough endoplasmic reticulum are transported to the cis face of the Golgi apparatus, where they fuse with the Golgi membrane and empty their contents into the lumen. Once inside the lumen, the molecules are modified, then sorted for transport to their next destinations. The Golgi apparatus tends to be larger and more numerous in cells that synthesise and secrete large amounts of substances; for example, the plasma B cells and the antibody secreting cells of the immune system have prominent Golgi complexes. Those proteins destined for areas of the cell other than either the endoplasmic reticulum or Golgi apparatus are moved towards the trans face, to a complex network of membranes and associated vesicles known as the trans- Golgi network (TGN). This area of the Golgi is the point at which proteins are sorted and shipped to their intended destinations by their placement into one of at least three different types of vesicles, depending upon the molecular marker they carry. 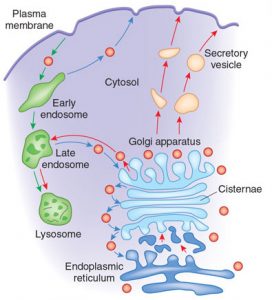