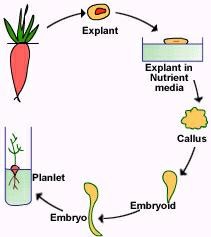 A meristem is a group of undifferentiated plant cells that can undergo division to form all types of tissues.