The adenohypophysis secretes six main hormones. They are all proteins; two of them, Growth Hormone and Prolactin, act directly on target organs whereas the others act as ‘trophins’, that is, they promote the activity of other endocrine glands.

This is a protein of mol. wt. approximately 49,000. In its action, it parallels the anabolic steroids with regard to protein metabolism in tissues. It also parallels the action of thyroxin. Overactivity of the adenohypophysis can produce growth abnormalities. In man, overactivity at a pre-pubertal stage can give rise to gigantism; increased height, frequently 7 to 8 feet, accompanied by hypertrophy of internal organs and skeletal muscles. Post pubertal hyperactivity leads to the growth of bones in the hands and feet, the facial bones, and the jaw, a condition which is termed acromegaly in man. 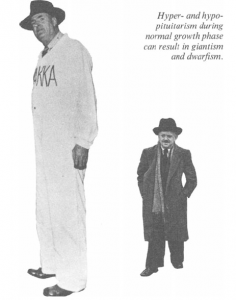 This hormone is present in the pituitaries of all vertebrates examined and in approximately equal quantities in the male and female. It promotes the secretion of milk from the mammary glands in the mammal providing they have been activated previously by ovarian hormones.

The thyrotrophic hormone promotes the secretion of thyroglobulin from the thyroid gland, thus is an indirect regulator of metabolic rates in all vertebrates and of metamorphosis in amphibia.  It helps in the production and the release of T3 and T4

These are proteins of mol. wt. approximately 65,000. Interstitial cell-stimulating hormone (I.C.S.H.), which promotes spermatogenesis in the male mammal, and Follicle Stimulating Hormone (F.S.H.), which promotes the maturation of ova in the ovaries, are probably the same gametogenic hormone. A second gonadotrophic hormone, Luteinising Hormone (L.H.) acts in the female in conjunction with F.S.H. to induce ovulation and thereafter promotes the development and hormonal activity of the corpus luteum. 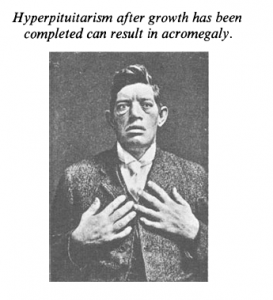 This topic, which is central to the whole concept of an integrated pattern of hormonal coordination and response, is the subject of some speculation. The activity of the adenohypophysis may be subject to two control modes: 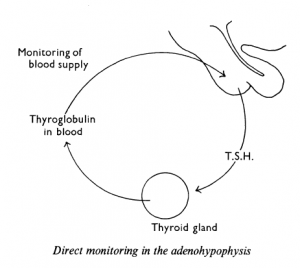 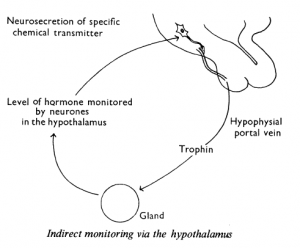