The common amphibians are the frogs, toads, and salamanders. They spend part or all of their existence in the water or damp places. Most lay their eggs in the water; and the larvae, which breath with gills, are known as tadpoles or pollywogs. Some amphibians are often confused with reptiles, especially the lizards, because of their similarity form, but almost all reptiles possess scales and are not slimy, whereas amphibians usually have a smooth slimy skin without scales except in a few rare species.

There are 10 orders of extinct Amphibia and three orders of living fo~ which are as follows:

The United States is a paradise for the student of Amphibia because it contains large numbers of species and individuals. Since all amphibians require moisture, they should be looked for in or near bodies of freshwater and in moist places such as under logs and stones in damp woods. Among the most interesting features of amphibians are their ability to change colour, their powers of regeneration, their varied and often curious breeding habits, their methods of spending the winter, and their poisonous secretions. 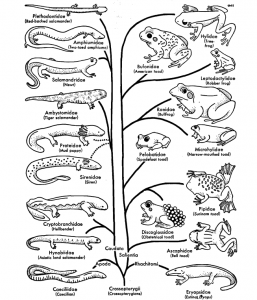 Some orders and families of amphibians. Probable relationships of the more important living families are indicated by lines

The colours in the skin of amphibians are due· to scattered pigment granules in the epidermis and to pigment cells in the dermis. The latter are usually brown, black, yellow, or red and are contained in cells called chromatophores. The power of changing colour is possessed by most amphibians, and especially by frogs. The common leopard frogs are supplied with black pigment cells called melanophores and with interference cells that contain whitish crystals, golden pigment cells, and sometimes red pigment cells. The black melanophores are branching cells. When the pigment is dispersed, it covers a larger area and consequently gives the skin a darker colour. When the pigment is concentrated the skin becomes lighter. These changes in the colour of the skin. The yellow pigment is contained in spherical golden cells. There is no green pigment; the green colour results from a combined effect of light reflected from the granules of the interference cells and the yellow pigment through which the light passes. Most of the colour changes are due to changes in the concentration of the black and yellow pigments.

Colour changes are brought about primarily by a hormone called intermedin,  which is secreted by the intermediate lobe of the pituitary gland. Intermedin causes dispersion of pigment granules. Light is the chief stimulus; it acts through the eye. Experimentally blinded frogs show a reduced capacity to change colour. In bright light, the skin of the frog becomes light in colour, whereas in the dark it changes to a darker hue.

Stages in the changes of pigment· bearing cells (melanophores) in the skin of the frog. The color variation from the fully expanded to the completely contracted melanophores black to gray.

Changes in colour are due to both external and internal conditions; temperature is important. external factor. When the temperature is raised, the pigment becomes more concentrated, and the skin changes to a lighter colour. When the temperature is lowered, the pigment becomes expanded and darker colour results. It is evident that changes in the skin colour of the frog are in part due to a hormone (intermedin) and in part to the nervous system. Usually, the colour changes are such as to come to the frog to resemble more closely its surroundings; thus it becomes less conspicuous and is protectively coloured.

The power of regenerating lost parts is remarkably well developed in many Amphibia. For example, the foot of a two-year-old axolotl was cut off, and in 12 weeks a complete foot was regenerated in its place. The newt has been observed to regenerate both limbs and tail. The tailless amphibians are unable to regenerate lost parts to any considerable extent, except in the early stages. As a general rule, the younger tadpoles regenerate limbs or a tail more readily than older specimens. There is a distinct advantage in this possession of the power of regeneration since amphibians often escape from their enemies with mutilated limbs or tails, but they are not permanently inconvenienced by the loss since new parts rapidly grow out.

Most Amphibia are oviparous; and their eggs, as in the leopard frog, are fertilized by the male after extrusion. In some of the tailed forms, however, the eggs are fertilized before they are laid. A few species bring forth their young alive; for example, the alpine salamander, Saiamandra.  Several curious breeding habits are exhibited by certain species. The male obstetrical toad carries the egg strings with him, wound about his hindlimbs; and when the tadpoles are ready to emerge, he takes to the water and allows them to escape. The eggs of the Surinam toad is placed on the back of the female during copulation, are held there by a sticky secretion, and are gradually enveloped by the skin. Within these epidermal pouches, the eggs develop and the tadpole stage is passed; then the young toads escape as air-breathing aquatic animals. The American bell toad found in California is unique in that fertilization is internal. The male grasps the female around the pelvis, and by use of an external taillike copulatory organ, the sperms are deposited in the cloaca of the female. The brooding or marsupial tree frogs of Venezuela, Gastrotheca, have a pouch with an opening in the posterior part of the trunk in which the eggs are placed and the young are reared. The female of another species of tree frog carries her eggs in a depression on her back until they are almost ready for metamorphosis.

Many amphibians bury themselves in the mud at the bottom of ponds in the autumn and remain there in a dormant condition until the following spring. During this period of hibernation, the vital processes are reduced; no air is taken into the lungs since all necessary respiration occurs through the skin; no food is eaten, but the physiologic activities are carried on by the use of nutriment stored in the body, and the temperature of the animal is only slightly above that of the surrounding medium. The body temperature of all cold-blooded vertebrates-cyclostomes, elasmobranchs, fishes, amphibians, and reptiles-varies with the surrounding medium. Frogs cannot be entirely frozen, as is often reported since death ensues if the heart is frozen. In warm countries many amphibians seek a moist place of concealment; they pass the hotter part of the year in a quiet, torpid condition; they aestivate.

The poison glands of the leopard frog have already been mentioned. Certain salamanders and newts are also provided with poison glands. As a means of defence, the poison is very effective since an animal that has once felt the effects of an encounter with a poisonous amphibian will not soon repeat the experiment. Some of the most poisonous species, for example, Salamandra  salamandra, are said to be warningly coloured. Dogs and cats that catch and bite Bufo Marin us often die from the toxic effects of their secretions.

From fossils, it has been determined that amphibians first appeared during the Age of Fishes in the Devonian period.  From that time on they increased so rapidly in numbers that the Late Paleozoic or Carboniferous period is spoken of as the Age of Amphibians. The Paleozoic amphibians are known as Stegocephali, a term that refers to the covered or mailed head, roofed over by dermal bones. Stegocephali were salamander-like animals that probably lived in freshwater or on land. Some of them are called labyrinthodonts because the dentine of their teeth is much folded. Primitive reptiles ( cotylosaurs) and perhaps mammals stemmed directly from stegocephalians, and the stegocephalians themselves came from crossopterygian ancestors.

The newts belong to the salamander family. The crimson-spotted newt, Diemictylus viridescens, lives in the water as a larva; but when it is about one inch long it loses its gills and usually lives on land for about one or two years. During its terrestrial life, it is a bright coral red in colour and is known as the red eft. It then returns to the water and changes to the adult colouration of yellowish green with black spots on the undersurface and a row of black-bordered crimson spots on both sides. The cold slimy skin of the salamanders gave rise to the belief in medieval times that the salamanders could live in fire and not be injured by it. The skin of the fire salamander of Europe secretes a particularly poisonous substance. This species is black with bright yellow spots and therefore very conspicuous; its colours are supposed to warn other animals that it is dangerous.

The family Bufonidae includes over 100 species of toads, most of which belong to the genus Bufo. About 15 species of this genus have been reported from the United States. The common toad of the northeastern United States, Bufo terrestris (formerly americanus) , possesses a rough, warty skin, but it does not cause appearance of warts upon the hands of those who handle it, as is often supposed. Toads secrete a milky poisonous Suid by means of glands in the skin, which protects them from many animals that would otherwise be important enemies. During ‘the day they remain concealed in some dark damp place, but at night they hop about, fceding upon worms, snails, and especially insects, which they capture with their sticky tongues as frogs do. 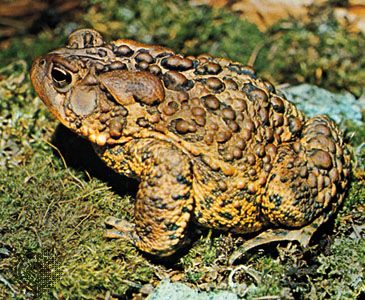 Tree frogs are usually arboreal amphibians with adhesive disks on their toes and fingers that usually enable them to climb trees. They are provided with large vocal sacs and have a correspondingly loud voice. Of the more than 180 species, 21 occur in the United States and about 130 in Central and South America. The common tree frog, Hyla versicolor , is about two inches long. Other common tree frogs are the spring peeper, Hyla crucifer, and the cricket frog, Acris gryllus.

The family Ranidae contains, the true frogs. These occur in all parts of the globe except Australia, New Zealand, and southern South America. Only one genus, Rana, and about 16 species live in the United States. Of these, the leopard frog is the most common. The bullfrog Rana catesbeiana  is the largest/of the family in this country, often reaching/a body length of 6 or 8 inches. Bullfrogs usually remain in or near water. They possess a deep bass voice like that of a bull. The tadpoles do n0t be come frogs the first year, as do those of the leopard frog, but transform during the second or even the third year. Other true frogs include the green frog Rana clamitans, the eastern wood frog Rana sylvatica, and the pickerel frog Rana palustris. 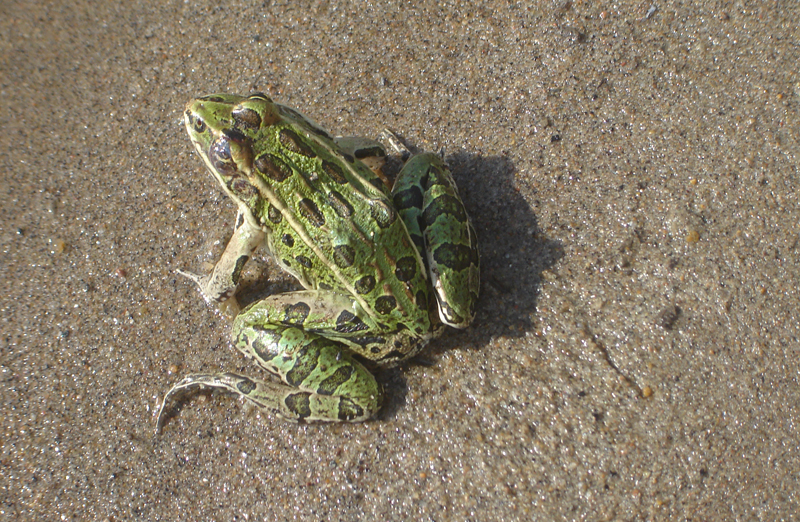