Hormones and the endocrine system

Hormones can be defined as chemical messengers. They are produced by endocrine glands of epithelial origin and are released directly into body fluids such as hemolymph or blood. Hormones are synthesized intracellularly where they may be stored in vesicles and are released by exocytosis.

Protein, peptide, and catecholamine hormones are transported around the body in solution. They bind to receptors on the cell membrane; the hormone-receptor complex activates the production and release of intracellular second messengers. (The extracellular protein hormone is the first messenger.) An example of a second messenger is cAMP. Here the protein hormone binds to a receptor and the complex activates adenyl cyclase which facilitates the conversion of ATP to cAMP. cAMP, the second messenger, in turn, promotes the activation of protein kinases within the cell which then activate phosphorylases.

Steroid hormones diffuse across the cell membrane where they bind to a cytoplasmic receptor. The hormone-receptor complex is received by an acceptor on the chromosome, resulting in increased transcription of DNA.

Concentrations of hormones in body fluids are low (10–11–10–12 M) and are normally under the control of negative feedback processes. Positive feedback may be utilized; for example high levels of estrogen from the ovary stimulate an increased release of luteotrophic hormone from the anterior pituitary, leading to ovulation, in the menstrual cycle in women.

There is often a hierarchy of endocrine control. Blood levels of thyroxine are under the control of the anterior pituitary through the mediation of thyroidstimulating hormone (TSH); the anterior pituitary is, in turn, under the control of tropic hormones secreted by neurosecretory cells in the hypothalamus, here secreting thyrotropin-releasing factor (TRF), which stimulates synthesis/release of TSH. High levels of thyroxine inhibit TRF production through a long negative feedback loop and inhibit TSH through a short negative feedback loop An example of nervous–endocrine co-operation is seen in milk release in a suckling baby: suckling results in nervous impulses being sent to the brain, which results in increased release of oxytocin by the hypothalamus/posterior pituitary system; oxytocin facilitates milk ejection. 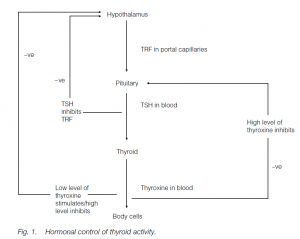 Neurosecretory cells and hormones are found in most metazoan phyla, from Cnidaria to Chordata, the hormones usually affecting reproduction and growth. Molting during crustacean growth is an example of an invertebrate hormonally controlled system. The epithelial-derived Y organ at the eyestalk base produces ecdysone which promotes molting. It is regulated by neurosecretory cells in the X organ of the eyestalk: hormones from the X gland are transported along the axons and are stored in their swollen ends within the sinus gland, also within the eyestalk, and from the sinus gland they are released into the hemolymph. The X gland/sinus gland hormone inhibits molting by preventing the release of ecdysone from the Y gland. Increasing day length in the spring results in a nervous inhibition of X gland/sinus gland activity, permitting the release of ecdysone and a subsequent molt. (A similar system promotes metamorphosis in holometabolous insects. 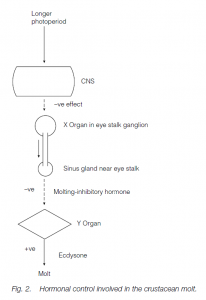 Posterior pituitary hormones are neurosecretions from hypothalamic cells ending in the posterior pituitary. ADH (vasopressin) promotes water resorption from the kidney, water uptake across amphibian skin, and contraction of arteriolar muscles. Oxytocin promotes smooth muscle contraction (e.g. in milk ejection or in the uterus during labor).

Anterior pituitary peptide or protein hormones made by discrete cell types include:

Among the systems invertebrates are: