Diploblasty is characterized by outer ectoderm (epidermis) and inner endoderm (gastrodermis), lining a gut (enteron or gastrocoel). It is characteristic of Cnidaria (sea-anenomes, jellyfishes, etc.). The gut can be closed at the mouth to provide a liquid-filled chamber of constant volume to assist support; however, this support role is compromised when the mouth is opened to ingest food or to eliminate waste.

Triploblasty is characterized by outer ectoderm, a middle mesoderm and inner endoderm (lining the gut). It is characteristic of most Metazoa (apart from Mesozoa, Cnidaria and Ctenophora).

Body cavities permit rapid movements (by predators or by prey): the body cavity can function as a hydrostatic skeleton through containing noncompressible but deformable liquid, and so transfer forces generated by muscles to other parts of the body. 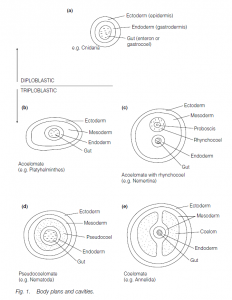 In the acoelomate condition, there is no enclosed body cavity. Support is effected by the turgor of the tissues contained within the ectoderm (which may be bounded by a tough cuticle). This condition is characteristic of the Platyhelminthes (e.g. flatworms such as liver flukes).

In the acoelomate Nemertina (ribbon worms), a rhynchocoel surrounds the retracted proboscis. The fluid within this cavity allows muscular force to be transmitted, resulting in eversion of the proboscis. This localized phenomenon uses the same principle as is found in a hydrostatic skeleton.

In the pseudocoelomate condition, a body cavity is derived from the blastocoel, lined by the endoderm and the mesoderm-derived body wall muscles. It functions as a hydrostatic skeleton and can be used to house organs such as the gonads. It is characteristic of Nematoda (roundworms) and Rotifera. 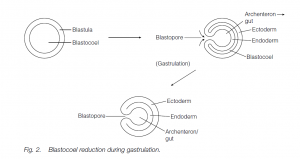 In the coelomate condition, there is a coelom or ‘true’ body cavity, lined with muscles (derived from mesoderm) both internally and externally, thus permitting a better control over the movement of the coelomic fluid. It is characteristic of Annelida (e.g. earthworms and ragworms) and Chordata. Further control is facilitated by the separation of the coelom into compartments, as in the transverse metameric segmentation seen in annelid worms. In some coelomates (protostomes) the coelom forms by the splitting of the mesodermal cell mass (schizocoely). In deuterostome coelomates the coelom forms from out pocketing of the archenteron (the cavity which results from gastrulation and will give rise to the gut lumen); the pockets separate from the archenteron and fuse to form the coelom, the walls being the mesoderm (enterocele).

The blastocoel is largely eliminated in the development of forms such as annelids. It persists to form the main body cavity, the hemocoel, in Mollusca and particularly Arthropoda where the hemocoel is filled with ‘blood’ (hemolymph) which bathes the body organs in the open circulation; the true coelom is greatly reduced. 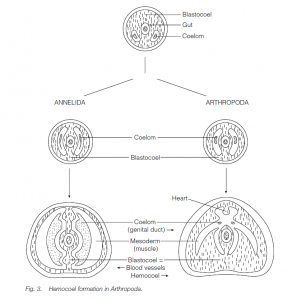