When protoplasm is studied chemically, it is found to be built up of the same elements that occur in nonliving materials.
The 20 elements listed below appear to be essential to protoplasm 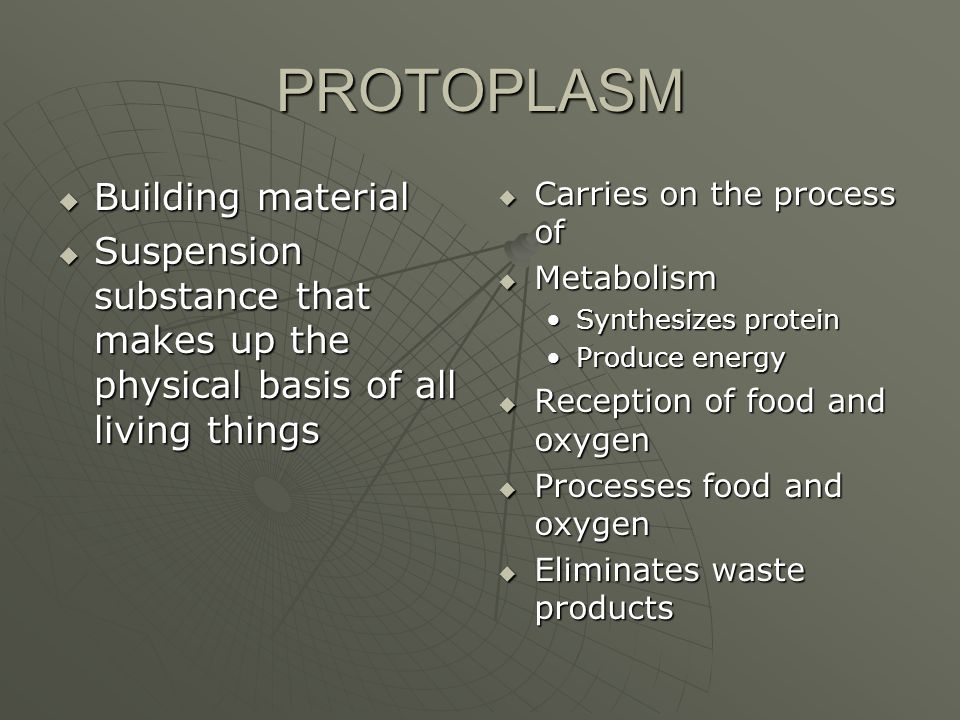 Compounds are made up of one or more molecules of the same kind; for example, water, sugar, and carbon dioxide are compounds. Molecules are so small that one computation shows that there are about 1,000,000 molecules in a single bacterium. A molecule is the smallest particle of a substance that possesses the chemical nature of that substance.

For example, a molecule of water can be subdivided, but it ceases to be water when it is broken down into the 2 elements, hydrogen and oxygen, of which it is composed. Elements, such as hydrogen and oxygen, are known as atoms. More than 100
different elements or kinds of atoms are known. Many of these atoms can combine in various ways to form molecules; for example, 2 atoms of hydrogen, combined with 1 atom of oxygen, produce 1 molecule of water; 1 atom of carbon and 2 atoms of oxygen combine to form 1 molecule of carbon dioxide.

Water is the most common compound in protoplasm, making up from about 60 to 96 per cent of it. Water is ingested in greater amounts than all other substances combined, and it is the chief excretion. It is the vehicle of the principal foods and excretion products, for most of these are dissolved as they enter or leave the body. Actually, there is hardly a physiologic process in which water is not of fundamental importance.

Inorganic salts are essential for life processes. They are present in solution in the protoplasm and in body fluids. In body fluids they are very similar in concentration to the salts in sea water. Although small in amount, they are important since certain salts in certain proportions are necessary for normal life activities. For example, if the calcium content of the blood is lowered sufficiently, convulsions and death ensue; and if sodium, calcium, and potassium are not properly balanced, the muscles of the heart do not function normally. The presence of certain salts is quite obvious to us, since calcium phosphate and calcium carbonate make up about 65 per cent of bone.

The three principal classes of organic compounds in protoplasm are known as carbohydrates, fats, and proteins. Carbohydrates and fats are composed entirely of carbon, hydrogen, and oxygen; protein has in addition nitrogen, sulphur, and phosphorus. Common carbohydrates are starch and sugar. The word carbohydrate is derived from the Latin term carbo, meaning coal, and the Greek term hydor, meaning water. Coal is a form of carbon. Carbohydrates are compounds of carbon, hydrogen, and oxygen in which the ratio of hydrogen and oxygen atoms is the same as that in water, that is, 2 of hydrogen to 1 of oxygen (H20). Carbohydrates are stored in the body in d form called glycogen, especially in the liver and the muscle cells. They are particularly valuable as fuel for the body, but are also used in the structure of protoplasm. One of the simple carbohydrates, a sugar called glucose, seems to be of particular importance, probably as a fuel. If there is too little glucose present, nerves and muscles become more irritable, and death may follow convulsions, just as when the calcium content of the blood becomes too low.

If the sugar content of the blood is too high, a disease known as diabetes results; this condition can be corrected by injection of the hormone insulin. Fats differ from carbohydrates in the structure of their molecules. Less oxygen is present in proportion to the carbon and hydrogen Fats, like carbohydrates, serve principally as fuel, and much fat is stored in the body where it can be used when needed. When deposited just beneath the skin, it insulates the body, since it is a poor conductor of heat. Proteins are the primary constituents of protoplasm.