Plasmids are small circular double-stranded, chromosomal DNA molecules, which occur in most bacterial organisms. The term was first introduced by Joshua Lederberg in 1952. Plasmids are separated and replicated separately from the bacterial genome. They usually only bear a few chromosomes. In bacteria and certain archaea, plasmids are present. The plasmid is not an important bacterial element but is often advantageous to the bacteria. Plasmids have a high copy number. The size varies from 1 to 1000kbp. Plasmids serve as important tools in genetics and biotechnology labs, where they are commonly used to multiply (make many copies of) or express particular genes. Many plasmids are commercially available for such uses. The gene to be replicated is inserted into copies of a plasmid containing genes that make cells resistant to particular antibiotics and a multiple cloning site (MCS, or polylinker), which is a short region containing several commonly used restriction sites allowing the easy insertion of DNA fragments at this location.

Let’s discuss why plasmid is an important cloning vector!

In genetic engineering, we need gene of interest copies in numerous numbers. So we use a vector, mostly a plasmid to multiply the gene of interest. It is done by incorporating the vector inside a bacteria and make multiple copies. As the bacteria grow in optimal temperature and Ph conditions, the plasmids that hold the gene of interest also multiply. Plasmid vectors are important to have multiple cloning sites with various restriction enzyme sites, they have selectable marker genes, and they have a way to detect when a foreign piece of DNA.

The ori is a sequence in which DNA replication starts enabling a plasmid to reproduce itself such that it has to thrive within cells. Some replication origins produce several copies of plasmid, and others only produce few copies, based on how they are regulated.

A multiple cloning site (MCS) is a DNA region within a plasmid containing multiple specific sites for the enzyme restriction cutting. Without affecting all other plasmids it permits the introduction of foreign DNA. 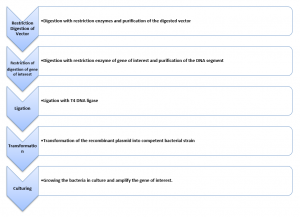 Plasmids are to make large amounts of proteins. In this case, researchers grow bacteria containing a plasmid harboring the gene of interest. Just as the bacterium produces proteins to confer its antibiotic resistance, it can also be induced to produce large amounts of proteins from the inserted gene. This is a cheap and easy way of mass-producing a gene or the protein it then codes for, for example, insulin or even antibiotics.

Extraction of Gene of Interest

Integration of Plasmid into the chromosome

Instead of the integrative plasmid with the homologous recombination design, most of the bacteria cannot be converted with linear DNA. Microorganisms with replicative plasmids may be supplemented with DNA, but these are intrinsically unstable. In order for exogenous DNA to be stabilized, a gene must be irreversibly incorporated within the cell into a functional molecule of DNA. This can be achieved by a homologous process of recombination.