ELISA or EIA is a method widely used for measuring the concentration of a particular molecule (E.g., a hormone or drug) in a fluid such as serum or urine. The molecule is detected by antibodies that have been made against it. In simple words, in ELISA an antigen (unknown amount) is immobilized on solid support (usually a polystyrene microtiter plate) either non-specifically (via adsorption to the surface) or specifically (via capture by another antibody specific to the same antigen, in a “sandwich” ELISA). Then a specific antibody is added over the surface so that it can bind to the antigen. This antibody is linked (conjugated) to an enzyme. Between each step, the plate is typically washed with a mild detergent solution to remove any proteins or antibodies that are not specifically bound. Then a substrate is added that the enzyme can convert to some detectable signal which indicates the quantity of antigen in the sample. Older ELISAs utilize chromogenic substrates, though newer assays employ fluorogenic substrates enabling much higher sensitivity.

ELISA can be classified into the following types:

The antigen is diluted in a buffer, commonly a high pH (9.6) (carbonate or bicarbonate buffer or neutral phosphate-buffered saline, PBS) because the buffer contains no other proteins that might compete with the target antigen for attachment to the plastic solid phase. After incubation, any excess antigen is removed by a simple washing step, by flooding and emptying the wells, using a neutral buffered solution (e.g., PBS). Antibodies conjugated with an enzyme can now be added, and are directed specifically against antigenic sites on the solid phase-bound reagent. The conjugated antibodies are diluted in a buffer containing some substance that inhibits passive adsorption of protein, but that still allows immunological binding. Such substances either are other proteins, which are added at a high concentration to compete for the solid-phase sites with the antibody protein, or are detergents at low concentration termed blocking agents, and the buffers they help formulate, which are termed blocking buffers. On incubation, antibodies bind to the antigen. Again, a simple washing step is then used to remove unbound antibodies (stage iv). Stage v involves the addition of a suitable substrate or substrate/chromogen combination for the particular enzyme attached to the antibodies. The objective is to allow the development of a color reaction through enzymatic catalysis. The reaction is allowed to progress for a defined period, after which the reaction is stopped (stage vi) by altering the pH of the system, or by adding an inhibiting reactant. Finally, the color is quantified by the use of a spectrophotometer reading (stage vii) at the appropriate wavelength for the color produced. 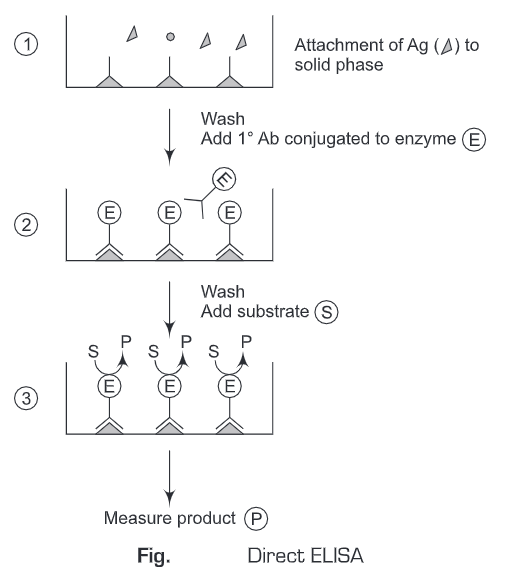 The indirect ELISA is similar to the direct one in that the antigen is directly attached to the solid phase and then targeted by added antibodies. The added antibodies are not labeled with enzyme but are targeted by antibodies linked to an enzyme. Such antibodies are produced against the immunoglobulins of the species in which the detecting antibodies are produced and are termed anti-species conjugates. Thus, if the detecting antibodies were produced in rabbits, the enzyme-labeled antibodies would have to be anti-rabbit Igs in nature. The indirect ELISA offers the advantage that a number of antisera can be examined for binding to a given antigen by using a single anti- species conjugate. Such techniques have been extensively used in diagnostic applications, particularly for examining large number of samples. One disadvantage with this technique is the varying degree of nonspecific binding in individual sera. This tends to widen the variability in assay results and thus, increases the need to process many sera. Eg:- Indirect ELISA is used to detect the presence of serum Abs against HIV (AIDS). 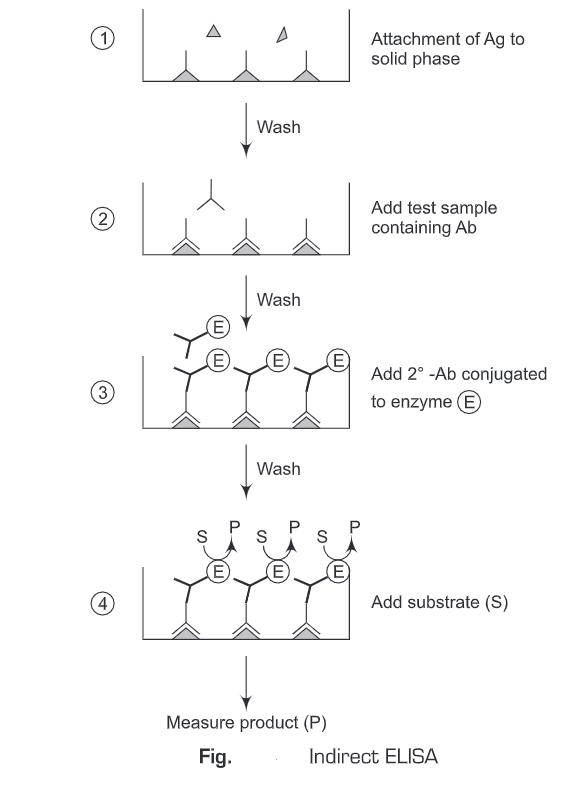 The term competition describes assays which involve the quantification of a substance by its ability to interfere with an established pretitrated system. The assays can be used for the measurement of either antibody or antigen. 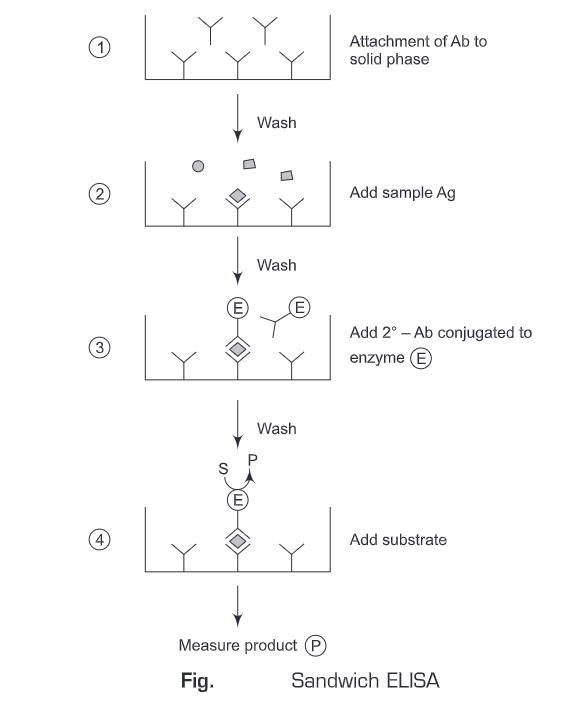 Chemiluminescence is the generation of electromagnetic radiation as light by the release of energy from a chemical reaction.

Chemiluminescence is more sensitive than chromogenic assays. Its detection limit can be increased 10-fold. The addition of enhancing agents, increases the detection limit by 200-fold. 5 X 10-18 moles (5 atto moles) of target Ag have been detected. 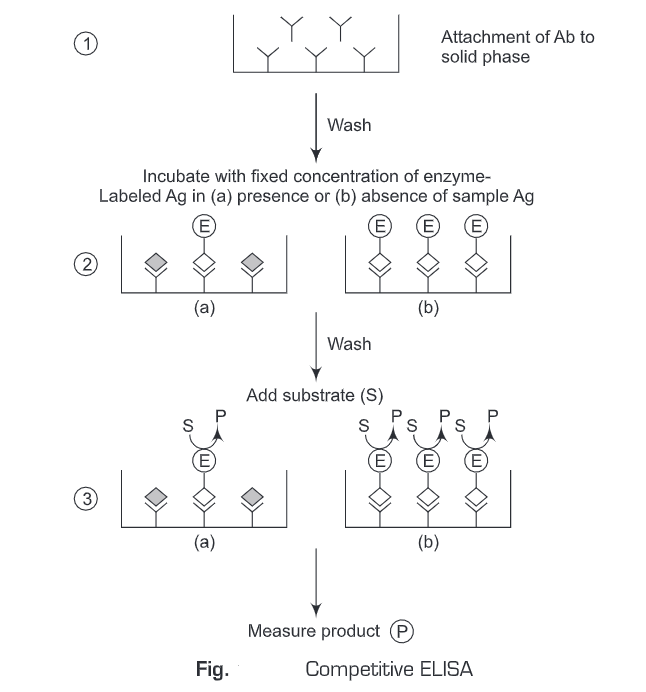 The Enzyme-linked immunosorbent spot (ELISPOT) assay is a common method for monitoring immune responses in humans and animals. It was developed by Cecil Czerkinsky in 1983. ELISPOT allows the quantitative determination of a number of cells in a population that are producing Abs specific for a given Ag or Ag for which one has a specific Ab. ELISpot assays employ the sandwich enzyme-linked immunosorbent assay (ELISA) technique.

Immunoassays are widely used in clinical, reference and research laboratories for the detection of specific pathogens or pathogen products. Its desirable to use immunoassays that have high sensitivity i.e., the ability to detect very low quantities of antigen-antibody complexes. ELISA is amongst the most sensitive serological tests. In ELISA, Ab is labeled with enzymes for Ag detection. The covalent attachment of enzymes to Ab molecules decreases the amount of Ag-Ab complex required to detect a reaction. This increased sensitivity has been used in clinical diagnostics and biological research. As ELISA can be performed to evaluate either the presence of antigen or the presence of antibody in a sample, it is a useful tool for determining serum antibody concentrations (such as with the HIV test). It has also found applications in the food industry in detecting potential food allergens such as milk, peanuts, walnuts, almonds, and eggs. ELISA can also be used in toxicology as a rapid presumptive screen for certain classes of drugs. Thus, ELISA has numerous applications in the detection and quantitation for several Ags and Abs . Nowadays hundreds of ELISA kits are manufactured for 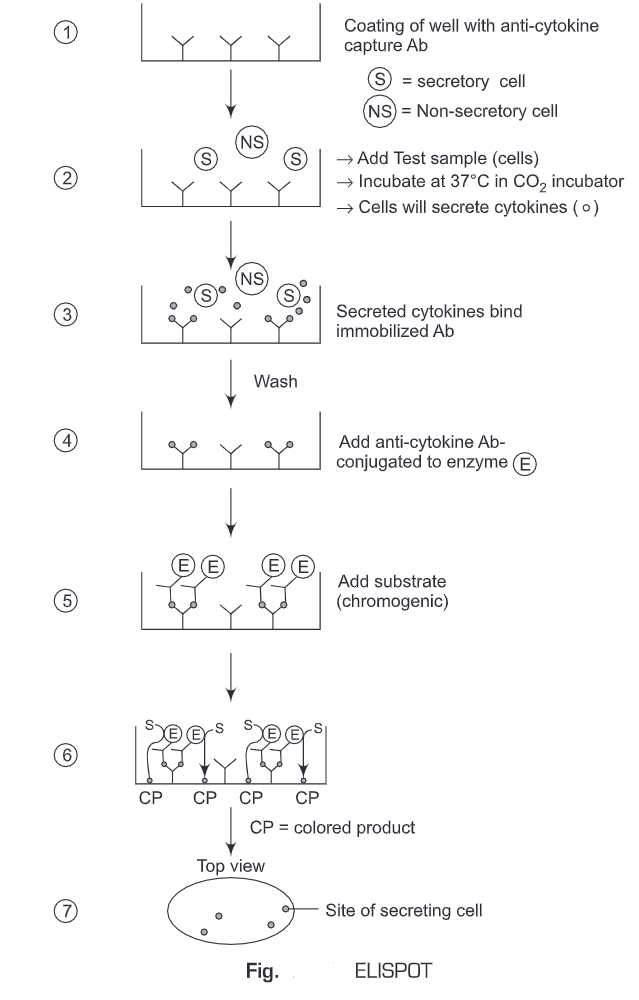 *For detecting allergens in food and house dust

*For measuring toxins in contaminated food 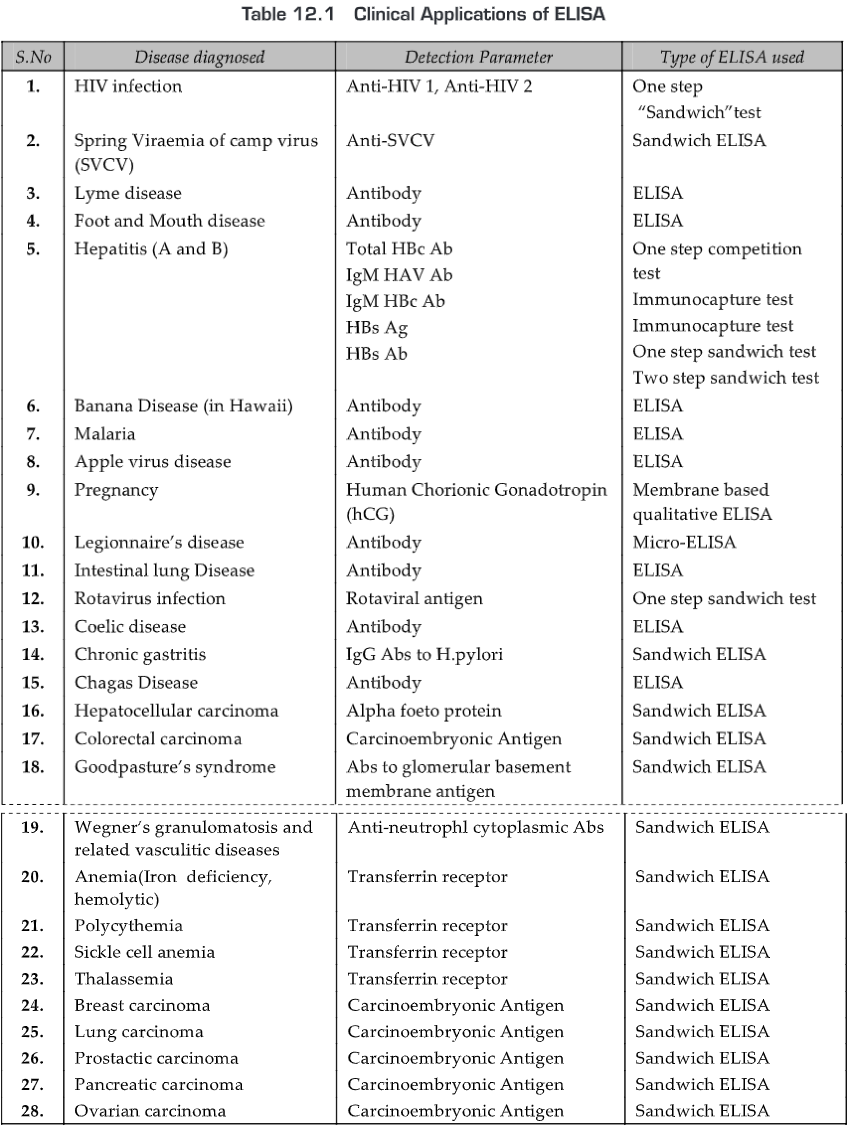 Prognosis of Diseases means how we are expected to do after a disease is diagnosed. It is based on many things, including the stage of disease, kind of disease, response to treatment, and our general state of health.