Sickle cell anemia, it is also called sickle cell disease (SCD), it’s a genetical disorder of the red blood cells (RBCs). Basically RBCs takes disc-like shaped which provide them with the flexibility to move through even the thinnest blood vessels. This makes them sticky and rigid to getting trapped in small vessels, which blocks blood from reaching different parts of the body. This can cause severe pain and damage to the vascular tissues system of the body. 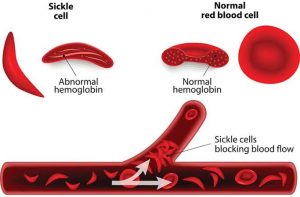 Following are the most common types of SCD:

THERE ALSO ARE A FEW RARE TYPES OF SCD