The living cells of the flowering plant which are actively doing work require oxygen for aerobic respiration and they give off carbon dioxide. During daylight hours the rate of photosynthesis in the parts of the plant above ground exceeds the rate of respiration and therefore the net flow of gases is towards the intake of C02 and the excretion of oxygen. In the leaf gas exchange takes place primarily through the stomata. Stomata are also present in the stems of herbaceous plants.

In woody stems and roots gas exchange takes place through lenticels. The main actively respiring tissues in woody stems and roots are the cork cambium, the vascular cambium, phloem and the cortex. These receive oxygen by diffusion through the intercellular spaces of the complementary tissue in the lenticel. There is probably a considerable amount of oxygen delivered to the innermost of these tissues from the water in the xylem.

Although oxygen is only slightly soluble in water the water absorbed by the roots is likely to be saturated and the volume of water passing through the plant is considerable. Stomata occur in the lower epidermis of dicotyledonous leaves and in the upper epidermis of water plants with floating leaves, e.g. Potamogeton, lily. Both surfaces of monocotyledons. Also on stems of herbs, scale leaves, etc.

Water loss through the stomata is inevitable. In xerophytic plants the stomata are frequently deep-set so that saturated air immediately outside the stoma pore reduces the water diffusion gradient. The waxy cuticle is thicker than in the mesophyte leaf, and the epidermis is frequently more than one cell thick (addition of hypodermis). The stomatal mechanism is not entirely clear.

High turgidity of the guard cells causes opening of the pore, achieved by the accumulation of sugars in the vacuole (from the starch grains in the cytoplasm?). Guard cells differ from other cells in the leaf in that the starch —> sugar reaction takes place in the light and starch build-up occurs at night. It may be that chloroplasts in the guard cells have little or no photosynthetic activity (certainly a high concentration of soluble end products in the cell would inhibit the reaction) but are incidental in the plastid, i.e . starch grain, formation in the cell. Thus, in the light, starch is hydrolysed to sugars, causing turgidity. In the dark, the sugars are condensed back to starch, causing loss of turgidity and pore closure. 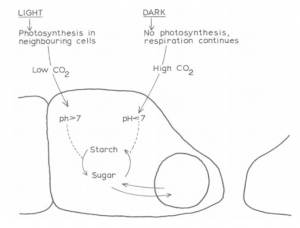 Such changes would clearly involve specific enzyme mechanisms such as starch phosphorylases, which may or may not be light influenced; in some plants stomatal opening and closing persists even in constant artificial light. An additional consideration is the C02 level of sub-stomatal air. When this falls below 0·03% (atmospheric concentration) stomatal opening commences, increasing to concentrations about 0·01%. Such conditions prevail during active photosynthesis in the leaf.

At night the C02 concentration would build up above that concentration by respiration and the stomata would close. This is in agreement with experiments causing artificially high and low pHs by ammonia and HCl perfusion. In pHs above seven guard cells were starch free and pores open; in pHs below seven guard cells contained starch and pores closed.