Oxygen is relatively insoluble in plasma (the liquid part of vertebrate blood): only 0.3 cm3 of oxygen per 100 cm3 plasma in mammals. Special chromoproteins known as respiratory pigments reversibly bind oxygen and transport it.

In vertebrates, the pigment is red and is called hemoglobin (Hb). Human Hb is made up of four globin protein chains, each linked to an iron-containing heme. The iron in each heme can bind to one oxygen molecule: thus each Hb molecule can carry four oxygen molecules.

Combination of the first heme with oxygen increases the affinity of a second heme for oxygen, and so on. If a curve is plotted showing the percentage oxygen saturation for Hb against different oxygen tensions (or partial pressures: i.e. oxygen content in the blood), a sigmoid oxygen–hemoglobin dissociation Curve is obtained: the S-shape is due to the progressive increase in the oxygen-binding affinity of Hb. Fully oxygenated Hb allows the body to carry 70 times as much oxygen as would the plasma alone. Whether oxygen is taken up or released depends on the oxygen tension (pO2) of the surrounding plasma: the oxygen tension of the alveolar capillary plasma is high, so Hb tends to load oxygen in the alveolar capillaries; in the tissues it is low so Hb unloads. In tissue capillaries, the oxygen tension is such that Hb does not fully unload and oxygen can be held in reserve for spurts of activity. 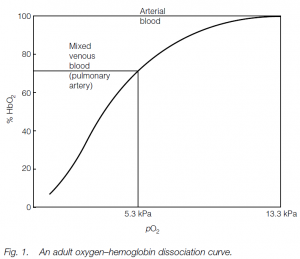 The oxygen–hemoglobin dissociation curve is shifted to the right by acidity in the blood (this is the Bohr shift. Thus oxygen is given up more readily in the tissues, an advantage when muscular work leads to a build-up of acid metabolites (including lactate during anaerobic metabolism) and thus there is a need for more oxygen.

Carbon dioxide is more soluble than oxygen in plasma, and some 7% of it is simply transported in solution; about 23% of the CO2 is bound to the globins of Hb. Most CO2 is carried in the blood combined with water to form bicarbonate (HCO3–) ions. This is promoted by the enzyme carbonic anhydrase in the red cells:

The increase in bicarbonate ions facilitates their diffusion into plasma: as they are lost from the red blood cells, the further dissociation of carbonic acid is promoted. More carbonic acid is formed from CO2 and this favors further uptake of the waste gas from the tissue. [Chloride ions flow into the red cells to correct the removal of negatively charged bicarbonate ions (the chloride shift).] At the lungs these processes are reversed. Note the differences between oxygen and carbon dioxide transport. 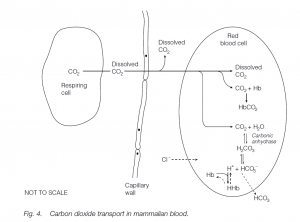 This red pigment is found in vertebrate skeletal muscle; it has one globin chain with one heme unit. Its rectangular dissociation curve is characteristic of a storage pigment, and the high oxygen affinity means that it will pick up oxygen from Hb and only loses it at very low oxygen tensions. 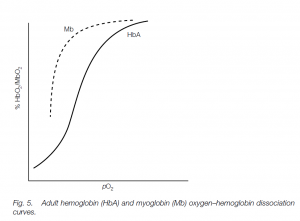 The heme moiety [consisting of four pyrrole rings joined by methane groups to form a super-ring with the ferric ion (Fe3+) at the center attached to the pyrrole nitrogens] is constant for all Hbs, although the globins vary. Hbs seem to have evolved independently many times (they are found in bacteria): a possible mechanism may be from cytochromes – the presence of cytochrome oxidase shows that all animals can combine metalloporphyrins with oxygen. However, there is no oxidation of the ferrous ion (Fe2+) to Fe3+, nor are enzymes involved in the formation of oxyhemoglobin. Invertebrate Hb-type molecules are often termed erythrocruorins: some are enormous. In the polychaete annelid lugworm Arenicola sp., the molecule has 180 subunits (unlike the tetrameric vertebrate Hbs) and is carried in solution in the plasma rather than in red blood cells; on the other hand, the polychaete Glycera sp. has a dimeric erythrocruorin.

This green metalloporphyrin is allied to Hb and is found in four families of polychaete annelids. In Serpula sp., both Hb and chlorocruorin are present, the former being more prevalent in younger worms; in Potamilla sp., the Hb is in the muscles and the chlorocruorin in the blood.

This nonheme, purple-red, iron-containing respiratory pigment is found in a number of invertebrate groups, including the brachiopod lampshell Lingula sp. It is usually in solution in the blood. In Golfingia sp., two polymorphs (variants) of the molecule exist. Sixteen atoms of iron combine with eight oxygen molecules and iron is oxidized from the ferrous to the ferric form.

This important blue-gray respiratory pigment is a non-heme, copper-based protein. It is found in molluscs and arthropods, particularly in the more advanced members of the phyla. The whelk Buccinium sp. has Hb in the muscles and hemocyanin in the blood. Units of hemocyanin have one copper atom with an approximately 200 amino acid protein chain attached. Two copper atoms are needed per oxygen molecule so a dimer is always present, and some hemocyanins are giant multimers; for example, the snail Helix sp. has a hemocyanin with a molecular weight of approximately 6.65 × 106. In deoxyhemocyanin, cuprous copper is always present; oxidation of hemocyanin results in cupric copper. The oxygen affinity of hemocyanin is less than for Hb, but a Bohr shift is demonstrable under acid conditions.