The group of nucleotides that specifies one amino acid is called codeword or codon. By then genetic code one means the collection of base sequence (codon) corresponding to each amino acid and to translational signal. The codon may be singlet, doublet, and triplet codon, which are customarily represented in terms of mRNA language.

During translation the codon of mRNA pair with the complementary anticodon of t-RNA since mRNA is read in a polar manner in the 53 direction, the codon are also written in 5 ——> 3 direction. Thus codon AUG is written as 5 AUG 3. The corresponding anti codon on t-RNA should therefore be written as 5 CAU 3, in a configuration the first bases of both codon and anti codon would be once at the 5 end and third base at the 3 end.

Three of the 64 codon do not specify any t RNA and were hence called nonsense codon. These codons are CAG (amber), UAA (Ochre) and UGA (Opal). Since they bring about termination of polypeptide chain synthesis they are also called termination codon. UGA was the first termination codon to be discovered. It was named ’amber after the graduate student named Bernstein (the German for amber).

About 150 amino acids are found in nature of which only 20 are specified by the genetic code and only these 20 amino acids take part in protein synthesis. Among the other amino acids in proteins are cystine and hydroxyl proline. A polypeptide chain typically contain about 100-300 amino acids and formed by specific arrangement of the 20 type of amino acids.

The genetic code has the following general properties.

1) The genetic code is a triplet

2) The code is non-overlapping

3) The code is comma less

Is the genetic code read in an uninterrupted manner from one end of the nucleic acid chain to the other? Or are these bases between successive codon? A code with commas could be represented as follows (the x represents a base acting as a comma).

A mutation resulting in the addition deletion of a base(C) would affect only slightly changed bases.

In such a code any mutation involving deletion of a base (C) would result in a drastic in the genetic message.

The entire series of amino acid following the deletion would change. All the available evidences indicate that the code is comma less. The work of Khorana and his associates gives clear evidence of a comma less code.

4) The code has polarity

If a gene is to specify the same protein repeatedly it is essential that the code must be read between fixed start (initation) and end (termination) points. It is also essential that the code must be read in a fixed direction. In the other words the code must have polarity. It is obvious that if the code is read in opposite direction it would specify two different proteins, since the codon would have reversed base sequence. Thus if the message given below is read from left to right the first codon, UUG would specify leucine. If it is read from right to left of codon would become GUU and would specify valine.

Thus it is seen that the sequence of amino acid constituting the protein would undergo a drastic change if the code is read in the opposite direction. The available evidence indicates that the message in mRNA is read in the 5——>3 direction the polypeptide chain is synthesized in the N—> C direction i.e. from amino (NH2) terminal to the carboxy (COOH) terminal.

5) The code is degenerate

6) The code is universal

The genetic code is valid for all organisms ranging from bacteria to man. It is essential and the same for all organisms therefore, it is said to be universal. The universality of the code was demonstrated by Marshall, Caskey, and Nirenberg (1967), who found that E. coli (bacterium), Xenopus laevis (Insect), and guinea pig aminoacyl t-RNA use almost the same code.

The triplet code is a degenerate one with many more codons than the number of the amino acid type coded. An experimental proof for this degeneracy was provided by the Wobble hypothesis proposed by Crick (1966). Since there are 61 codons specifying amino acid the cell would contain 61 different t-RNA molecules, each with a different anticodon. Actually, the number of t-RNA molecule type discovered is much less than 61. This implies that the anticodon of some t-RNA read more than one codon on mRNA. 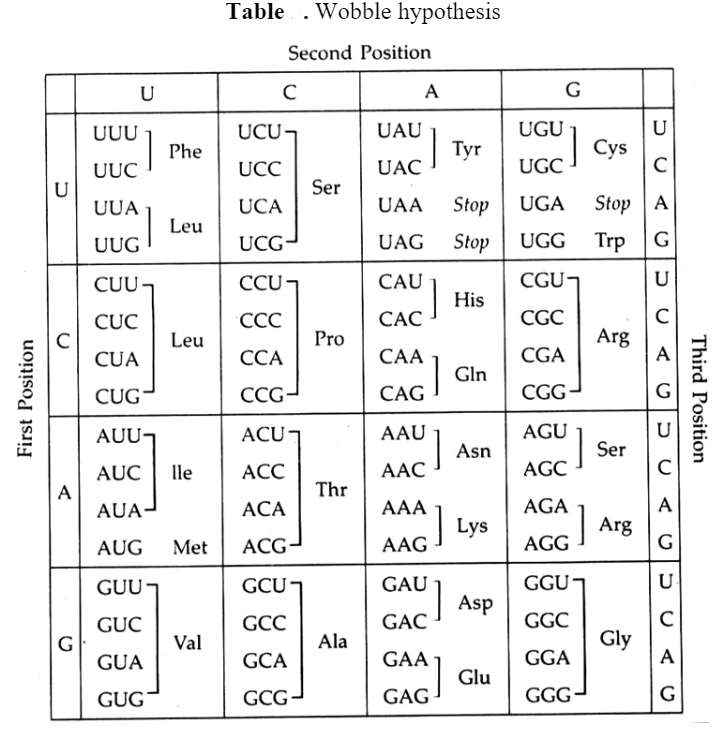 According to the Wobble hypothesis, only the first position of a triplet codon on mRNA has a precise pairing with the base of the t-RNA anticodon. The pairing of the third position base of the codon may be ambiguous and varies according to the nucleotide present in this position. Thus a single t-RNA type is able to recognize two or more codons differing only in the third base.