Spontaneous and induced types of mutation

Spontaneous mutations are the result of errors in natural biological processes, while induced mutations are due to agents in the environment that cause changes in DNA structure.

Mutations which occur under natural conditions are called “spontaneous mutation”. Mutagenic agent is not exactly known spontaneous mutations arise by the action of mutagens present in the environment. These mutagens include cosmic radiation, radioactive compounds, heat and such naturally occurring base analogues like caffeine. These are also considered under “induced mutations” as they are external agent bringing about mutations.

Truly spontaneous mutations are arising from tautomerism. The ability of molecule to exist in more than one chemical form is called “tautomerism”. All four common bases of DNA (A, G, C & T) have unusual tautomeric forms. The normal bases of DNA are usually present in the ‘keto’ form. As a result of tautomeric rearrangement, they can be transformed into the rare ‘enol’ form in which the distribution of electrons is slightly different. The tautomeric forms are capable of unusual (Forbidden) base pairing.

This unusual base pairing results in misreplication of the DNA strand, giving rise to mutants in some of the progeny. Thus A*, a rare tautomer of adenine (A) pairs with cytosine. This leads to G – C pairing in the next generation.

Many mutagens, and indeed many carcinogens, directly damage bases so severely that hydrogen bonding between base pairs is impaired or prevented and the damaged DNA can no longer act as a template. For instance, UV radiation generates cyclobutane type dimers, usually thymine dimers, between adjacent pyrimidines.

A gamma ray, or gamma radiation (y), is a penetrating electromagnetic radiation arising from the radioactive decay of atomic nuclei. It consists of the shortest wavelength electromagnetic waves and so imparts the highest photon energy. Paul Villard, a French chemist and physicist, discovered gamma radiation in 1900 while studying radiation emitted by radium. In 1903, Ernest Rutherford named this radiation gamma rays based on their relatively strong penetration of matter; in 1900 he had already named two less penetrating types of decay radiation (discovered by Henri Becquerel) alpha rays and beta rays in ascending order of penetrating power.

Gamma rays from radioactive decay are in the energy range from a few kilo electron volts (keV) to approximately 8 mega electronvolts (~8 MeV), corresponding to the typical energy levels in nuclei with reasonably long lifetimes. The energy spectrum of gamma rays can be used to identify the decaying radionuclides using gamma spectroscopy. Very-high-energy gamma rays in the 100-1000 tera electronvolt (TeV) range have been observed from sources such as the Cygnus X-3 microquasar.

Natural sources of gamma rays originating on Earth are mostly as a result of radioactive decay and secondary radiation from atmospheric interactions with cosmic ray particles. However, there are other rare natural sources, such as terrestrial gamma-ray flashes, which produce gamma rays from electron action upon the nucleus. Notable artificial sources of gamma rays include fission, such as that which occurs in nuclear reactors, and high energy physics experiments, such as neutral pion decay and nuclear fusion.

Gamma rays are ionizing radiation and are thus biologically hazardous. Due to their high penetration power, they can damage bone marrow and internal organs. Unlike alpha and beta rays, they pass easily through the body and thus pose a formidable radiation protection challenge, requiring shielding made from dense materials such as lead or concrete.

X-rays make up X-radiation, a form of high-energy electromagnetic radiation. Most X-rays have a wavelength ranging from 0.03 to 3 nanometres, corresponding to frequencies in the range 30 petahertz to 30 exahertz (3x 1016 Hz to 3×1019 Hz) and energies in the range 100 eV to 200 keV. X-ray wavelengths are shorter than those of UV rays and typically longer than those of gamma rays. In many languages, X-radiation is referred to as Roentgen radiation, after the German scientist Wilhelm Roentgen, who discovered it on November 8, 1895. He named it X-radiation to signify an unknown type of radiation. Spelling of X-ray(s) in the English language includes the variants x-ray(s), xray(s), and X ray(s).

Gamma rays and X-rays are both electromagnetic radiation, and since they overlap in the electromagnetic spectrum, the terminology varies between scientific disciplines. In some fields of physics, they are distinguished by their origin: Gamma rays are created by nuclear decay, while in the case of X-rays, the origin is outside the nucleus. In astrophysics, gamma rays are conventionally defined as having photon energies above 100 keV and are the subject of gamma-ray astronomy, while radiation below 100 keV is classified as X-rays and is the subject of X-ray astronomy. This convention stems from the early man-made X-rays, which had energies only up to 100 keV, whereas many gamma rays could go to higher energies. A large fraction of astronomical gamma rays are screened by Earth’s atmosphere. 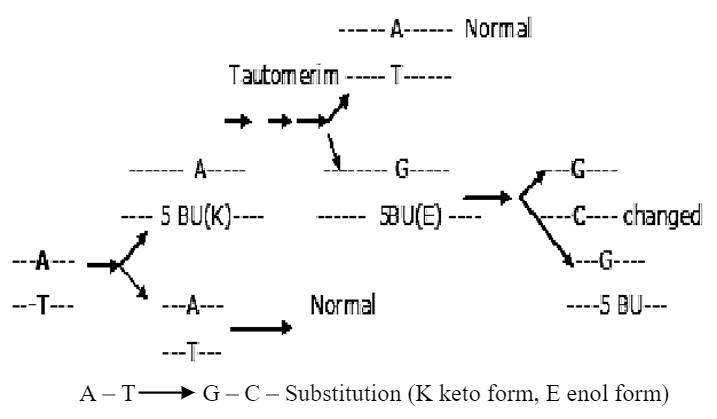 Can be read as either adenine or guanine. It normally pairs with thymine, but 2 AP undergo tautomerization into rare imino state, so 2 AP (imino) pairs with cytosine. Therefore it can produce Agents modifying purine and pyrimidine and agents labializing bases — It includes nitrous oxide, hydroxyl amine, and alkylating agents.

Deamination of adenine results in the formation of hypoxanthine. Hypoxanthine is much similar to guanine. Therefore hypoxanthine pairs with cytosine rather than thymine. Thus A — T — Pairing is replaced by G— C pairing.

Deamination of cytosine results in formation of uracil, uracil are similar to those of thymine. Therefore, instead of C—G pairing there is U—A pairing. Guanine is deaminated to xanthine. There is no change in pairing because in this case, xanthine behaves like guanine and pairs with cytosine. Instead of G-C pairing there is X-C deamination of guanine is non-mutagenic.

It is very specific in its action. It acts mainly with cytosine and guanine residues and brings about transition and mispairing. It deaminate cytosine to a base which pairs with adenine instead of guanine. Thus C — G pairing is changed to A — T pairing.

I) Dimethyl sulphate (DMS) – The main chemical reaction of these agents is alkylation at the N7 position of guanine or at the N-3 position of adenine residues. Alkylation increases the probability of ionization and introduces pairing error. The base-sugar linkage undergoes hydrolysis and releases the base from the DNA molecule. This creates a gap in one chain.

II) Ethylmethane sulphonate (EMS) – EMS specifically removes guanine from the chain. During replication the chain without gaps will give rise to normal DNA. In the chain with gaps, any base (A.T.G or C) may be inserted across the gap. This may be correct base or an incorrect one. In the next replication the gap is filled by a base which is complementary to the inserted base. Where the correct base is inserted the DNA is normal. Insertion of an incorrect base may result in a transversions or transition mutation. 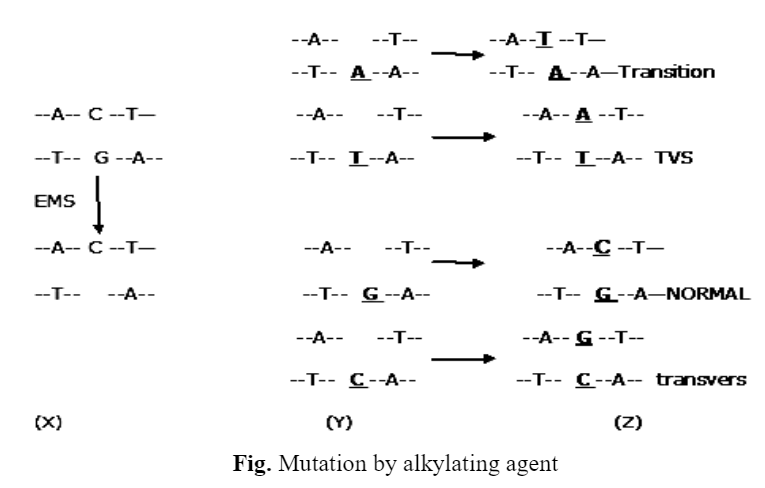 Certain fluorescent, acridine dyes such as proflavine and acridine orange causes mutation by insertion or deletion of bases. The acridine is planer (Flat) molecules, like the Purine bases, and can be intercalated between the bases of the DNA helix. This distorts the structure of DNA and can result in deletion or insertion of bases during replication. Intercalation resulting in inserting of base – Intercalation of the acridine molecule between two bases of the template strand results in the lengthening of the DNA molecule.