Base pair substitutions result in the incorporation of wrong bases during replication or repair of DNA, e.g. base switches are from A-T to G- C, C-G, or T-A. In base-pair switches one base of a triplet codon is substituted by another, resulting in a changed codon.

2). Substitution or replacement — (A replaced by G)

If purine base is substituted by a pyrimidine or vice versa, the substitution is called a transversion.

Mutations leading to base-pair substitutions presumably take place in two steps. A mutation in a DNA double-strand in which the purine base A is substituted by another purine base G (Transition). When the DNA replicates it will give rise to two chains, one normal like the parent chain and another mutant chain. Since the mutated base G pairs with C, the mutant DNA will have G-—>C at the point of mutation. Thus both chains have altered bases at the point of mutation. 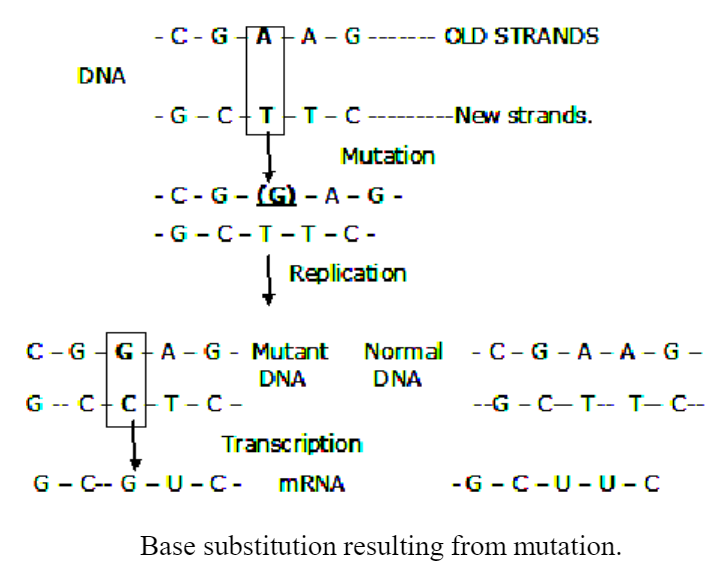 A mutation in which there is deletion or insertion of one or a few nucleotides is called a “frameshift mutation”. The name is derived from the fact that there is a shift in the reading frame backward or forward by one or two nucleotide addition or deletion of one or two bases results in a new sequence of codons which may code for entirely different amino acids. This results in a drastic change in the protein synthesized. The protein is usually nonfunctional. If the reading frame shifts by three nucleotides, the resulting protein is normal, except that it may lack one amino acid or may contain an extra amino acid.

The site of the mutation has an important bearing on whether the protein formed will be slightly or drastically altered. Since translation takes place in 5′ ———» 3′ direction, a frameshift mutation near the 3’ end of the gene results in only the terminal part of the polypeptide chain being altered. This may result in a functional protein. 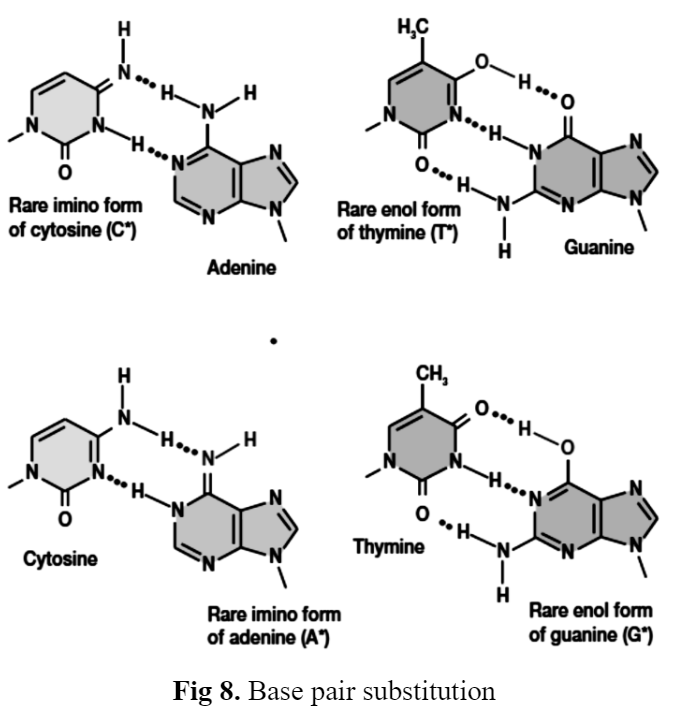 A frameshift mutation resulting from the insertion of a GC base pair is referred to as insertion mutation. The reading frame shift produces a different peptide after the addition.

The genetic message will be similarly disturbed if one or few bases are added (insertion) provided that the number of such bases is not, divisible by three.

Removal of one or a few bases from a nucleotide chain is called a deletion. It will be seen that the removal of even one base will throw the genetic massage out of the frame beyond the point of deletion. A new sequence will be established.

Mutations which are the reverse of nonsense mutations also occur. Thus a mutation can convert the termination codon to a sense codon specifying some amino acid. The a chain of human hemoglobin is normally 141 amino acid residues long. A mutation (U —> C) converts the termination codon UAA —» CAA. The codon for glutamine chain synthesis, therefore, proceeds beyond the normal termination point, producing a polypeptide chain containing 172 amino acids.

Silent mutations are of several types.

1. The genetic code is degenerate, i.e. more than one codon may specify an amino acid. e.g. — both AAG and AAA specify lysine. If the codon AAG undergoes a mutation to AAA the latter codon will specify lysine. This mutation is of the silent type because although there is a change in the base sequence of DNA there is no alteration in the amino acid sequence of the protein.

2. The codon change may result in an amino acid substitution, but this is not sufficient to modify the function of the protein appreciably.

3. The mutation may occur is a gene that is no longer functional or whose protein is not essential at that particular stage of testing.

4. Suppressor mutation may cause a mutation to become silent.

Neutral mutations are changes in DNA sequence that are neither beneficial nor detrimental to the ability of an organism to survive and reproduce. In population genetics, mutations in which natural selection does not affect the spread of the mutation in a species are termed neutral mutations. Neutral mutations that are inheritable and not linked to any genes under selection will either be lost or will replace all other alleles of the gene. This loss of the gene proceeds based on random sampling known as genetic drift. A neutral mutation that is in linkage disequilibrium with other alleles that are under selection may proceed to loss or fixation via genetic hitchhiking and/or background selection.

Many mutations in a genome may decrease an organism’s fitness i.e. an ability to survive and reproduce neutral mutations are selected against and not passed on to future generations. The most commonly observed mutations detectable as variation in the genetic makeup of organisms and populations appear to have no visible effect on the fitness of individuals and are therefore neutral.

According to Mendel’s principle of unit character, one gene controls one character, but sometimes single gene produces two related or unrelated phenotypic expressions. When a single gene controls two or more different traits, it is called pleiotropy or pleiotropism. Genes that affect multiple, related or unrelated, phenotypes are thus called as pleiotropic genes. Pleiotropy derives from Greek words pleio, which means “many.” and tropic, which means “affecting.”

Pleiotropy should not be confused with polygenic traits, in which multiple genes converge to result in a single phenotype. Pleiotropic genes may not have equal influence on all the traits they control. However, it may be that one gene may cause obviously a well-marked expression of some phenotypic trait (major effect) than the others with less evident phenotype (secondary effect).

Sickle-cell anemia is caused due to abnormal hemoglobin S which crystallizes into a sickle shape (half moon shape) and deforms the red blood cells (majore effect), thus giving the disease its name. This abnormal shape of the red blood cells become lodged in capillaries, leading to partial or total blockage of blood supply to parts of the body. Pain and local-tissue damage results, especially in those organs with extensive capillary networks such as the lungs, heart, spleen, brain, kidneys and hips (secondary effect).

Sickle-cell anemia is controlled by gene Hbs. Gene for normal hemoglobin is Hbs. The heterozygous condition (HbsHbs) is called the sickle cell trait. The heterozygous individuals are carriers of sickle cell genes and show signs of mild anemia as their RBCs become sickle-shaped (half-moon-shaped) in oxygen deficiency, but normal in normal conditions. The heterozygotes can be identified by microscopic examination of their blood.

Marriage between two carriers produces sickle cell anaemic, carriers and normal (disease-free) children in the ratio of 1:2:1. The affected individuals die when adult and ratio becomes 2:1. Birth of children with sickle-cell anaemia can be avoided by discouraging marriages between carriers.

A suppressor mutation is a second mutation that alleviates or reverts the phenotypic effects of an already existing mutation in a process defined as a synthetic rescue. Genetic suppression, therefore, restores the phenotype seen prior to the original background mutation.