One of the most important threats for human’s health is the genetic diseases. Genetic disease is a disorder caused by genetic factors (especially abnormalities) in the human genome. The four main types of genetic diseases are:

Earlier diagnosis of genetic diseases was based on biochemical assays which only reported the presence or absence of a gene product. But DNA based tests determine the existence of specific gene mutations. Test at DNA level use expression for the detection of a mutant gene. Diagnosis of genetic diseases at DNA level can be used for the identification of.

The principal aim of prenatal diagnosisis to give information to the families that whether they or their offspring are at risk or not. Approximately, 34% of all births are associated with genetic disorders, mental retardation or congenital defects. But the prenatal diagnosis of such cases has enabled obestricians to avoid birth of such fetus. There is a number of non-invasive and invasive techniques available for prenatal diagnosis. Each of them can be applied only during specific time periods during the pregnancy for greatest utility. Prenatal diagnosis includes both screening and diagnostic methods (techniques).

Prenatal screening for genetic diseases is performed when

Prenatal diagnosis, therefore, provides an opportunity to avoid the birth of mentally and physically handicapped babies and hence offers the potential for improvement in the health of human race.

Diagnosis before Onset of Symptoms

Diagnosis of a disease before the onset of symptoms can be done by analyzing the wild genotype and then comparing it with the mutant genotype by using the Genotyping with fluorescence labeled PCR primers method. Fluorescence resonance energy transfer is one of the most important tools for single nucleotide genotyping. We can also detect a single base mutation by this method.

The best example for carriers of hereditary disorders is sickle cell anemia.

MUTATIONS AT DIFFERENT SITES WITHIN ONE GENE

Mutations are changes in the DNA sequence caused by radiation, viruses, transposons and mutagenic chemicals. A condition caused by mutations in one or more genes is called a genetic disorder. Genetic diseases may be because of a single nucleotide mutation in a gene or more than two mutations in the same (intra-genic) or different (inter-genic) genes.

Sometimes, a number of different intra-genic mutations can lead to the same form of genetic disorder. For example, thalassemia. This is the most familiar type of thalassemia. It involves decreased production of normal adult hemoglobin (Hb A), (All hemoglobin consists of two parts: heme and globin). The globin part of Hb A has 4 protein sections called polypeptide chains.

Two of these chains are identical and are designated the alpha chains. The other two chains are also identical to one another but differ from the alpha chains and are termed the beta chains. In persons with beta-thalassemia, there is reduced or absent production of beta-globin chains. In people with beta-thalassemia, low levels of hemoglobin lead to a lack of oxygen in many parts of the body. Affected individuals have a shortage of red blood cells (anemia), which can cause pale skin, weakness, fatigue, and more serious complications. 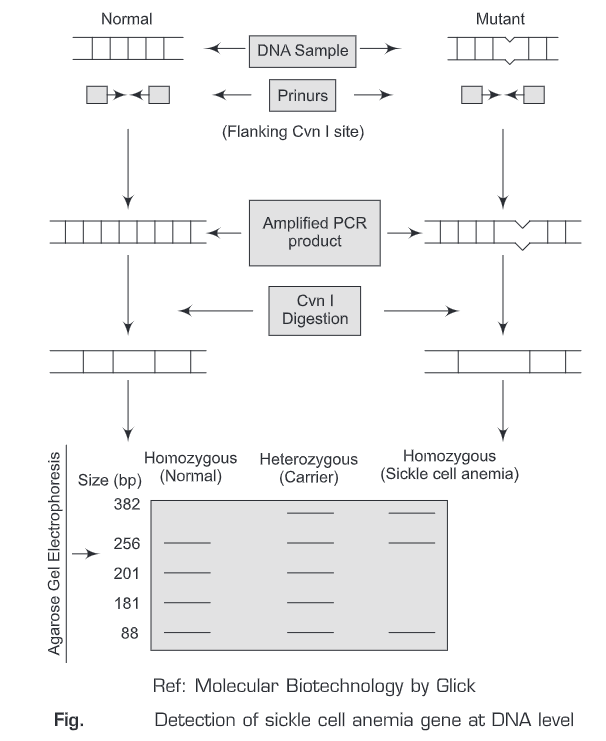 Therefore, a PCR-hybridization method has been devised to screen the different mutation sites within the same gene by using one reaction assay system. We’ll discuss PCR-hybridization method in context to screening of different mutation sites for β-thalassemia. Firstly, we synthesize a set of eight sequence (mutation) specific oligonucleotide probes (P1-P8) such that each one of the synthesized oligonucleotide perfectly matches with a segment of target gene that corresponds to a particular mutation. A poly dT (Thymidine homopolymer, = 400 nucleotides) tail is added to 3’end of all the eight oligonucleotids. This poly dT tail helps in the physical attachment of the oligonucleotide to a predefined discrete spot on the nylon membrane and the rest of the oligonucleotide is free for further hybridization step.

All the eight sequence (mutation) specific oligonucleotide probes (P1-P8) are bound to the nylon membrane. Simultaneously, DNA (segments) test sample is amplified by PCR using primers such that one of each of the pairs is labeled with biotin (B) at the 5’end. Then conditions that allow the perfect hybridization of amplified DNA sequence (biotin labeled) and membrane bound probes are applied. The amplified DNA sequence (biotin labeled) will bind to that specific probe (say P2) only which has the complementary sequence specific to a particular mutation.

Then, streptavidin (SA) conjugated with alkaline phosphatase, AP (or horse radish peroxidase or urease) is added to the hybridization reaction mixture. Streptavidin- alkaline phosphatase conjugate will bind to biotin labeled amplified DNA sequence only (as streptavidin has high affinity for biotin). After a particular duration of time when hybridization has occurred, the membrane is given a washing to remove any unbound material. Then a colorless substrate is added to the hybridized reaction mixture. A colored spot will appear at the position (P2) where the amplified DNA sequence matches with a specific (mutation at site 2) oligonucleotide probe. Thus, we can detect the exact mutation site (amongst the entire eight mutation site) in a single gene by using a single filter assay. 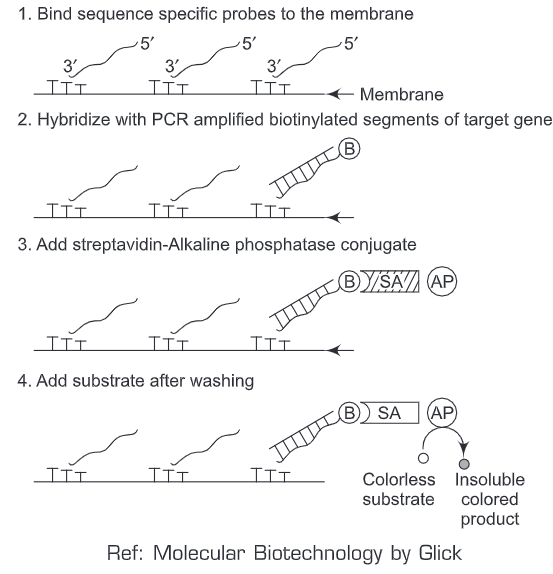