The concept of homeostasis is central to an understanding of animal physiology. Claude Bernard, in the mid-nineteenth century, noted that the ‘fixite’ of the internal environment (milieu Interieur) of animals was a condition of ‘free life’. For cells within an organism to be healthy and to function efficiently, variables within their internal environment (i.e. the fluids bathing the cells, and the blood and lymph) must be kept within closely defined limits. This relative stability impressed Walter Cannon who, in 1929, coined the term homeostasis, noting that it reflected an internal, dynamic equilibrium.

In the internal environment, there are many variables which are maintained or controlled at more or less constant levels. These include electrolyte (e.g. calcium) and organic solute (e.g. glucose) concentrations, pH, water balance, pressure, body temperature (in homoiotherms), etc.

Two types of variable are recognized. Regulated variables stay more or less the same for efficient body functioning. Action is automatically taken when there is a departure from the set-point (norm, optimal value), returning the value of that variable to the set-point. An example of a regulated variable is mammalian body temperature. Set-points can be ‘real’ as in the concentration of an ion, or ‘notional’ (‘as if’) where there may be a balance between the amount of a substance ingested or absorbed and the amount excreted.

Variations from the set-point are noted by a sensor (or monitor or error-detector) which sends messages to an interpreter (or comparator) which compares the measured index or factor against the set-point value. The output from the interpreter activates effectors. For example, blood temperature is sensed by temperature receptors in the periphery and the hypothalamus; hypothalamic interpreters compare the blood temperature with the set-point value; messages are sent to effectors such as sweat glands, hair-erection muscles, smooth muscles in peripheral arterioles, etc. Effector responses can be intrinsic (‘physiological’), as in sweating or cutaneous (skin) vasoconstriction or vasodilation, or they can be extrinsic (behavioural), as in seeking shade, exercising, taking off or putting on clothes. Variation in heart rate can ensure optimal oxygen delivery to, and levels in, cells: such variation is part of the homeostatic processes of the body, and changes in heart rate can be initiated by low blood pH, high CO2 levels, etc. The variation in heart rate is said to be demand-led.

Variation around the set-point is a part of homeostatic control: the value of the regulated variable oscillates above and below the set-point. Slight excess results in a correction which, through negative feedback (see below), results in a slight deficit which is, in turn, corrected, overshoots, and so on. The amplitude of the oscillations decreases with time, but they are never totally eliminated. This phenomenon is called hunting about the norm.

Positive feedback would result in the reinforcement of the excess or deficit (shivering when too hot); it does occur, infrequently, in physiological systems, where positive feedback can ‘kick-start’ a system. Anterior pituitary adrenocorticotropic hormone (ACTH) production results in more hypothalamic corticotropin-releasing factor (CRF) release, leading to more ACTH. However, ACTH also leads to release from the adrenal cortex of corticosteroids which have a negative feedback effect on the hypothalamic CRF release. Thus, in health, a positive feedback mechanism will always be overruled later by negative feedback. Other positive feedbacks include uterine contractions during mammalian birth labor, resulting in more oxytocin release stimulating further contraction, and the sucking reflex whereby the harder the mammalian infant sucks at the nipple, the more milk flows. 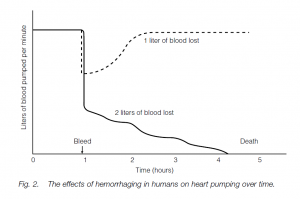 Feedforward is also observed and is an important component of many homeostatic control mechanisms. Anticipation of food leads to saliva secretion; food in the mouth or stomach leads to insulin release; rats drink before a meal; humans anticipate the amount of clothing they will need on a hot/cold day; birds migrate to warmer climates in winter while small mammals may hibernate. Note that some of these processes are intrinsic, others extrinsic.

Haemorrhaging in humans illustrates positive and negative feedback. Normally the heart pumps blood at about 5 litres per minute. If 1 litre of blood is lost, pumping effectiveness drops very sharply but is restored within about 2 hours. Vasoconstriction mediated by the renin-angiotensin system and arterial smooth muscle contraction, together with the processes of hemostasis, exerts overall negative feedback to maintain arterial blood pressure, cardiac output and oxygen delivery to tissues. If 2 litres of blood is lost, the pumping effectiveness of the heart falls over a 2-hour period, leading to death. This suggests that negative feedback compensation is overridden by other factors having positive feedback elements. (As blood is lost, arterial pressure drops; therefore, blood flow in the coronary circulation to the heart muscles falls, cardiac muscles receive less oxygen, pumping efficiency declines yet further and so on, in a vicious cycle.)

Set-points can be modified; for examples in fever in mammals, the temperature is regulated higher than normal to combat infection. Thus a higher temperature (e.g. >39°C) will be defended against challenges. This explains shivering, despite a high temperature during, say, influenza, where pyrogens stimulate ‘cold neurons’ which initiate heat-generating effector processes. The term rheostasis is used for the process of varying the controlled level of a feedback system.