A vigorous immune reaction can result in tissue damage to ‘self’; such reactions are termed hypersensitivities and could be seen as the ‘cost’ of an efficient immune system. Four types of hypersensitivity reaction are usually recognized:

Types I, III and IV are briefly described. Many hypersensitivities are related to occupations, for example, Farmer’s Lung is a type III hypersensitivity introduced by fungal spores in moldy hay, resulting in damaging antibody/antigen complexes.

IgE fastens by its C-terminal end to mast cells (or basophils). Allergens (such as pollen in hay-fever) act as antigens and bind to the variable, N-terminal region of the IgE. This alters the antibody shape, the mast cell membranes are activated and vasoactive amines such as histamine are released from the cells. Within a few minutes (‘immediately’) these can cause an anaphylactic reaction, including smooth muscle contraction, inflammation, etc. This reaction is the basis of hay-fever, some types of asthma, certain food allergies, etc. IgE-mediated reactions may have a natural ‘use’ in dislodging worm parasites from the gut. 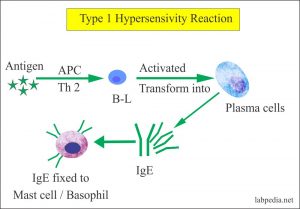 Antigen–antibody complexes can cause problems. In serum sickness, antigen excess (e.g. giving excessive horse anti-diphtheria serum: the patient makes anti-horse serum protein antibodies) leads to deposition of immune complexes in the glomerular beds of the kidneys or in the joints. In Farmer’s Lung, antibody excess (here combining with fungal spores [from moldy hay] in the respiratory tract) leads to an inflammatory Arthus reaction, peaking after about 12 hours: there are several similar hypersensitivities, many occupation-related (e.g. prawn-peelers’ asthma, pigeon-fanciers’ disease).

This hypersensitivity relies not on antibodies but on T lymphocytes. One type of this reaction involves patients who have become sensitized to tuberculin, found in Mycobacterium tuberculosis, the causative agent of tuberculosis. An injection of tuberculin into the skin results in tuberculin ingestion by macrophages and their presentation of it to T cells which infiltrate into the area after about 48 hours (‘delayed’), causing a hard, red swelling (induration and erythema).

Other type IV hypersensitivity reactions are a primary cause of cavitation in the lungs in tuberculosis, and are the basis of a number of allergies such as those to stainless-steel jewellery or hair dyes.

In autoimmunity the body has, through a variety of ways, become immune to ‘self’. Sometimes the immune system is exposed to antigens from which it was previously shielded, for example many vasectomized men make antibodies to their own sperm. In other cases, antigens combined with drugs may elicitresponses which act against the uncombined antigen itself. Further autoimmune reactions may be the result of breakdowns in the mechanisms whereby the immune system censors components which react against self. Many autoimmune diseases are found more commonly in old age, for example rheumatoid arthritis and a number of autoimmune thyroiditis conditions (e.g. Hashimoto’s disease). As with hypersensitivities, autoimmunity may be a price to be paid for having an efficient immune system.

Immunization involves the induction of immunity to protect an individual.

Natural passive immunization includes the passage of maternal IgG across the human placenta. In regions with a high incidence of tetanus, immunization of pregnant women with tetanus toxoid results in them making antitetanus IgG which is transmitted across the placenta to the fetus, and can protect the newborn from tetanus. In humans, IgA is transmitted to the baby’s gut via colostrum and milk.

Artificial passive immunization is effected when immunodeficient patients are given doses of antibodies from a donor; travelers to the tropics may be given ‘pooled γ-globulins’ (antibodies) from donors who live in the visited areas; hopefully, the cocktail of donated antibodies may protect them from endemic diseases. There is a danger that recipients will mount immune reactions to the antibodies themselves (which they will ‘see’ as ‘nonself’ proteins), resulting in immune complexes depositing themselves on the glomerular membranes of the kidneys (this is an example of type III complex-mediated hypersensitivity). Genetic engineering techniques are being pursued to develop high-affinity antibodies against rubella (German measles virus), etc.

Active immunization (vaccination) works on the principle of stimulating the individual’s own immune system to make antibodies, effector cells and memory T and/or B cells in response to the infectious agent, usually delivered in a dead or less virulent form. The aim is to provide effective immunity by establishing adequate levels of antibody and a population of memory lymphocytes which can expand rapidly on renewed contact with antigen. For poliomyelitis protection, high levels of blood antibody are desirable; in mycobacterial diseases such as tuberculosis, a macrophage-activating cell-mediated immunity is sought; cytotoxic T cells are most effective with influenza infection. The site of the response may be important – for cholera the response must be in the gut cavity to present adherence to and colonization of the gut wall. Immunizing antigens need to be cheap, safe (not injuring the recipient) and stable. Some types of antigen used are: