Sleep is a naturally occurring phenomenon. Though there are controversies regarding why, how, and what about sleep but the necessity of adequate sleep is universally accepted. Sleep is essential to provide physical rest and psychic equilibrium. It is referred to as the absence of wakefulness. The condition of lack of sleep is described as ‘insomnia.’ Hypnotics are the agents used to treat this condition.

These are the agents that induce sleep resembling natural sleep.

These are the drugs which reduces excitement. Hypnotics and sedatives both depresses the CNS, the difference being in the depth of CNS depression produced. In this respect, sedatives may be considered as mild hypnotics and vice-versa.

These agents are mainly classified into two classes viz. Barbiturates and Non-barbiturates.

These are further classified as follows : 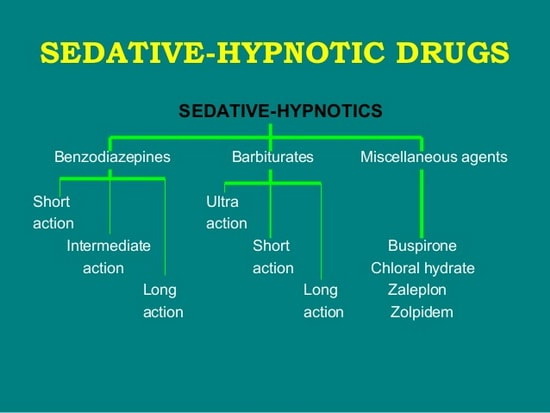 This is a class of structurally related compounds that reversibly depresses the activity of all excitable tissues (Nervous tissue, muscles). They can achieve various depths of CNS depression ranging from mild sedation to deep coma and death. The depth of depression produced depends on the dosage, route of administration, tolerance from previous use, degree of excitability of the CNS at the time of administration and condition of the patient.

Their mechanism of action is not yet clear but it is believed that barbiturates acts by depression postsynaptic sensitivity of chemical transmitters.

(iii) Anticonvulsant Effect: Barbiturates depresses both motor and sensory areas of the cerebrum and hence act as anti-convulsant. Phenobarbitone is used in combination with phenytoin to inhibit epileptic convulsions.

(iv) Analgesic: Barbiturates are not analgesic. Smaller doses of barbiturates increases the sensitivity to pain. Barbiturates enhance the analgesic effect of salicylates and paracetamol.

(vii) Effects on Gastrointestinal Tract: Therapeutic doses of barbiturates do not affect the motility of GIT. But in toxic doses they retard the peristalsis.

(ix) Effects on Liver: Barbiturates stimulate microsomal enzyme system in the liver, which results in accelerated metabolic degradation of barbiturates. This is one of the reasons for development of tolerance to barbiturates.

(i) Intolerance: These include excitement, vomiting, nausea, headache and diarrhoea.

(ii) Prolonged administration of phenobarbitone may cause anaemia.

(iii) Barbiturates given to women during labour may depress foetal respiration.

(iv) Barbiturates when used as hypnotic, because of forgetfulness the patient may repeatedly take it at night and poison himself. This is called “drug automatism.”

(v) Tolerance: Repeated administration develops tolerance because of increased metabolism of drug by microsomal enzymes of liver and adaptation of nervous tissue to the drug. It also produces cross tolerance to other general CNS depressants.

(vi) Dependence: Barbiturates on repeated use develop both psychological and physical dependence. Withdrawl of the drug may be difficult because of insomnia and disturbed sleep which results from the rebound increase in REM sleep. The withdrawl symptoms includes weakness, tremors, anxiety, excitement and even convulsions.

(vii) Acute Barbiturate Poisoning: Accidental overdose or consumption with suicidal intention leads to barbiturate poisoning. The characteristics of poisoning are weak but rapid pulse, shallow breathing, cold skin and paralytic dilation of pupils. The fatal complications are respiratory and renal.

(1) Gastric Lavage: Simple aspiration of gastric contents is helpful if carried out within three hours of barbiturate ingestion.

(2) Indotracheal Intubation: Adequate ventilation is most important in treatment of barbiturate intoxication. If respiration is not much affected it can be given by nasal cathetor. Indotracheal intubation is performed when spontaneous respiration is inadequate. Positive pressure respiration should be used to treat hypoventilation.

(3) Forced Diuresis: Barbiturate intoxication reduces urine output. As the unbound barbiturate is passively filtered into the urine, the barbiturate excretion can be increased by increasing the urine flow by forced diuresis. Forced diuresis is a dangerous procedure and should only be considered for those patients who are unlikely to survive with other treatment. Diuretics like mannitol and frusemide are used. Shock cardiac failure and renal impairment are absolute contraindications for forced diuresis.

(4) Alkalinization: Mild systemic alkalosis reduces the plasma concentration of non-ionised and diffusible form of barbiturates. This leads to withdrawl of barbiturate from the brain and CSF (cerebrospinal fluid) NaHCO3 is used for this purpose. Barbiturates are weak acids. One would assume that their reabsorption would be decreased if the urine is alkalinised. Forced diuresis is, however, most effective only for the long-acting barbiturates.

(5) Intravenous (I.V.) Fluids: These are helpful for forced diuresis in order to prevent dehydration. These are also useful for maintenance of blood volume. Normal saline with dextrose is used for this purpose.

Below mentioned are some important therapeutic uses of barbiturates :

(a) Benzodiazepines: It is a group of structurally related compounds that acts selectively on the components of CNS. The main site is limbic system, the region of brain concerned with emotions and anxiety. Apart from sedative hypnotic effects, they have anti-anxiety, anticonvulsant and central muscle relaxant effects. Those used as hypnotics includes nitrazepam, flurazepam, temazepam and diazepam. Those used as anticonvulsants includes mainly diazepam and  clonazepam. Chlordiazepoxide is mainly used as a sedative.

Diazepam produces sedation, reduces aggressiveness and thus, causes tranquility of mind. It increases total sleep time and impart a sense of deep or refreshing sleep. It increases the seizure threshold and acts as anticonvulsant. Diazepam given parenterally blocks convulsions induced by chemical and electrical stimuli in animals. It has central muscle relaxant action.

Many sedatives and hypnotics have been developed and used in the past, but many of them have now been replaced by safer and less toxic benzodiazepins.

Ideal hypnotic agent is one having rapid onset of action, a sufficiently sustained action and free from rebound effect by the following morning. The first two requirements largely depend on physiochemical and pharmacokinetic properties of the agent. From among the number of benzodiazepines differing in these properties, those fulfilling these requirements are preferred in clinical practice.

Therapeutic Uses: In addition to hypnotic and sedative agents these are also useful therapeutically as antianxiety agents, anti-convulsants, muscle relaxants, preanaesthetic medication and in anaesthesia.

Chloral hydrate: Chloral hydrate is a white crystalline substance, readily soluble in water. In the body, it is converted to a significant extent into trichloroethanol. It acts as rubefacient and is incorporated in liniments such as camphorated chloral when applied locally.

The principal effect of chloral hydrate in small doses is sedation. A slightly larger dose (1 gm) at bed time results in sleep. On oral administration, sleep is induced within 1 hour and continues for 4 to 5 hours or longer. The drug facilitates sleep induction, but does not affect sleep maintenance significantly. The patient can be easily aroused from sleep and the respiration and blood pressure are not much affected. It does not significantly alter normal sleep pattern. From practical point of view, it is a rapidly effective, reasonably safe and cheap hypnotic drug.

A sedative dose of chloral does not exert any significant anticonvulsant, analgesic, antitussive or antiemetic effect.

Paraldehyde: Paraldehyde may be given orally, intramuscularly or rectally. It is a safe hypnotic, not prone to depress cardiac function. It produces hypnosis in 15 min., which may last for 4 to 8 hours. The mechanism of action of paraldehyde is unknown. Its sedative-hypnotic properties may be effective in suppressing the withdrawal symptoms of alcohol, narcotics, and barbiturates. It may also be used to control seizures arising from tetanus, poisons, and status epilepticus.

(d) Hyoscine: It is used to prevent motion sickness by its sedative action and is very effective. It is also used to suppress unwanted secretions during anaesthesia and to reduce the skeletal muscle rigidity of paralysis agitans. Although sedative, hyoscine has no analgesic action and stimulates rather than depresses respiration.

The side effects are those of unwanted anti-muscarine-like actions such as dry mouth, loss of accommodation, and difficulty in micturition.