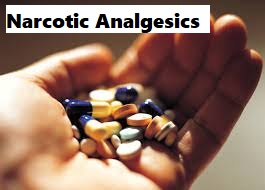 It is very difficult to define ‘Pain’, mainly because it cannot be measured objectively and it can only be felt by the person (subjective). Broadly, it can be described as an unpleasant sensation. It has two components viz. original sensation and the reaction evoked by this sensation (Psychological component). Though abolishing and/or modifying original sensation results in relief from pain but many times abolishing and/or modifying the psychological component of paining contribute more in relieving pain. Clinically, pain may be classified into three classes, viz. Acute, Chronic, and Psychogenic pain. Acute pain is temporary, severe, and has quick onset and subsidence. On the other hand, chronic pain is persistent, dull, and has gradual onset and subsistence. Psychogenic pain has no anatomical or physiological explanation and is exclusively a psychological condition :

“Analgesics” are the drugs that relieve or suppress the sensation of pain by acting on the Central Nervous System (CNS) but without producing any degree of loss of consciousness. The analgesics may either decrease the pain sensation or may make the patient unaware of the existing pain. Analgesics can be divided into two types according to their structures and mechanisms of action.

Opium contains two distinct types of alkaloids as under :

(i) Phenanthrin group of alkaloids, e.g. Morphine, Codeine, Thebaine. Amongst these only Morphine and Codeine have analgesic actions.

(ii) Benzyl isoquinoline group alkaloids: These include Papavarine, Noscapine, and Narceine. All three do not possess analgesic activity.

(I) Morphine: Morphine is the most important opium alkaloid used as a narcotic analgesic. In clinical practice, morphine sulfate or morphine hydrochloride is used.

(1) Actions on CNS: Morphine has biphasic actions on CNS. It depresses the cerebrum while the action on the medulla is both depression and stimulation.

(a) CNS depressant actions: Morphine by its depressant action on CNS abolishes all types of severities of pain without affecting other sensations such as touch, hearing, etc. It relieves mainly dull, constant pain rather than sharp, intermittent pain. It is most effective for visceral pain.

It depresses the heat-regulating centre in the hypothalamus and causes lowering of body temperature.

(2) Actions on the Gastro-intestinal tract (GIT): Morphine has spasmogenic action on the smooth muscles of GIT. It causes constriction of sphincters. It leads to a decrease in peristaltic movement and stagnation of intestinal contents. Stagnation of contents in the colon leads to maximum absorption of water and drying of fecal matter. Morphine also reduces the sensitivity of the defaecation reflex. This leads to constipation. This effect is of therapeutic value in the treatment of diarrhea.

(3) Other Smooth Muscle: Morphine increases the tone of the smooth muscles. Thus, there is constriction of bronchial and bladder muscles. It causes constriction of the internal bladder sphincter which leads to urine retention. Morphine constricts the pupil (miosis) by its central action rather than a peripheral action.

On oral administration, the drug is absorbed but its absorption is unpredictable. Absorption from subcutaneous sites is even and quick. It is also administered by the intramuscular route. It undergoes metabolism in the liver and is excreted in the urine.

After repeated administration, tolerance can be developed to the respiratory depressant action but not to the other actions. Addiction can also be developed. Addiction is a major drawback of morphine therapy. The withdrawal symptoms can be severe and even fatal. The symptom finally leads to cardiovascular collapse.

Two major lines of treatment are the administration of specific antagonists; Naloxone and gastric lavage. Naloxone 0.4 mg IV repeated every 2-3 minutes till narcotic reversal is achieved. Gastric lavage is useful to wash out the ingested drug and even when injected as it may be excreted in the stomach. The supportive treatment includes maintenance of respiration by artificial means, administration of IV fluids (5% Dextrose), and maintenance of adequate urine output.

(1) Morphine is basically used for the relief of all types of pain. It is the most powerful analgesic agent for visceral pain.

(2) Morphine is also employed as a pre-anesthetic medication.

(3) Morphine is also used up to some extent to induce sleep. Hence, can be used as a sedative.

(4) Morphine is a valuable drug in acute left ventricular failure.

(II) Codeine : Codeine is methyl morphine. It decomposes into methane and morphine in the body. Its pharmacological actions are similar to that of morphine. But its potency, as well as addiction liability, is less than morphine. It is less constipating than morphine. It is not a powerful depressant like morphine. It depresses cough centre hence, useful in the treatment of dry cough. It has a synergistic effect with non-narcotic analgesics like aspirin. Hence, it is found in compound analgesic tablets. The major advantage of codeine is that it can be given orally.

Therapeutic Uses: Codeine is mainly used as an antitussive, a mild analgesic, and an antidiarrhoeal drug.

(1) Heroine or Dimorphine Hydrochloride: Dimorphine is a semi-synthetic derivative of morphine in which both the hydroxyl groups have been acetylated. It causes similar analgesia and respiratory depression as morphine but less nausea, vomiting, constipation, and sedation. The analgesic action of dimorphine is more rapid than morphine but lasts for 2-3 hours only.

Dimorphine is very prone to cause dependence and its use is illegal in many countries.

(1) Pethidine (Meperidine): Pethidine is a synthetic drug unrelated to morphine and was found in a search for a spasmolytic drug with atropine-like properties. The difference between morphine and pethidine is described here.

(1) In the treatment of renal, biliary, and intestinal colics.

(2) In the treatment of pain in coronary thrombosis.

Side Effects: Sweating, nausea, thirst, dizziness, dryness of the mouth. Tolerance and dependence can develop.

(2) The Benzomorphans: The best-known member of this group is phenazocine which though more potent than morphine exhibits no outstanding differences.

A more recently developed compound is the narcotic antagonist, pentazocine. This can give analgesia comparable to morphine and also produces respiratory depression. The evidence at the present time is that pentazocine does not produce dependence which, if true, makes it a very important new drug.