Oogenesis means the formation of egg take place in the ovary of female animal. During oogenesis the cells of germinal epithelium detached from the surface epithelium and enter the cortex of the ovary. These germinal cells are diploid (2n) and are called primordial germ cell. These cells pass through the following three main phases to become the mature egg.

A) Phase of multiplication:

The primordial germ cells divide repeatedly by mitotic division and form the egg mother cell or oogonia. The oogonial cell divides repeatedly by mitosis and become primary oocytes, which then enter into a period of growth.

1. Previtellogenesis: It is characterized by the tremendous increase in the volume of the nucleus and cytoplasm of primary oocyte.

a) Growth of nuclear material:

The nucleus of the oocyte increases in size due to the accumulation of large amount of nuclear sap and the nuclei of advanced oocytes become flood fluid such inflated nuclei are often referred to as germinal vesicle. However, there is no increase in the amount of DNA in proportion to the enlargement of the nucleus. The nucleus then undergoes meiosis and enters into the first prophase. The homologous chromosomes pair together and increase in length. The chromosomes of primary oocytes develop thin loops on the side which look like bottle brush. Because of the brush like appearance, the chromosomes are specially designated as lamp-brush chromosomes.

Nucleolus also plays an important role in the synthetic activity taking place in the nucleus. The small nucleus may give rise to several nucleoli by fragmentation and budding. All these nucleoli come to lie near the nuclear membrane.

In young oocytes. the Golgi bodies occur around the centrosomes. As the oocyte matures the Golgi bodies assume the form of a large spherical mass especially in some mammals, while in frog and chick they become distributed in the sub cortical cytoplasm. In some animals they totally disappear. The endoplasmic reticulum, in young oocytes is in the form of numerous small vesicles, while in mature oocytes, ER appears as double membranous structure with no ribosomes.

1. Vitellogenesis:
Vitellogenesis involves the synthesis of yolk to be stored in the ovum. The yolk contains reserve food materials. The increase in volume of the oocyte during growth phase is largely due to the accumulation of yolk or nutritive substances in egg cytoplasm. Regarding the actual site of vitellogenesis (synthesis of yolk) there are two views. According to the first view, vitellogenesis takes place inside the oocyte itself, inside modified mitochondria. Ex. Amphibians and fishes. According to the second view yolk is synthesized outside the ovary and readymade yolk is transported through the blood stream to the oocyte. In most vertebrate yolk is synthesized into the liver and it 1s fat bodies in insects.

Two kinds of yolk are generally distinguished granular yolk and yolk platelets. Granular yolk occurs as fine granules, which are more or less uniformly distributed in the cytoplasm of oocyte. Ex. Echinoderms, tunicates, branchiostoma. In most vertebrates’ fishes, amphibians, reptiles and birds, yolk granules are large and localized in the cytoplasm of the oocytes. Such large granules are called yolk platelets. Role of follicle and nurse cell in oogenesis:
In several groups of animals, the growing oocytes are surrounded by special nutritive cells, follicle cells, and nurse cells.

The various chemicals, macromolecules, including yolk proteins, enter the oocyte pass through the desmosomes and microvilli. Thus, the follicle cells help in the growth of the oocyte.

In mammals, young oocyte and the surrounding follicle cells together constitute a graafian follicle. A mature graafian follicle consists of an eccentric cavity in the mass of follicle cells called antrum. The antrum is filled with a fluid called liquor folliculi. The cavity is surrounded by three layers inner membrane granulose, a middle theca interna and an outer theca externa. The oocyte which lies eccentrically in the follicle, is surrounded by some granulose cells called cumulus oophoricus. A homogeneous membrane which occurs between the oocyte and the follicle cells is zonapellucida.

The maturation phase is accompanied by maturation or meiotic division. Here after the meiotic division of the nucleus, the cytoplasm of the oocyte divides unequally to form a single large-sized haploid egg and three small haploid polar bodies or polocyte at the end. This type of unequal division has the great significance for the egg. If the equal divisions of the primary oocyte might have been resulted, the stored food amount would have been distributed equally to the four daughter cells and which might prove insufficient for the developing embryo. Therefore, these unequal divisions allow one cell out of four daughter cells to contain most of the cytoplasm and reserve food which is sufficient for developing embryo.

i. First maturation division: During 1st meiosis, the homologous chromosomes of the primary oocyte nucleus pass through the pairing or synapsis, duplication, chiasma formation and crossing over. Soon after the nuclear membrane breaks and the bivalent chromosomes move towards the opposite poles due to the contraction of chromosomal fibers. A new nuclear envelop developed around the daughter chromosomes by the endoplasmic reticulum. After the karyokinesis, unequal cytokinesis occurs and a small haploid polar body or ootid is formed. 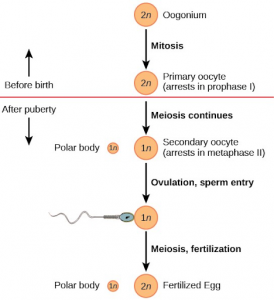