Organs of the immune system

Organs of the immune system are the “Thymus, Bone marrow, Spleen and Lymph nodes”

In our Immune system, a number of morphologically and functionally diverse organs are present and they have various functions in the development of immune responses and these lymphoid organs can be distinguished by functions as the-

Once mature lymphocytes have been generated in the primary lymphoid organ (bone marrow), they circulate in the blood and lymphatic system, a network of vessels that collect fluid that has escaped into the tissues from the capillaries of the circulatory system and ultimately returns it to the blood.

i) Development of CMI – Thymus is a primary lymphoid organ it is the site of T-cell development and maturation.

ii) Maturation of T cells – The function of the thymus is to generate and select a repertoire of T-cells that will protect the body from infection and will recognize antigen- MHC complexes and a small portion react with combination of self antigen-MHC complexes.

iii) Stock of lymphocytes – The stock of T-lymphocytes is built up in early life, so the function of the thymus is diminished in adults.

v) Protection from infections – T cells effectively protects the host from various infections. An improperly functioning immune system can cause discomfort, disease or even death. The type of malfunction falls into one or more of the following major groups: hypersensitivity or allergy, auto immune disease, or immunodeficiency. 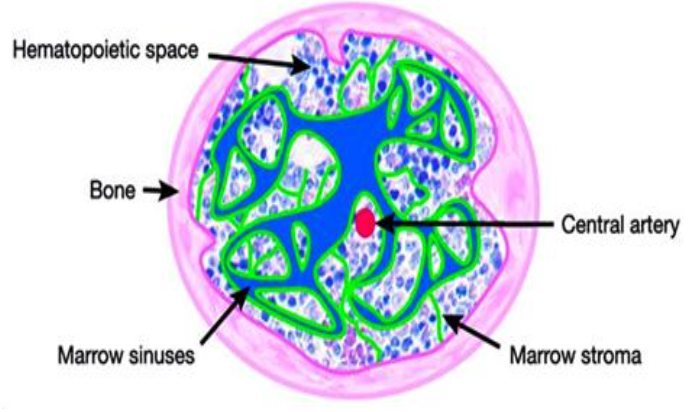 i) Hemopoiesis – Bone marrow is the major site for hemopoiesis all major blood cell types are produced in bone marrow.

Spleen is a secondary lymphoid organ. It is a large, ovoid organ situated high in the left of abdominal cavity. The spleen is surrounded by a capsule that extends a number of projections (trabeculae) in to interior to form a compartmentalized structure. The compartments are of 2 types i.e. red pulp and white pulp. These pulps are separated by a diffused marginal zone.

Nestled within the red pulp are compact regions of lymphocytes called as white pulp. B-cells and T-cells occupy separate predetermined areas of the white-pulp. The spleenic white pulp surrounds the branches of the spleenic artery, forming a peri-arteriolar lymphoid sheath (PALS) populated mainly by T-lymphocytes. The primary lymphoid follicles are attached to the periarteriolar lymphoid sheath (PALS). These primary lymphoid follicles are rich in B-cells and some of them contain germinal centers. The marginal zone. located peripheral to the PALS, is populated by lymphocytes and macrophages. The initial activation of B-cells and T-cells takes place in the T-cell rich PALS. Here interdigitating dendritic cells capture antigen and present it to combine with class-second MHC-molecules to TH cells. Once activated, B-cells, together with some TH cells, then migrate to primary follicles in the marginal zone.

i) Trapping of Ag – The spleen specializes in filtering blood and trapping blood-borne antigens, thus it can respond to systemic infections.

ii) Phagocytosis – The spleen serves as an important station for phagocytosis of foreign matter and immune reactions against bacteria.

iii) Removal of effete cells – Spleen serves to remove and breaks down worn (those cells which have completed their life span) erythrocytes.

Lymph nodes are the sites where immune responseis mounted to Ag in lymph. These are encapsulated bean shaped structures containing a reticular network packed with lymphocytes, macrophages, and dendritic cells. Lymph nodes are clustered at junctions of the lymphatic vessels.

As lymph percolates through a node, any particulate antigen that is brought in with the lymph will be trapped by the cellular network of phagocytic cells and dendritic cells.

Morphologically. a lymph node can be divided into three regions –

3) Medulla- The innermost layer of a lymph node, the medulla, is more sparsely populated with lymphoid-lineage cells: of those present, many are plasma cells actively secreting antibody molecules. 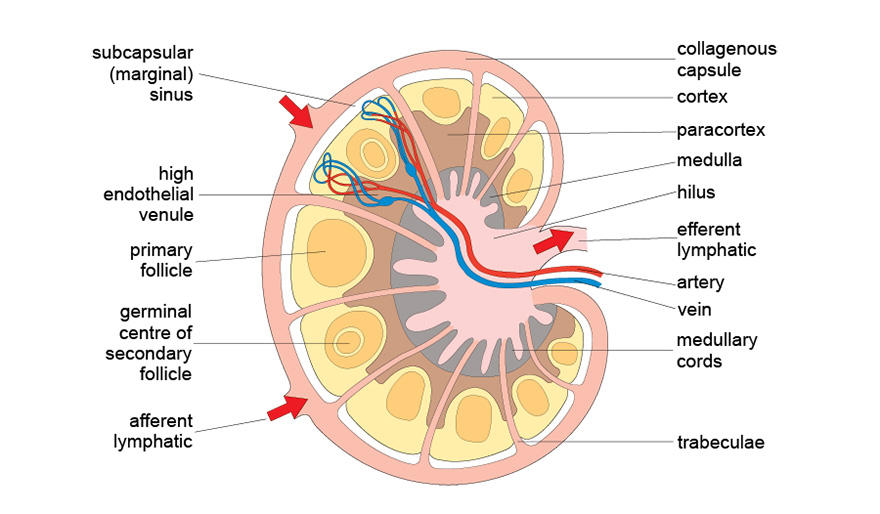 2) Filter – Lymph nodes acts as filters for filtering out materials that have entered the lymph and providing appropriate cells and niches for immune reactions.

3) Storage of cells – The cortex area of lymph nodes is rich in B cells, Macrophages, and dendritic cells.