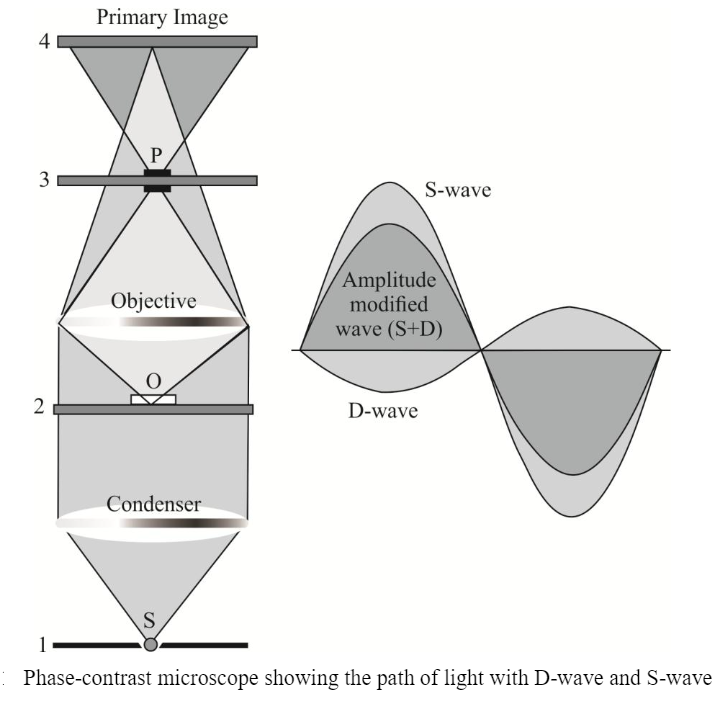 1. In various fields – The phase contrast microscope have wide applications in the fields of molecular and cellular biology, microbiology. and medical research.

2. Estimation of intracellular components – Phase contrast microscopy is useful to estimate the concentration of a substance within the cell or cell range.

3. Wet mount and hanging drop – It is useful for examining wet mount of hanging drop preparations for the observation of the internal structure of specimen in living condition.

4. Growth, cell division, and cell movement – It is useful for the examining growth and cell division in bacteria, flagella movement, intestinal and other protozoa such as Amoeba, Trichomonas, etc., living blood cells. cytopathic effects of viruses on tissues.

5. Intracellular components – Useful in the study of bacterial components like endospores, inclusion body containing Poly-beta-hydroxybutyric acid (PHB), polymetaphosphate, and sulfur granules. They are visible because they have a refractive index different from water.

7. Observation of cells in living conditions – One of the major advantages of phase contrast microscopy is that living cells can be examined in their natural state without being killed, fixed, and stained. As a result, the dynamics of ongoing biological processes in live cells can be observed and recorded in high contrast with the sharp clarity of minute specimen detail. Specimens that can be observed and studied include live microorganisms such as protozoa, erythrocytes, bacteria, molds and sperm, thin tissue slices, lithographic patterns, fibers, glass fragments, and sub-cellular particles such as nuclei and organelles.

1. The capacity to observe living cells and, as such, the ability to examine cells in a natural state.

2. Observing a living organism in its natural state and/or environment can provide far more information than specimens that need to be killed, fixed, or stain to view under a microscope.

5. Ability to combine with other means of observation, such as fluorescence.

In addition, advances to the phase-contrast microscope, especially those that incorporate technology, enable a scientist to hone in on the minute internal structures of a particle and can even detect a mere small number of protein molecules.

1. Annuli or rings limit the aperture to some extent, which decreases the resolution

2. This method of observation is not ideal for thick organisms or particles

4. Images may appear grey or green, if white or green lights are used, respectively, resulting in the poor photomicrograph