There are about 90 species of hemichordates. All are marine and live in the open ocean or in muddy sediments. Hemichordata were once included in the phylum Chordata, and were grouped with the invertebrate chordates as ‘protochordates’: like chordates, they have a dorsal nerve cord, often hollow, developed from the dorsal epidermis. The short, longitudinal, stiffening stomatochord is not now thought to be the homolog of the notochord, and this distinction justified the separation of the Hemichordata from the Chordata. Fossil hemichordates are known from Ordovician times (450 million years B.P.), and forms similar to hemichordates have been described from the Cambrian Burgess shale. The extinct graptolites may be near relatives.

Hemichordata are triploblastic, bilaterally symmetrical coelomates with unsegmented bodies divided into three regions. They usually possess pharyngeal gill-slits. The body is divided into a prosome, mesosome and metasome, each with a coelomic cavity (cf. lophophorate phyla).

Enteropneusts possess a rod ventral to the anterior diverticulum of the pharynx, which has a stiffening function. Formerly known as a stomatochord, it was once thought to be the homolog of the chordate notochord.

Respiratory gas exchange is across the gill-slits which have vascularized regions beneath their surfaces, and across the general body surface; there is a low pressure circulatory system with contractile ventral and dorsal vessels linked by open sinuses. In the prosome is a pulsatile ‘heart’ which pumps blood through the open circulatory system.

Nitrogenous wastes are voided by diffusion through the body surfaces.

There are normally mid-dorsal and mid-ventral nerve cords, linked by nerve rings and sub-epidermal nerve nets.

The hemichordates have separate sexes; fertilized eggs subsequently follow a deuterostome pattern of development. In enteropneusts, development may be via a tornaria larva, or directly into a miniature adult. Sexual reproduction by fragmentation also occurs. Pterobranchs reproduce sexually and asexually by budding.

The pterobranchs are small (<8 mm) marine forms, usually colonial, living in secreted tubes. They have lophophore-like, ciliated tentacles mounted on a shield, and feed on small, suspended particles. The gut is U-shaped: two, or no pairs of pharyngeal gill-slits may be present. Examples include Rhabdopleura sp.; Cephalodiscus sp. 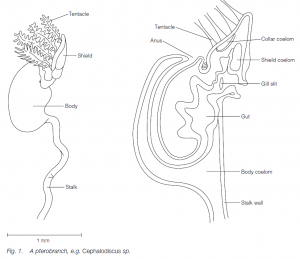 The marine acorn-worms are solitary. They have a proboscis instead of a shield and tentacles, a collar, and a long, vermiform (worm-like) body containing a straight gut with numerous gill-slits. Examples are Dolichoglossus sp.; Balanoglossus sp.