In girls, the onset of puberty is marked by the menarche, the first menstrual (monthly) period: the ovary has secreted sufficient steroid hormones to induce uterine development, although ovulation may not occur until later. Menarche is preceded by a series of changes over 2–5 years, dependent on secretion of sex steroids from the ovaries and the adrenals. The sequence of changes is constant, but can take varying periods of time and start at different ages. In boys, the onset of puberty is harder to define, although the first emission of semen could be taken as a starting point: there are probably no viable spermatozoa yet.

There is minimum growth velocity in a child before ‘take-off’ up to the adolescent growth spurt.

Puberty enhances secondary sexual characteristics (breast development in girls, penis and scrotum enlargement in boys, thickening of vocal cords in boys, growth of facial hair in boys and body hair in boys and girls). Gametogenesis is initiated in the final stages of puberty.

Control is by the hypothalamus–anterior pituitary–gonad axis. In childhood, the portal capillary link between the hypothalamus and the anterior pituitary is undeveloped. Development of this link in late childhood allows gonadotropin-releasing hormone (GnRH) to reach the pituitary which synthesizes and releases gonadotropins (LH and FSH). These act on the gonads to stimulate synthesis and release of sex steroids (e.g. estradiol, testosterone). Estradiol enhances pituitary prolactin, PRL release in girls. An alternative theory states that increased body mass dilutes concentrationsof melatonin from the pineal gland. Melatonin inhibits GnRH pulses in childhood.

Pineal tumors with high levels of melatonin do delay puberty. Pulsing GnRH into an immature female monkey leads to establishment of ovulatory cycles and ‘puberty’: the pituitary and gonads respond to the GnRH instantly and maintain a ‘conversation’ through feedbacks to the component parts of the hypothalamus–pituitary–gonad axis. If the GnRH is switched off, the monkey reverts to pre-puberty. Thus levels of LH, FSH and PRL are low in childhood but during  puberty they rise to adult levels. In early puberty, LH pulses during sleep; later it pulses during the day too. Such rhythms are not present in childhood but do occur inadulthood. Testosterone levels in the plasma are less than 10 ng 100 cm–3 in boys and girls before puberty; in early puberty, testosterone levels rise to 20–240 ng 100 cm–3 during sleep in boys. In girls, estradiol levels rise through puberty to reach 50 pg 100 cm–3 in the follicular stage of the menstrual cycle and 150 pg 100 cm–3 in the luteal stage. (In pubertal boys, estradiol levels are higher than during pre-puberty, but much lower than in pubertal girls.) 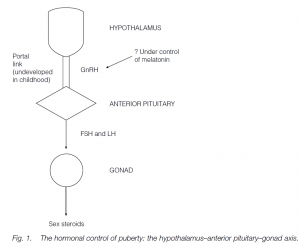 Adrenal androgens start to rise by 8 years of age, continuing to rise until 13–15 years in both girls and boys, preceding gonadotropin/gonadal steroid secretion. This adrenarche is one of the first pubertal hormonal events and promotes pubic and axilliary hair growth.

Within individuals, the age of puberty varies enormously (e.g. in girls from 9 years to 16 years). The trigger for puberty is unknown. There has been a trend towards earlier menarche in girls and earlier puberty in boys (for girls in 1880 this occurred at 14–15 years, in 1980 at 12–13 years) although this may reflect biased sampling (e.g. deprived children in 19th century asylums). Higher social standards including nutrition and better general health have been suggested as causes for earlier menarche, as have longer photoperiods associated with the use of electric lighting (although blind girls attain the menarche no later than sighted girls).

Nutrition seems a better candidate: indigenous peoples from northern Scandinavia who ate the same diet from 1870 to 1930 experienced no earlier puberty; patients with anorexia nervosa are amenorrhoeic (do not menstruate). Body weight at menarche is surprisingly constant at 47 kg in girls; the figure for boys is 55 kg. Thus body weight may trigger the onset of puberty (obese children have early puberty; gymnasts and ballet dancers with low weight to height ratios have delayed puberty). How such factors act on the development of the hypothalamus–pituitary links are not known, although increased body mass may ‘dilute out’ melatonin from the pineal gland.