The signal recognition particles (SRP) is an abundant, cytosolic, universally conserved ribonucleoprotein( protein-RNA complex ) that recognizes and targets specific proteins to the ER in eukaryotes and the plasma membrane in prokaryotes.The eukaryotic SRP is composed of 6 distinct polypeptides bound to an RNA molecule with GTase activity. The components are SRP6 SRP14, SRP19, SRP54, SRP68, SRP72 & SRPRNA while in prokaryotons it is composed of only one polypeptide bond to an RNA molecule,its components of the complex are 5th and 4.5 SRNA.

Free ribosomes synthesis mostly soluble proteins whereas RER bound ribosomes manufacture transmembrane proteins and protein destined for secretion. These large protein molecules pass through the RER membrane. Gunter Blobel, Cesar Milstein, and David Sabatini formulated “signal hypothesis” which partially explain how this happens. These proteins are synthesized with leading ( N – terminal ) signal peptide. A signal peptide first protrude beyond the ribosomal surface after a little growth. At this stage a complex of polypeptide and RNA molecule called signal recognition particle binds to ribosome which arrest further polypeptide growth and prevent it from being released in the cytosol. The SRP – ribosome complex diffuses to the RER surface, where it is bounded by the SRP receptor,which stimulate the bound ribosome to resume polypeptide elongation and facilitates the passage of growing polypeptides N – terminal through the membrane into the lumen of RER. After entry of polypeptide, signal peptide is removed in the presence ofsignal peptidase enzyme. The other enzyme of lumen cause post translational modification of still growing polypeptide chain. When protein synthesis is completed, secretary, ER and lysosomal proteins pass completely through the RER membrane into the lumen. Transmembrane proteins remain embedded in the ER membrane with their c – terminal on its cytoplasmic side. 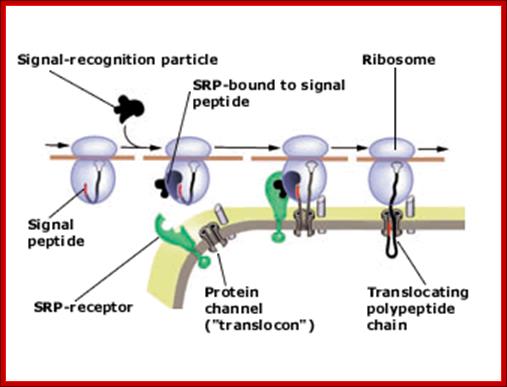