The selectively synthetic antimicrobial agents interfere with the functions of DNA and RNA. Some are sulphonamides and diaminopyrimidines  which achieve their effect indirectly by interrupting metabolic pathways that lead to the manufacture of nucleic acids; others, of which the quinolones and nitroimidazoles exert direct actions. 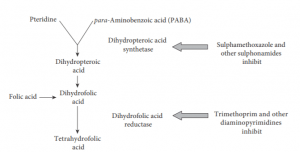