The heart is a muscular pump whose walls are largely made up of cardiac muscle anchored in a fibrous cardioskeleton. Blood returning from body tissues enters the right atrium (right auricle) through two great veins, the anterior and posterior venae cavae . Blood returning from the lungs enters the left atrium (left auricle) through pulmonary veins. The atria are thin-walled priming pumps which expand as they receive blood. Both contract simultaneously, pushing the flow of blood through open valves into thick-walled ventricles. 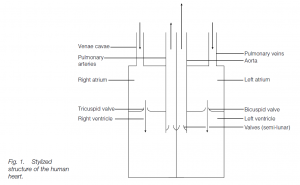 The right ventricle propels deoxygenated blood into the lungs through the pulmonary aorta (trunk) which branches to form right and left pulmonary arteries. The left ventricle propels oxygenated blood into the systemic aorta whence it travels to the body tissues via the arterial system. The right atrium and the right ventricle are separated by the tricuspid valve (with three flaps) ; the left atrium and the left ventricle are separated by the bicuspid (or mitral) valve with two flaps.

Each flap is thin and strong. The broad base is anchored into the fibrous cardioskeleton. Attached to the free end are tendinous cords (resembling the cords of a parachute) continuous with muscle. As blood flows into the ventricle in late diastole, the flaps lie against the ventricle walls. As the ventricle contracts in systole, the flaps come together and the atrioventricular openings are closed. 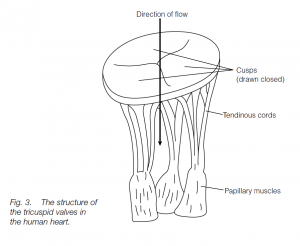 The tendinous cords prevent the flaps from everting into the atria. Semi-lunar valves between the right ventricle and the pulmonary aorta, and between the left ventricle and systemic aorta, close after ventricular contraction, preventing a back-flow of blood. 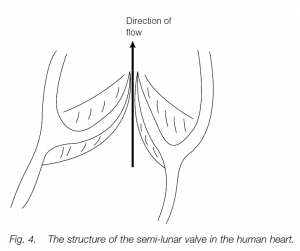 In adult humans the heart beats at about 72 beats per minute. The outflow, pumping phase of ventricular contraction is systole, and the inflow, filling phase is diastole. The total volume of blood pumped by the heart is the cardiac output.

Stimulation of cardiac muscle cells originates in the muscle itself: the heart will continue beating if it is removed from the body and kept in an oxygenated nutrient solution. In the embryo, the heart begins to beat early in development before it is innervated. This is called myogenic beating or autorhythmicity (compare the neurogenic beating of an insect heart).

The initiating pacemaker is the sinoatrial node (modified cardiac muscle) in the right atrium: pacemaker cells can spontaneously initiate their own impulse and contract. The impulse then spreads along the muscle cells through the right and left atria, causing them to contract almost simultaneously, as the wave of excitation passes over individual muscle cells: the impulse travels very quickly across gap junctions between adjacent cardiac muscle cells. About 100 mseconds after the pacemaker ‘fires’ impulses traveling through special conducting fibers, the atrial muscles themselves stimulate a second area of nodal tissue, the atrioventricular node.

From here, impulses are carried by special muscle fibers (in the bundle of His which branches and ends as Purkinje fibers emerge) to the walls of the right and left ventricles which then contract almost simultaneously. Although the fibers in the bundle of His conduct impulses very speedily, the atrioventricular node has slow-acting fibers: thus a delay is imposed between atrial and ventricular contractions, allowing time for ventricular filling.

Heartbeat rate can be modified by the autonomic nervous system: parasympathetic fibers from the vagus nerve secrete acetylcholine which decreases the heart rate; sympathetic fibers secrete noradrenaline (norepinephrine) which stimulates the heart, as does adrenaline (epinephrine) from the adrenal medulla. The activity of the nerves controlling the heart rate and the strength of the heartbeat are under the control of the cardiac centers of the medulla oblongata (hind-brain).

There are separate cardioacceleratory and cardioinhibitory centers: these control sympathetic and parasympathetic innervation of the heart (and also nerve fibers controlling contraction of arterioles; see above). Thus, if there is a significant increase in blood flow in exercise due to dilation of blood vessels, the heart is simultaneously stimulated to beat faster, developing more pressure to support blood flow. The regulating center integrates reflexes controlling heart rate (and also stroke volume and force of contraction), together with blood pressure. Raised carbon dioxide levels (and lowered pH) in exercise also stimulate the heart rate.

High blood pressure (sensed by baroreceptors in arterial walls) following exercise will decrease heart rate, as will a high oxygen tension in the blood. Higher brain activity (e.g. the fight/flight/fright syndrome) leads to a release of adrenaline (epinephrine) which accelerates the heart.

Stroke volume is regulated by either increasing or decreasing the force of contraction of the heart, under the control of sympathetic stimulation of the ventricles and by changes in the inflow of blood. There is a relationship between the strength of muscle contraction and the resting length of the muscle fibers. The amount of blood returned to the heart by the veins is the major factor regulating the degree of heart filling: the more the ventricles are filled during diastole, the more blood will be ejected in systole. This is the Frank–Starling law of the heart; the heart takes in and pumps out the same amount of blood during a cardiac cycle. In exercise, the body muscles massage the great veins which act as a blood reservoir – this increases inflow, stretchesthe heart and increases the stroke volume and force of contraction, thus aiding blood flow (and oxygen supply) to exercising tissues.

The heart muscles receive their blood from arteries branching from the aorta: this is the coronary circulation. The coronary arteries receive about 5% of the oxygenated blood flowing to the body. The blood drains via coronary veins to a coronary sinus which empties into the right atrium. Flow is regulated by homeostatic feedback mechanisms reflecting metabolite build-up and blood pressure.