Cell signalling is the respond to extracellular signals produced by other cells or by themselves. This allows cell-cell communication and is necessary for the functional regulation and integration of multi-cellular organisms.

These are of five major types- 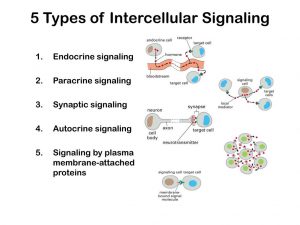 Cell signalling molecules and their mechanism of action