DNA repair is a set of processes that a cell uses to detect and repair damage to the DNA molecules that encode its genome.

Photoreactivation is a type of DNA repair mechanism. It is the recovery of ultraviolet irradiated damages of DNA by visible light. As the name suggests, it is a light-dependent process.

In this DNA repair method, cells recover their DNA after UV exposure-induced damages. The photo repair of pyrimidine dimers by DNA photolyase and model systems A mechanism is proposed for the in vitro reaction of E. coli DNA photolyase which involves photoreduction of the FAD radical cofactor followed by electron donation to the dimer from the excited singlet state of reduced FAD. 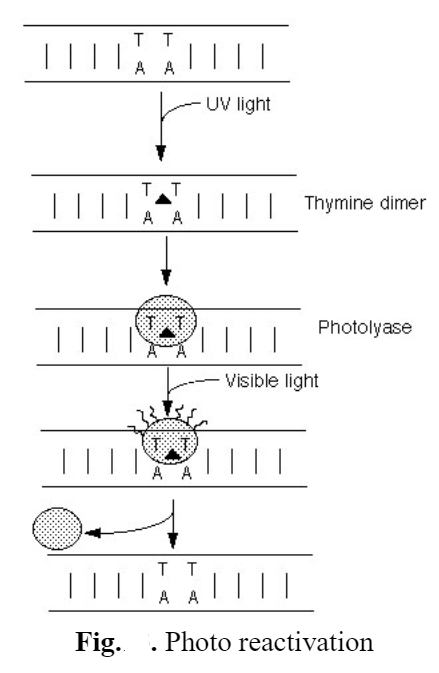 1. UV light strikes one of the adjacent thymines, creating a thymine dimer.

2. DNA photolyase recognizes the kink in DNA and binds that site.

3. When excited by blue light (345-400nm wavelength)the photolyase change conformation. DNA photolyase coded for by Phr genes allows bacteria to repair the thymine dimers caused by UV exposure. Folate is used to harvest light energy which is quickly transuded to FADH making it FADH2. The now electronically excited FADH2 can transfer the high-energy electron to the dimer, causing the structure to break apart into separate T molecules again.

It is a cellular mechanism that repairs damaged DNA throughout the cell cycle. It is responsible primarily for removing small non-helix distorting base lesions from the genome.

It is DNA repair in which a mismatched or modified base is excised. then replaced. There are two pathways for this to occur. Both pathways start with the base mismatch/modification being recognized and a glycosylase removing the base from the sugar-phosphate backbone. After this step the pathways branch.

Although the UvrABC endonuclease-mediated excision repair in Escherichia coli is biochemically well-characterized, it is not clear how damaged DNA is recognized and how the components of this system identify this broad substrate range. We are attempting to address this problem by the structural characterization of the individual proteins of this system and their complexes both with and without their substrates, using x-ray crystallography supported by biochemical and biophysical methods. As a complementary approach, we apply atomic force microscopy (AFM) in collaboration with the Tessmer lab to obtain images of these complexes under physiological conditions.

DNA mismatch repair is a system for recognizing and repairing erroneous insertion, deletion, and misincorporation of bases that can arise during DNA replication and recombination, as well as repairing some forms of DNA damage. During DNA synthesis the newly synthesized (daughter) strand will commonly include errors. 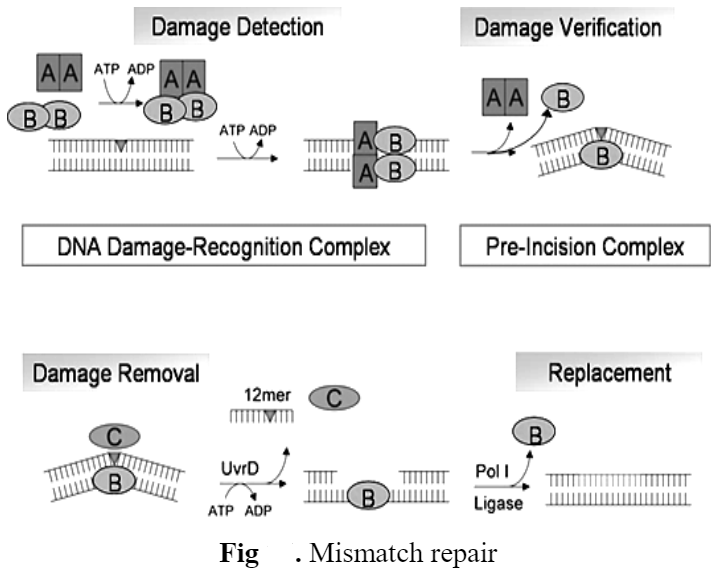