The damage caused to the structure and sequence of a DNA helix must be repaired by the cellular machinery before efficient replication and transcription can begin again. If the damage is not repaired, then the mutation will become inherited by subsequent generations. The existence of modified bases signals the induction of systems designed to remove specific types of damage. Some types of damage can be corrected by an enzyme-catalyzed reversal of the nucleotide modification, but more lasting damage means that stretches of one strand of DNA must be removed and replaced with new nucleotides. There are limitations to the capacity of the cell to repair its own DNA in that in most cases the repair machinery relies on a correct template against which to make corrections. If both sides of the helix, i.e. both base pairs, are damaged, then the cell is less likely to correct the error. Thus events that cause deletion of regions of the DNA are more likely to be inherited than those that only damage one strand, or a few bases of one strand, of the helix.

Although DNA repair systems are extremely efficient in organisms such as the Bacterium Deinococcus radiodurans  and the Archaeon Pyrodictium abyssi, there is a greater error in DNA repair mechanisms than in DNA replication. The systems described here are specific for the Bacteria, but analogous ones exist in the Archaea and the eukaryotes.

The DNA polymerases themselves have the ability to proofread nucleotides during replication. As such this provides a first line of defense in order to preserve the integrity of the genome. However, this system cannot cope with bases that have been extensively modified and sometimes proofreading can cause mutation in the regions of DNA modification.

Despite the high fidelity of DNA replication, and the backup proofreading system, it is still possible for the incorrect base to be opposite a template base. To fix such potential mutations, the repair mechanism must have some way of distinguishing between the template strand and the daughter strand synthesized against it. In many bacteria a mature chromosomal DNA has methylated bases at the sequence GATC. Daughter DNA strands experience some delay in methylation, so newly replicated DNA spends some time in a hemimethylated form (template strand methylated, daughter strand not). The methyl-directed mismatch repair mechanism can identify correctly the nonmutated strand by means of methylationrep. The system can only resolve single base-pair mismatches and needs the participation of Dam methylase, MutH, MutL, MutS, DNA helicase II, single-stranded binding protein, DNA polymerase III, exonuclease I, exonuclease VII, RecJ nuclease, exonuclease X, and DNA ligase. 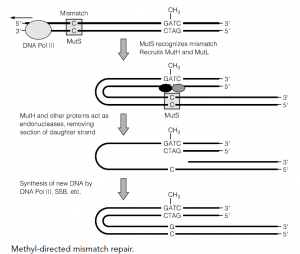 The removal of many nucleotides (by UvrABC exinuclease) and their replacement (by DNA polymerase I and DNA ligase) is ubiquitous in the Bacteria. In E. coli this mechanism has been shown to be largely error-free. It enables the removal of large areas of mutation, e.g. as a result of the presence of pyrimidine dimers, and is thus known as nucleotide excision repair (NER). The UvrABC system scans the genome and initiates the process in regions of distortion of the helix . Nucleotide excision repair differs from base excision repair in that the entire nucleotide is removed, causing a complete break in one strand of the helix.

Some mutagenic events lead to the modification of the base part of the nucleotide. The action of the base modifiers can sometimes be corrected by very specific DNA glycosylases, which break the ribose-base glycosyl bond. This leaves the backbone of the DNA strand intact, with some sites depurinated or depyrimidinated. These apurinic or apyrimidinic sites (AP sites) are then removed by AP endonucleases. In contrast to NER, only one or two nucleotides are removed. The DNA strand is made entire again by the action of DNA polymerase I and DNA ligase, by the same mechanism as outlined in NER. The abnormal bases repaired by base excision repair (BER) include uracil, hypoxanthine, xanthine, and alkylated bases. In some organisms it is also the mechanism used to resolve pyrimidine dimers.

In addition to proofreading and the excision repair mechanisms, the Bacterial cell has a range of mechanisms for correcting chemical changes in DNA in situ. The DNA photo-lyases are used for photoreactivation or light repair of pyrimidine dimers, and proteins such as O6 -methylguanine-DNA methyltransferase (the Ada protein) can repair the effects of alkylating agents such as MMS (methylmethane sulfonate). This transferase is unusual in that it is not an enzyme in the strictest sense of the word. The methyl group is directly transferred to the Ada protein, which renders it completely inactive. Thus it cannot participate in another reaction, so does not play a catalytic role.

Should the base pairing between strands still remain incorrect, the Bacterial cell has a final mechanism to excise corrupted DNA. This mechanism may actually result in the persistence of mutations in the next generation, but prevents the accumulation of mismatches to the point where they become lethal. Normally a protein called LexA represses an overall response, but as mismatches accumulate, the concentration of another protein (RecA) also rises. A high concentration of RecA causes the cleavage of LexA. In the absence of LexA, 17 genes are turned on which constitute the SOS response. This system quickly resolves all DNA mismatches, but does not distinguish between parental and daughter strands. The cell can continue replication, but this response is extremely error-prone.