Gram staining is important and widely used technique. It is used to differentiate two large groups of bacteria based on their different cell wall components. The gram staining technique was developed by Dr. Christian Gram in 1884. Gram stain distinguishes between Gram-positive and Gram-negative groups by coloring these cells violet or pink. Gram-positive bacteria stain violet due to the thick peptidoglycan layer in the cell wall. Whereas, Gram-negative bacteria stain pink due to the thin peptidoglycan layer. This technique also allows the determination of cell morphology, size, and cell arrangement.

Principle and Mechanism of Gram Staining:

In the case of Gram-negative bacteria cell wall contains a higher percentage of lipids which is 11% to 25%. When we apply alcohol (ethanol) as a decolorizer, these lipids get dissolved in it. The permeability of the cell wall increases and the CV-I complex gets easily extracted. Therefore, the cell becomes colorless and accepts secondary stains i.e. safranine. Gram-positive bacteria contain less amount lipid (4% to 8%) in their cell wall. When ethanol is applied cells are dehydrated and shrinkage occurs. Pore size decreases and the CV-I complex is retained inside the cell so they appear violet in color due to crystal violet.

Gram-negative bacteria have a thinner layer of peptidoglycan (10% of the cell wall) and lose the crystal violet-iodine complex during decolorization with the alcohol rinse, but retain the secondary or counterstain Safranine, thus appearing reddish or pink.

Magnesium ribonuclease is present only in Gram-positive bacteria with which CV-I complex forms a covalent bond. Therefore, the CV-I complex is retained and cells appear violet in color.

According to them lipoidal content of Gram-positive bacteria contains a large amount of unsaturated fatty acids. These fatty acids are having more affinity for oxidizing agents (Gram’s iodine). The oxidizing product of lipids is more acidic. Therefore, acidic conditions developed which results in increased affinity for basic stain. In Gram-negative bacteria, less amount of unsaturated fatty acids so an acidic condition is not developed therefore they have less affinity for primary stain. 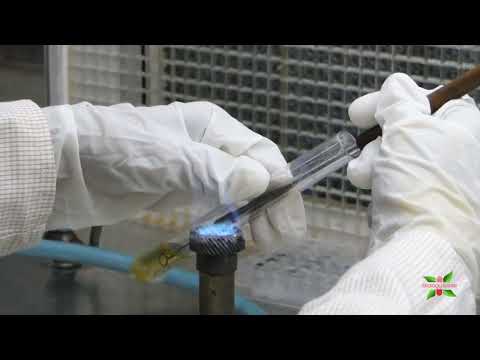 1. Age of culture: Old cultures of Gram-positive bacteria lose the ability to retain primary stain. Therefore, even though they are Gram-positive they may appear pink. So, the culture should be 18 – 24 hours old.

2. Excessive heat fixation: Too much heating results in loss of Gram positivity.

3. Overcrowding: If the number of bacteria present in the smear is very much high, every cell will not come in contact with a decolorizer which may result in a wrong interpretation. The smear should be thin.

5. Air drying: For good results, first air drying and then heat fixation is done. If a wet smear comes directly in contact with heat, there will be charring of bacteria and total distortion of shape and structure take place.