Structure and Properties of HIV 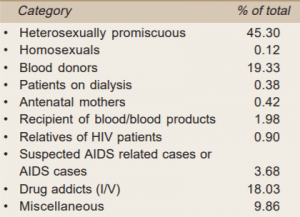 10 minutes’ treatment at 37°C can inactivate this virus, with:

i. Cultivation of T lymphocytes: T lymphocytes of regular lymphocytes are cultured with interleukin on special cell lines (Hg, HUT78 U937). T cell stimulation and multinucleated giant cell demonstration can be performed within 2 to 20 weeks. It is the traditional way of verifying HIV infection.

ii. Detection of reverse transcriptase: It is possible on virus grown cells by radiolabeling.

Antibodies to HIV usually appear in 6 to 8 weeks after the exposure to the virus. The following methods are simple, easy, and quite useful to diagnose AIDS patients.

v.Dot blot hybridization.
vi. Agglutination tests using RBC/latexgelatin, colloidal gold, Immuno dot/strip, and PAT (particle agglutination tests).
vii. Detection of antibody to nef gene product (27 KD protein) along with p20 and gp120.
viii. Fujerbio agglutination test: In this test, antigen-coated gelatin particles are
agglutinated by antibodies present in the serum of the patient. It is quite a simple and convenient test. However, false-positive reactions do occur.
ix. Karpas test:

They are direct predictors of HIV infection and are:
1. Low CD 4 cells
2. Low B2 microglobulin
3. Increased neopterin