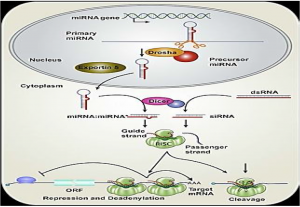 Translation Repression by miRNA is triggered by deadenylation of the poly-A tail and then mRNA sequence decapping. As a result, the mRNA sequence becomes unstable and is degradable. The abundance of mRNA is diminished and the translation reduces thereafter. Proof implies miRNA.

The miRNA binds to the RISC and attacked the 3’UTR of the mRNA sequence similar to the previously mentioned method. However the miRNA: RISC complex to the 3’UTR is intended to activate an event series that prevents initiation proteins from binding to the 5′ cap of mRNA rather than to induce deadenylation to trigger declines in mRNA.

A third possible mechanism of miRNA action involves posttranscriptional regulation after the miRNA: RISC complex binds the mRNA target by translocating the miRNA:mRNA complex to cytoplasmic foci in the cell, referred to as processing bodies (P-bodies). P bodies do not contain translation ribosomal proteins but have enzymes and translation repression and mRNA turnover factors.