Spermatogenesis is a continuous process of sperm formation. It is divided into two steps as under,

The cells of germinal epithelium when produced spermatozoa are called primordial germ cells. It undergoes the following phases,

a. Phase of multiplication: The undifferentiated primordial germ cell contains a large-sized and chromatin-rich nucleus; it undergoes repeated mitotic cell division and becomes sperm mother cells or spermatogonia. Each cell is 2n (diploid) and enters into the phase of growth.

b. Phase of growth: During this phase, the spermatogonial cells accumulate a large amount of nutrition and chromatin material. Their volume becomes doubled and each cell is called the primary spermatocytes. It is 2n (diploid) in nature.

Each secondary spermatocyte undergoes a second meiotic or maturation division which is just like that of mitosis and produced 2 spermatids, which is haploid (n). Thus, at the end of meiotic division, a diploid spermatogonium produces four spermatids, which are non-functional male gamete, to become functional spermatozoa they have to undergo a process of differentiation or specialization, the spermiogenesis. 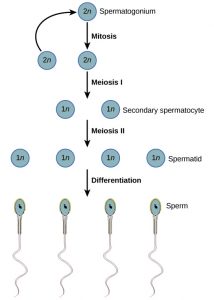 Differentiation of spermatids into the sperm is known as spermiogenesis. The sperm is a very active, motile cell, and this motility is provided by discarding superfluous material of developing sperm or spermatid. The (n) spermatid is a typical cell containing a nucleus and cytoplasm. The cytoplasm contains mitochondria, centrioles, and Golgi bodies. The two major parts of the spermatozoon are, the head and the tail (midpiece, principal piece, and end piece)become differentiated.

A] Formation of head:

a) Changes in the nucleus: The nucleus of spermatids shrinks by losing much of water from the nuclear sap and assumes different shapes in different animals. The DNA becomes more concentrated and the chromatin material becomes closely packed. RNA, most of its proteins, and nucleolus are greatly reduced.

b) Acrosome formation: The acrosome of spermatozoan is derived from the Golgi bodies of spermatid. During acrosome formation, one or more vacuoles of Golgi bodies start enlarging and occupy the place between the tubules of Golgi bodies. Soon after a dense granule known as the proacrosomal granule develops inside the vacuole. The proacrosomal granule attaches with the anterior end of the nucleus and enlarges into the acrosome. The membranes of Golgi vacuoles form the double membrane sheath around the acrosome and form a cap-like structure of the spermatozoa. The rest of the Golgi bodies becomes reduced and discarded from the sperm as Golgi rest.

B] Formation of tail:

b) Mitochondria: Most of the mitochondria concentrate around the proximal part of the axial filament to form the middle piece of the spermatozoon tail. The tail of sperm comprises an axial filament which remains differentiated into a principal piece and end piece.

c) Change in the cytoplasm: Just prior to the termination of spermiogenesis, most of the cytoplasm is discarded from the sperm, but the plasma membrane forms an envelope around the head, middle piece, and main piece of the tail. The end piece of the tail remained naked and hence consist of only terminal parts of the axial filament.